Her Baby Bump's a Real Killer in 'Prevenge'

Talk about a pre-natal nightmare! Alice Lowe’s Prevenge speculates what it’s like to carry to term a homicidal fetus.

Mothers-to-be hear no end of commentary about their bodies. Advice, always plentiful from doctors and strangers, is patronizing: “Baby knows best. Baby will tell you what to do.” What to do then, when the actual stranger whose riding along for nine months starts piling on with advice?

A new horror thriller, Prevenge raucously probes the split between a pregnant heroine’s body and mind when she hears the gruesome advice of her nearly-born fetus. He-she-it is a goblin-voiced life coach, who says: “Kill.” 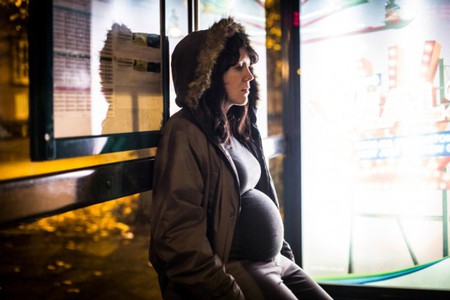 Alice Lowe’s movie captures the dreadful sense of being lost in your own skin, trapped in a distorted cartoon of your body–your flesh having embarked on a killing spree of its own making.

Lowe–the film’s British writer, director, and star–plays Ruth, first seen eight months pregnant and weeping inconsolably as she walks a rocky cliffside in Wales, considering her options. Known for her comic performances in films like Hot Fuzz and Sightseers, Lowe had previously directed award-winning short films, but she felt frustrated that her career had stalled, especially after she conceived. Working fast, she wrote and filmed Prevenge during the seventh and eight months of her pregnancy.

The velocity shows. The movie’s humor is crude, for example, but Lowe’s singular vision wowed audiences on the festival circuit, and it opened strongly in the UK in February.

Though set at Halloween, Prevenge has no supernatural elements–unless one counts Ruth’s obsession with a 1930s screen siren who looks like a raging catwoman. Herself disguised with cat-eye mascara and a daubed on rictus smile, hooded and armed with a knife, Ruth wanders an unnamed city, wreaking revenge on the people she blames for her boyfriend’s death in a climbing accident.

The serial killing urged by Ruth’s unborn child stems from grief. Like the recent hit Get Out, Prevenge swings from horrific to hilarious to melancholy. Unlike Get Out, Prevenge becomes less bloody, not more so, as it hurtles toward its climax. 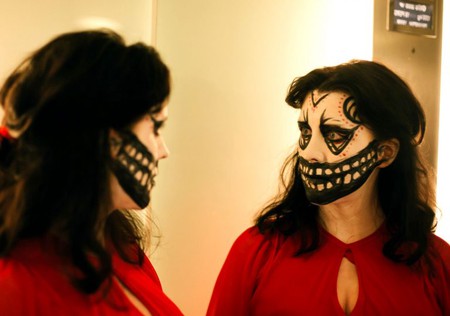 In the most disorienting sequence, Ruth stalks a nightclub DJ with “Baby” egging her on. Her victim, “Disco Dan” (Tom Davis), drunkenly confides that he digs “fat chicks” because they “don’t care what happens to their bodies.” (“Glass houses,” Ruth replies, eyeing up Dan’s soft midsection.) As they mount his apartment-house stairs, seen in a dizzying overhead shot, it’s not clear who’s in more danger: she or him.

Like Alfred Hitchcock, Lowe associates the dark at the top of the stairs with sexuality and danger. Hitchcock’s stairway-climbs, in Blackmail, Vertigo, and Psycho, ended with women taking the fall. Prevenge twists that narrative, then flips it again. Post-kill, pre-partum, Ruth makes her getaway wrapped in her late boyfriend’s oversize parka, penguin-waddling into the night.

Lowe—whose own daughter, now a year old, makes a cameo appearance in the movie—cannot resist skewering every last “What to Expect When You’re Expecting” cliché. In calmer moments, Ruth annotates her kill list in a “baby’s first steps” scrapbook.

Prevenge arrives amid a cluster of smart new horror movies and socially aware thrillers, including Get Out and Raw, that push at the boundaries of what audiences can endure. They are not more revolting than earlier gross-out films—such as those produced under the New French Extremity banner at the start of the 21st century—but they all challenge assumptions and prejudices.

The French film Raw, about a bullied veterinary student, will put you off meat-eating, maybe for life. Similarly, Get Out, in which the underlying secret is a racist underground, uncovers the reasons for the hero’s shame and grief concerning his dead mother.

Prevenge, too, is anchored in mourning. Ultimately, it’s a widow’s tale. Consider Ruth, lying in the bath, barely able to see over her distended belly, splashing water at her drowsy baby bump. She’s all alone. Perhaps that’s why moviegoers who can’t stand the sight of blood can relate to Prevenge‘s savage swerves. Widowhood is the last stage of so many women’s lives. Ruth, in a rare lucid moment, confesses that she’d swap her newborn child “to have him back”— to see her man alive again.