Hail the Temptress of "Anatahan!" 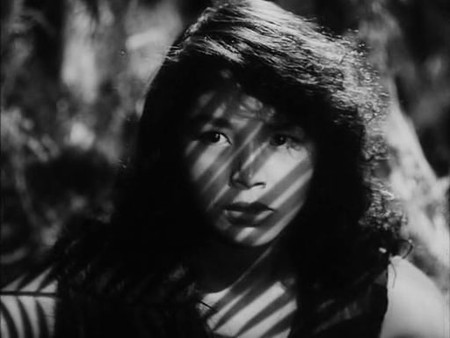 Josef von Sternberg’s lush swan song explored the ruinous effect of desire on a group of Japanese seamen shipwrecked on the North Pacific island of Anatahan in 1944. Isolated from World War II, they fight a war of their own—over “the only woman on earth.”

Anatahan (1953), which has been newly restored and released on Blu-ray and DVD by Kino Lorber, was filmed on a threateningly primordial jungle set created in a converted hangar in Kyoto. The opportunity to make his Orientalist movie without anyone’s interference 5,681 mi. (9,143km) from Hollywood had been welcomed by Sternberg, who wrote, directed, photographed, and narrated it.

The supreme Hollywood studio artificer of the 1930s, Sternberg was also an arrogant and disdainful autocrat who had been dumped by Paramount in 1936 after completing the last of his seven masterpieces of mordant exotica starring Marlene Dietrich. His career had dwindled in the intervening years; until Anatahan arrived, The Shanghai Gesture (1941) alone recalled the mastery he had demonstrated in his prime. 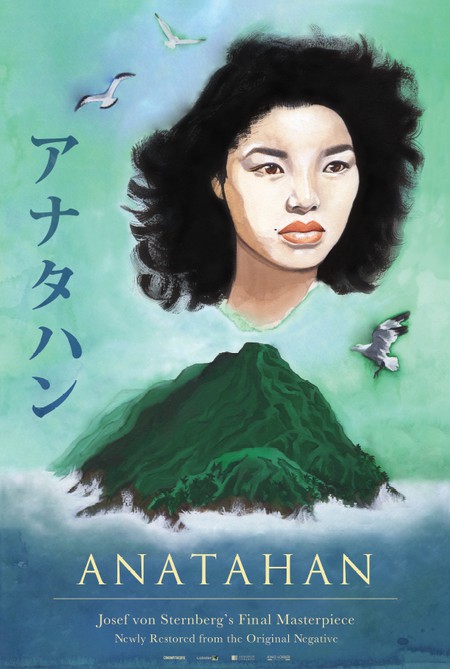 Though Anatahan was nominally adapted from a story by Michiro Maruyama, whom Sternberg didn’t trouble to consult during the year-long production, it depicts (and eroticizes) real events. In June 1951, 12 Japanese soldiers who had refused to believe the war had ended were rescued from Anatahan, a volcanic rock in the Northern Marianas, and repatriated.

Their departure had been preceded a year earlier by the flight of Kazuko Higa, the mistress of a coconut plantation overseer on the island and its sole female inhabitant. In June 1944, over 30 survivors from three Japanese ships sunk by American planes had swum to safety on the island.

After the overseer died, Higa allegedly ruled Anatahan as its “Queen Bee” and object of male obsession, though she may have been used as a sex slave. Each of the five men she cohabited with (she said it was four) was murdered; it’s believed 11 men were killed fighting for her favors. Alerted that she was going to be executed, she escaped after flagging down an American ship.

On her return to Japan, Higa was briefly a celebrity who told her titillating story on a “burlesque tour.” She may have subsequently run a stripper bar in Tokyo, reunited with her pre-war husband and opened a teahouse in her native Okinawa, or become a high-school principal. She died at the age of 51, around 1968. 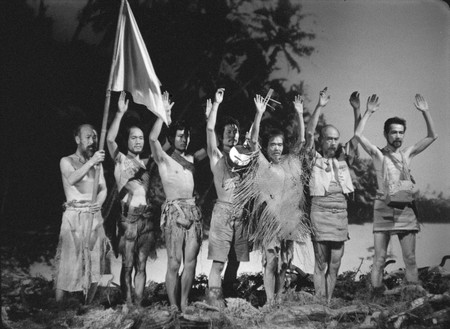 In Sternberg’s film, 12 Japanese merchant seamen compete, some more ardently than others, for the planter’s woman, Keiko (played by the 19-year-old cabaret dancer Akemi Negishi, who later acted in Throne of Blood (1957) and other Kurosawa films). Though wilfully provocative and promiscuous, Keiko is not a classic femme fatale, but a girl testing the limits of her power, who doesn’t know who or what she wants—except to bask in the men’s desire.

A self-consciously contemptuous chronicler of amour fou and male sexual enslavement to enchantresses like those iconographically incarnated by Dietrich, Sternberg saw in Anatahan the opportunity to make his definitive statement on the ridiculous power lust exerts, in robbing man of reason.

He didn’t make Keiko a sexist construct, but the castaways do, and many of them pay for their folly—like the bourgeois schoolteacher (Emil Jannings) beguiled by Dietrich’s nightclub singer in The Blue Angel (1930). When in thrall to desire, Sternberg suggests, people have no more control than the goldfish he shows flitting around the screen in Anatahan‘s opening credit sequence.

Nature gives no quarter. Sternberg photographed the dense jungle created by his all-Japanese crew as a vegetative version of a primordial swamp, where every plane of sunlight is fragmented by dark shadows via a style that blends impressionism and film noir. Equated with Keiko’s innocent appetites, this Rousseau jungle is a voracious Eden that eats everything, from men without sense, to military hardware.

At one point, several of the seamen find the carcass of an American B29 Superfortress rotting in the jungle (one from Saipan was shot down over Anatahan in January 1945); they seize the dead crewmen’s handguns, having intuited that they might one day need to shoot each other. That downed bomber anticipates the boat that Spanish conquistadors see improbably lodged in a tree beside the Amazon in Aguirre, Wrath of God (1972), and the crashed American chopper, similarly aloft, by the Nung River (the Mekong) in Cambodia in Apocalypse Now (1979).

In a video essay included on the Kino Lorber disc, the film scholar Tag Gallagher draws attention to Keiko’s narcissism. He also describes, quietly but caustically, how the sailors have been reduced, in their anti-social state, to the laws of libidos and firearms (though he doesn’t put it so decorously).

Outtakes from the film feature frank closeups of Negishi’s breasts and medium-long shots of her seen from behind as she perches on rocks and stares out to sea. Sternberg was a cold humanist who valued moral self-discipline over sexual self-indulgence. More than likely, he didn’t photograph Negishi pruriently, or for his own delectation. He bequeathed to his possessive planter and the randy seamen the masochism that he visited on the Dietrich characters’ tormented admirers. Experiencing lust for Negishi, but not acting on it, would have helped Sternberg communicate to his actors (despite his lack of a common language with them) the seamen’s mad desire for Keiko. 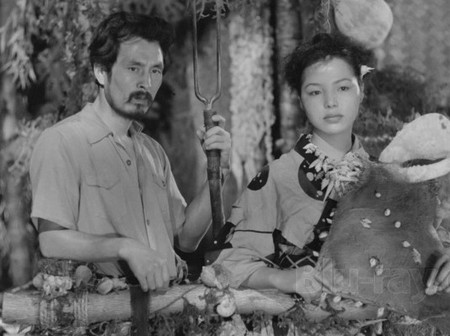 Typically, Sternberg paraded his own sense of sexual defeat on screen. As he had done in the Dietrich films The Blue Angel, (1930), Morocco (1930), Shanghai Express (1932), and The Devil Is a Woman (1935), he cast in Anatahan a gloomy actor resembling himself to play a man morbidly and fatalistically in love with the amoral temptress, who symbolically emasculates him as she gives herself to others. With his Fu Manchu moustache and depressive presence, the heavy-set Tadashi Suganuma was alarmingly Sternbergian as the disgruntled, wife-beating planter. The feisty Keiko, to her credit, hits him back.

If Anatahan has a fault, it’s Sternberg’s weighty voiceover narration, which overlaps with and sometimes contradicts, or bizarrely counterpoints, the Japanese dialogue, for which no subtitles were supplied. Pontificating about the emotional and psychological conflicts in the film, Sternberg comes across as the kind of pompous bore one should avoid at parties. Yet he may have been putting us on by playing the role of the supercilious movie aristocrat. He must have known that the primal truths inherent in his poetic visual storytelling rendered tedious his lofty, cerebral pronouncements.

Sternberg was only 59 when the movie was released on June 28, 1953, He hoped to direct again, but Anatahan proved his last. It was “my best film—and my most unsuccessful one,” he would note in his 1965 autobiography. Few critics would agree it is his best; he no doubt thought it was because it enabled him to perfect his vision of film as a plastic art form, and because it was virtually a solo project.

Interviewed for the disc, Sternberg’s son Nicholas, who was a toddler in Kyoto during Anatahan‘s production, talks with quiet respect and some sadness about his father’s truncated career. It remains one of the greatest careers in film, while the gorgeous, dismaying Anatahan has few rivals as a movie maestro’s swan song.