Get to Know the Notorious B.I.G.'s Bed-Stuy Beat 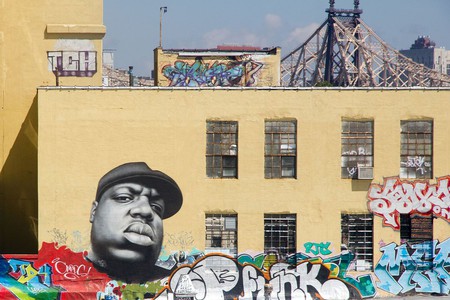 The Notorious B.I.G. democratized hip hop, transforming it into a political weapon for 1990s Brooklyn youth—and for people around the world. Traverse his old haunts and see with your own eyes, the tight sphere of Biggie Smalls’s childhood turf on the edge of Bedford-Stuyvesant. Here’s where to unearth fossils of local pride and see where Biggie got inspiration for some of the most influential lyrics of all time. 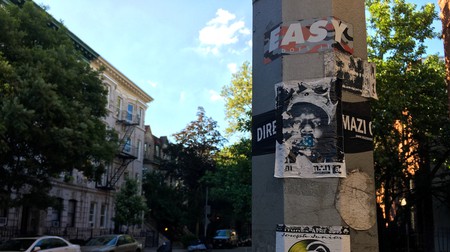 Begin your walk by entering the home-style Country House Diner on the corner of Vanderbilt Avenue. Biggie mentions their “T-bone steak, cheese eggs, and Welch’s grape” in his 1994 song “Big Poppa.” In it, he raps about his girl driving to “steam [smoke a blunt] on the way to the telly [hotel], go fill my belly.”

Afterwards, walk for one minute down Fulton Street until you reach the corner of Clinton Avenue adjacent to Yafa Deli & Grocery. 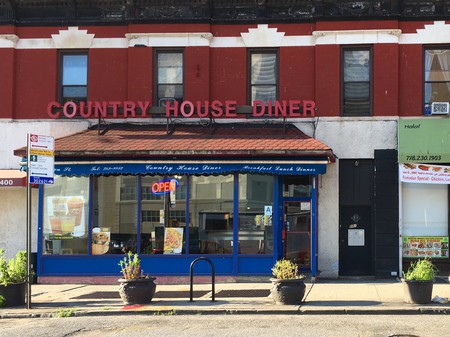 Pause briefly at the Clinton-Washington Avenue subway station to appreciate a location featured 1:34 seconds into one of the most acclaimed music videos in hip-hop history: Biggie’s “Juicy,” which at the time of writing has nearly 104,230,000 views on YouTube.

Walk down Fulton Street for three minutes until you pass Washington Avenue and reach Golden Crust Bakery on your right. 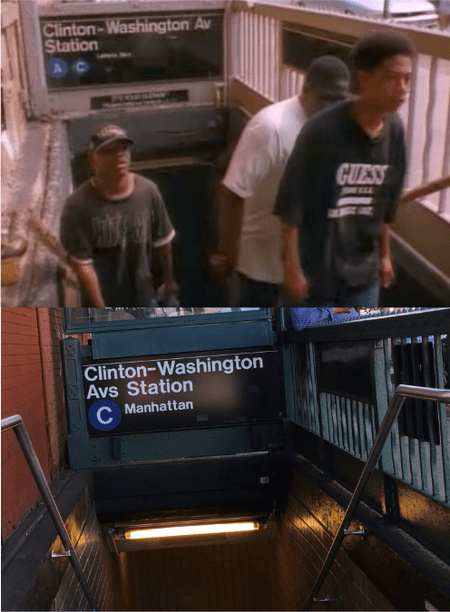 Step into the orange glow of this outlet, formerly known as Patty Place Bakery. His mom, Voletta, was born in Jamaica and so Biggie grew up with Caribbean food.

Continue walking down Fulton Street for one minute and cross to the opposite corner on St. James Place. 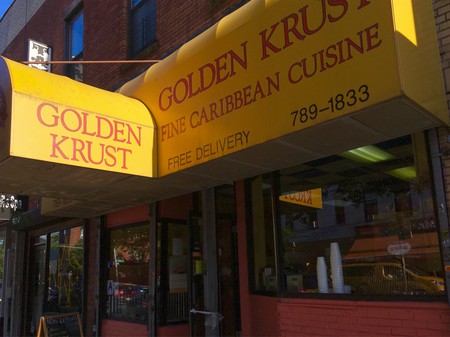 Pay a visit to Chadler Smith, the barber who cut Biggie’s hair from 1987 until his death in 1997. Smith was like a brother to the rapper and is eager to spill memories of Biggie’s regular visits. Smith also commissioned a seven-foot mural to be painted outside the Life Barber Salon—it’s impossible to miss.

Cross the street to arrive at Key Food. 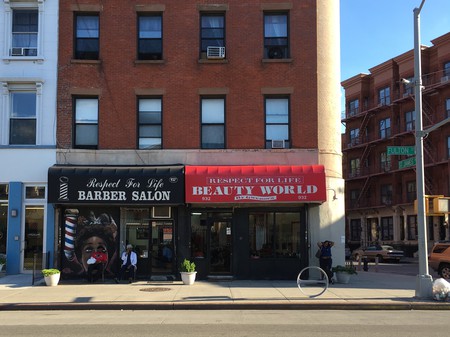 After taking a look at the stained-glass mural left of the Key Food building (formerly a Met Food Supermarket), step into the grocery store to meet owner Wakeem Widdi, who says he was a father figure to young Biggie (born Christopher Wallace in 1972), from the time since his mom Voletta would “wheel him around here in a shopping cart when he was a baby.”

Biggie was known around the store for his chill demeanor. “Sometimes he would walk in and be like, ‘Can I get a beer? I’ll pay ya later,” Widdi recalls. The store owner also remembers his love of words: “Biggie loved rapping. He used to do it all the time in here. I used to tell him to shut up!”

This March, Widdi honored the 20th anniversary of Biggie’s death and the immense pride the M.C. brought to Brooklyn with limited edition grocery store bags featuring his image. 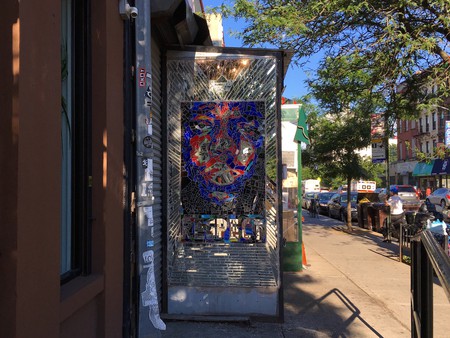 Stop by the underground club the Orient Temple where Biggie and Junior M.A.F.I.A performed their earliest freestyles. The space has since been converted into a special-events venue. 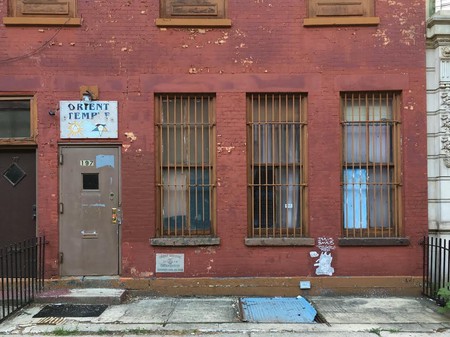 Stand below Biggie’s childhood home where he lived with Mrs.Wallace in apartment 3L for most of his life. He would often change out of his street clothes before entering the apartment to prevent his mother from suspecting him of dealing.

Biggie described this three-story building as his “one room shack” in “Juicy,” dramatizing the success he achieved after beginning his career as a 12-year-old drug dealer on the Bed-Stuy streets. The conditions that existed in this area in the 1990s forged a generational desire for upward mobility that Biggie satisfied in his lyrics by sculpting his own version of the American Dream.

The third floor, now a renovated three-bedroom, one-bathroom apartment, was listed by Sotheby’s International Realty in 2013 for $725,000.

Turn left and walk back to Fulton Street for 30 seconds, stopping at the corner of St. James Place. 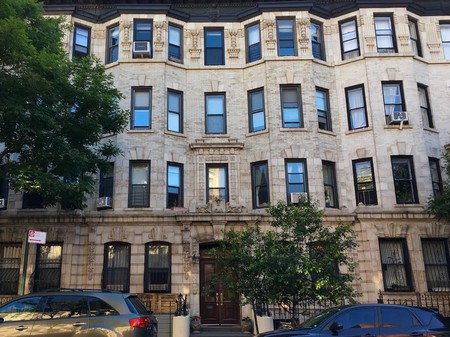 Around 10p.m. most nights circa 1990, Biggie could be found standing on this corner, drinking St. Ides and Colt 45 malt liquor, shooting dice, and pushing crack with his cronies.

The windows above the building are likely the same ones that people would “call the police on [Biggie] when he was trying to make some money to feed his daughter [T’yanna],” as he raps in “Juicy.” If you look up at the right side of the building, you’ll notice that the awning has fallen to reveal the liquor store sign that was pictured in an article on aspiring rappers in a 1994 edition of The Source.

This was Biggie’s corner—where he was crowned “The Mayor of St. James.” 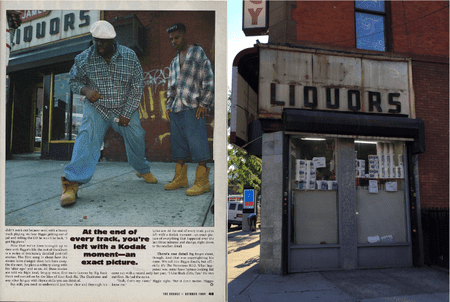 Glance diagonally across the street at the corner of the barber shop building. Do you notice any hints of white paint? These are the remains of Biggie’s 1997 memorial.

It was painted the day after he was killed in a drive-by shooting following a Vibe magazine party promoting his album Life After Death. Biggie was pronounced dead on March 9 at 1:15 a.m., at Cedars-Sinai Medical Center in Los Angeles.

His death was one of the tragic byproducts of a commercial feud between the East Coast hip-hop scene (Biggie, Junior M.A.F.I.A., Puff Daddy) and that of the West Coast (Tupac Shakur, Dr. Dre, Snoop Dogg).

But even though he’s gone, the Notorious B.I.G. remains bigger than life, and his mark on Brooklyn is indelible. 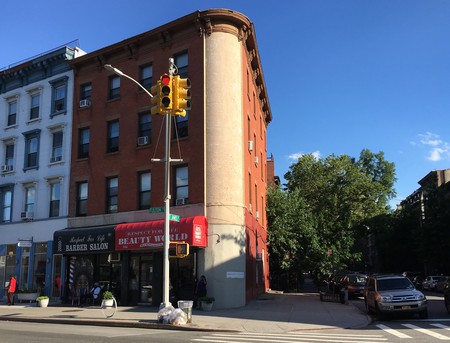 Read here about Fashion Looks Inspired by the Notorious B.I.G.