Fruit Sandwiches Are All the Rage at Newcomer "The Fruitsand" 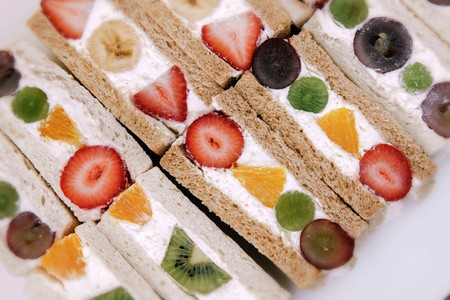 Tucked away in NoHo’s Bowery Market is The Fruitsand. This newly arrived Japanese transplant specializes in its eponymous “fruit sand,” a sweet sandwich pocketed with sliced fruit and an airy mixture of whipped cream and cream cheese.

These sandwiches originated in the kissatens (tea and coffee houses) of Japan—a light, refreshing snack to compliment an otherwise bitter cup of coffee. It’s typically consumed during breakfast and lunch hours, but occasionally emerges as a dessert as well.

“People have been eating fruit sandwiches with coffee in Japan for almost a century now,” Yuki Yamauchi, manager at The Fruitsand, explains.

With New Yorkers’ undeniable devotion to coffee—and the steady stream of chic and bean-forward shops like Blue Bottle, Counter Culture Coffee, and La Colombe firmly taking over the city’s streets—it makes perfect sense for The Fruitsand to set up shop here. 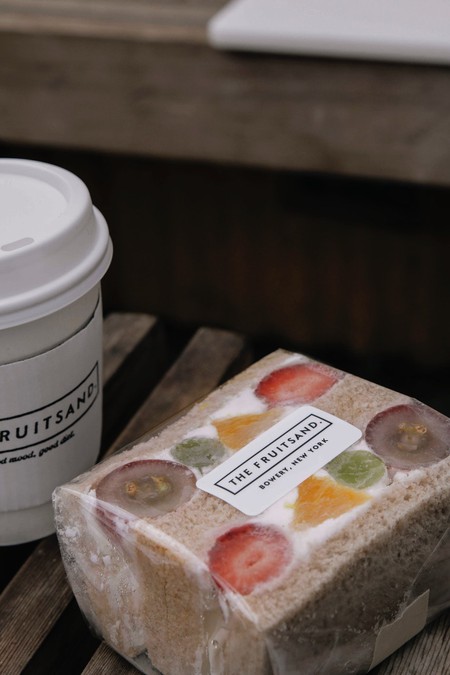 At Fruitsand, the fruit sandwiches resemble large tea sandwiches: squat rectangles filled with whipped cream and cream cheese, crowned with sliced fruit. Fruit combinations run the gamut from strawberry and banana to mango and kiwi, and you can often find the sandwiches dotted with grape halves and orange slices. The whipped cream filling can be infused with chocolate or matcha for a more potent flavor, and there are tofu versions for the dairy-averse.

This filling is hugged by two thick slices of Japanese milk bread, the deep brown crust chopped off to preserve a perfect, simplistic symmetry. It’s the milk bread, or shokupan, that separates these sandwiches from the rest. 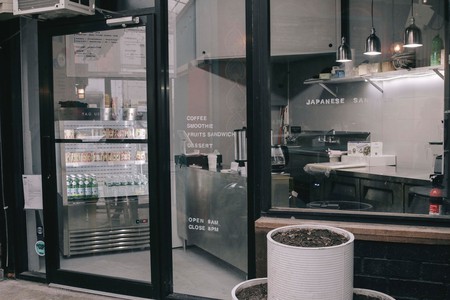 The Fruitsand is teeny, only comfortably fitting one or two people | © ND Kim

Milk bread is ubiquitous in bakeries across Asia, as well as in Asian chains stateside, like Fay Da in Chinatown. It’s made from tangzhong, a mixture of flour and water (the same ingredient used to make springy Chinese buns). The aerated bread lends itself as the perfect vehicle to support a mass of fruit and cream without getting soggy.

The Fruitsand shop itself is teeny—there’s room for perhaps one or two people to fit comfortably—but it’s designed to be a quick service arena, flaunting easy-to-snag grab-and-go items. The many colorful sandwiches, which are pre-prepared and slipped into a translucent plastic sheath, line the shelves of a small fridge. For those itching for something a little smaller, The Fruitsand also sells chocolate-covered bananas and strawberries, as well as a rotating seasonal variety. The rest of the store is devoted to making a host of hot and cold coffee drinks, as well as smoothies, to pair with the many sandwiches.

The Fruitsand is located in the Bowery Market, at the corner of Great Jones Street and The Bowery. Sandwiches ring in at $9, with vegan ones priced at an extra $2.