From Graffiti to Instagram Murals: The Evolution of SoHo’s Street Art 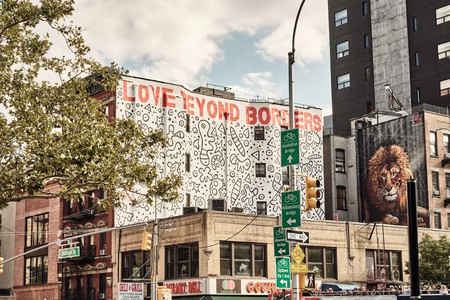 As New York’s SoHo transitioned from a bohemian stronghold into a luxury shopping destination, its graffiti and street art evolved, too. Now that the outlaw art form has largely given way to murals commissioned by big-name brands, can the neighborhood maintain its artistic integrity?

The paint has barely dried on Eduardo Kobra’s new mural and already people are flocking to Manhattan’s Lower East Side to see it. A man in his early twenties uses the Brazilian artist’s work as a backdrop for a dorky-cute photo shoot. “Just try one more,” his female companion says, angling an iPhone while he leaps and twirls in front of the likenesses of five deceased musicians – all members of the ill-fated 27 Club. He pops a hip and makes a peace sign, a cheeky tongue poking from the corner of his mouth. 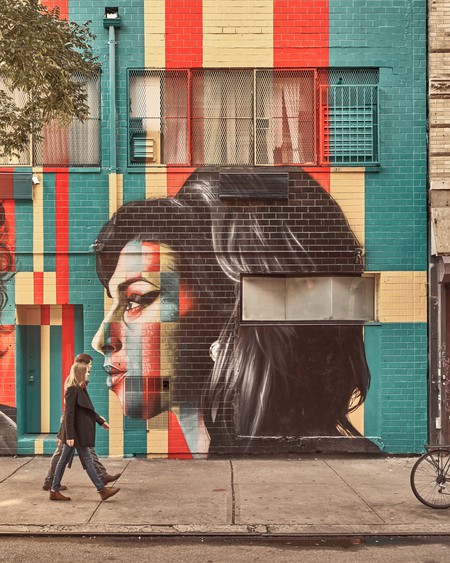 Kobra’s piece is in good company. This particular enclave of Lower Manhattan, at the intersection of SoHo, the Lower East Side and Nolita, has a long history of painted walls. Over the past decade and a half, some of the neighborhood’s most famous graffiti and street-art spots, like 11 Spring Street, 190 Bowery and The Candy Factory, have been sold to real estate developers – their canvases wiped clean to make way for shiny multimillion-dollar condominiums. But street art is far from over. Sanctioned and sponsored muralism is booming, raising the profiles of artists, brands and even the neighborhoods the art springs up within.

“In my mind street art and muralism are two separate entities,” explains Katherine Lorimer, author of (Un)Sanctioned: The Art on New York Streets. “Street art to me is kind of the smaller DIY things that people are capable of producing [like tags, stencils, wheat pastes and stickers], whereas muralism is an entirely different beast. It’s street art on steroids, if you will.” 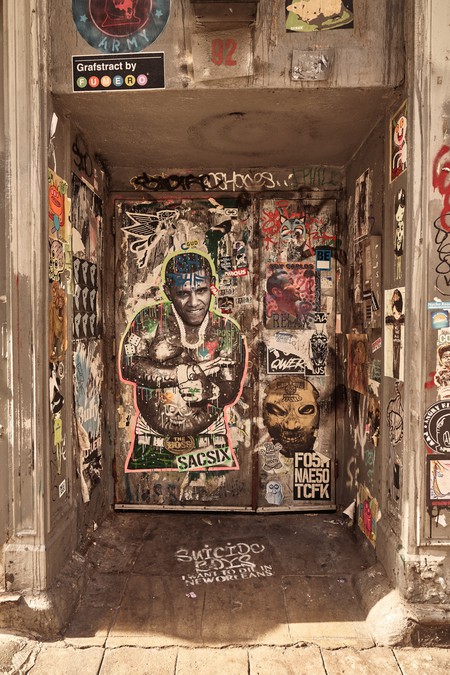 Lorimer has been photographing New York’s adorned walls under the alias Luna Park since 2005. She’s witnessed the scene and the city change dramatically over time, as mainstream interest and appreciation have exploded.

“I think films like Banksy’s Exit Through the Gift Shop were moments where people that maybe hadn’t been into street art before were suddenly sensitized to the fact that there’s all this stuff going on out here,” she explains. “And obviously with the rise of Instagram everybody is now a photographer. [Murals are] now essentially on the internet before the paint has even dried.”

This new era of social-media visibility has taken street art out of the shadows. A new generation of artists, adept at self-promotion, is making money from what was once a kind of outlaw art form. 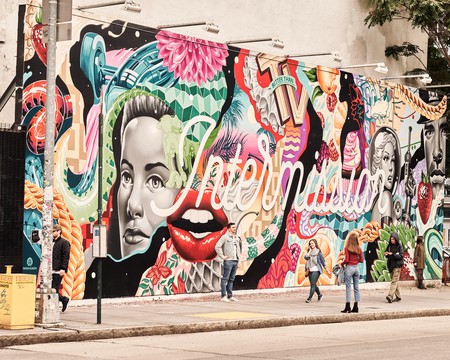 Graffiti-writing pioneer Eddie (who requested his last name be omitted) was raised in the South Bronx in the ’70s, an era when the neighborhood was breaking national records for all the wrong reasons. Crime was so severe that the NYPD gave its local station house the nickname Fort Apache – a last stronghold in an area besieged by violence, arson and drugs.

Amid the urban decay, tagging proliferated. Young people invented recognizable signatures that would identify them – perhaps as a member of a particular street gang or the resident of a specific neighborhood, but most importantly as an individual.

“It was a form of attention-getting, marking territory and ownership of a place in New York for yourself,” explains Eddie, whose tag Staff 161 can be spotted all over the city. “In order to compensate for not having a voice, the young people would write their names and their statements … If you’re in a society that doesn’t really recognize your existence, then you’re going to try and make them recognize ‘I’m here and I count and I exist.’” 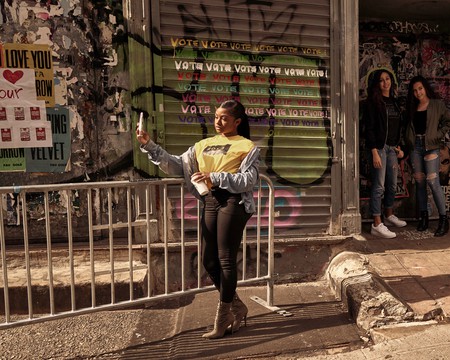 At the inception of graffiti, artistry was not the motive; tagging was simply about getting your identity in front of as many eyes as possible. But to get the mass recognition they desired, writers with artistic flair began making stylistic amendments to their signatures. Tags evolved with bubble lettering and swirling calligraphic flourishes. Some incorporated characters that became increasingly intricate – the sort of work that required additional time and increased the likelihood of getting caught by police.

While New York officials were clamping down on defacement and vandalism, the most prolific and gifted of the artists were starting to cross over into the mainstream. By the 1980s galleries were courting Jean-Michel Basquiat, Richard Hambleton and Keith Haring (who, in ’82, was the first to paint the Bowery Wall – a world-famous SoHo street-art site now owned and curated by Goldman Properties). 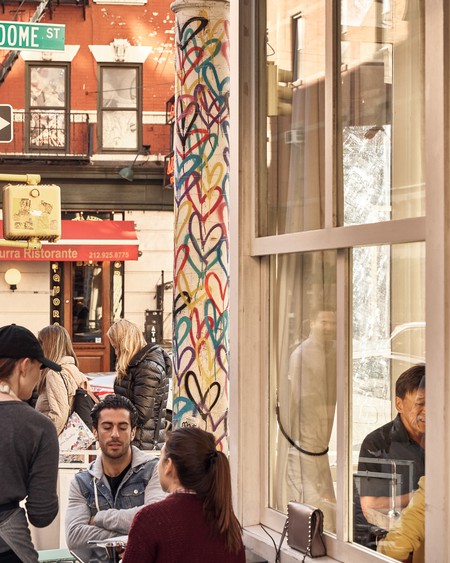 The rebellious, grass-roots nature of street art gives it a kind of purity, not to mention an accessibility in an industry that’s often perceived as cliquey and pretentious. It’s art for the people, by the people. At a time when brands are increasingly keen to be viewed as authentic, that quality has currency.

Lorimer notes an increasing number of businesses are commissioning murals from street artists, including fashion retailer Rag & Bone in SoHo, which she believes was one of the first stores in the area to have a curated wall. 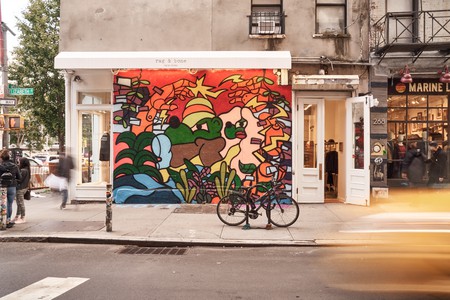 “I think advertisers and business owners sat up when they realized, ‘Hey, here’s a target demographic and an art movement that can be manipulated for commercial purposes,’” she says. “If you put something there for people to look at, they will come and maybe incidentally will shop as well.”

These ephemeral pieces are painted anew every few months, enticing people back with the promise of fresh Instagram content. Each post provides free social-media exposure for the brand and in turn attracts more customers to its physical location.

One company is taking our obsession with painted walls a step further. Colossal Media, which is headquartered in East Williamsburg, Brooklyn, was launched in 2004 by a graffiti artist named Paul Lindahl and his friends Adrian Moeller and Patrick Elasik – owners of Mass Appeal, a graffiti and urban-culture media company. Their goal was to revive the techniques of traditional sign painting and use them to create giant muralized advertisements by hand. Consumers would be substantially more interested, they surmised, if the ads were genuine artworks. 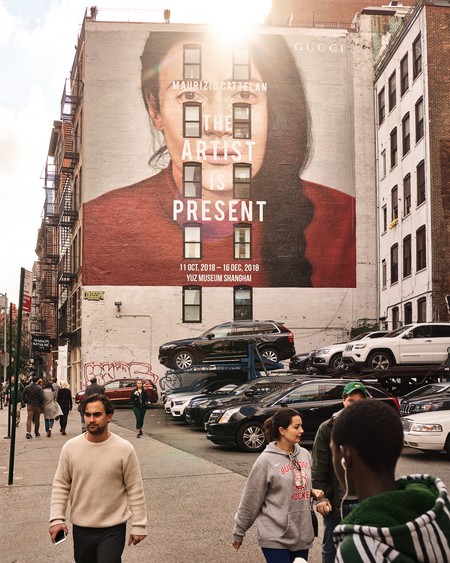 Although the Colossal approach is distinct from street art (its techniques are essentially a slightly more modern version of those used to paint the Sistine Chapel) it initially appealed to edgier businesses like liquor brands and video-game companies. Over time, though, the value of hand-painted ads became clear – not just the finished result (a perfectly executed version of whatever design the client provided) but the theater of painting it in public. Of erecting scaffolding and slowly, painstakingly bringing the image to life, often in front of an audience holding smartphones. It’s a long way from the under-cover-of-darkness tactics New York’s graffiti pioneers employed.

“We are painting with oil paints at street levels where people can see it right next to street art, right next to the graffiti,” says Liam McWilliams, one of Colossal’s Expert Painters, who studied communication design at Pratt Institute. “It’s obvious that some of the advertisers who choose Colossal to paint their images do it because there is that connection. I would never deny that they are related, but they are two separate parts of the same culture, at the same point in time.” 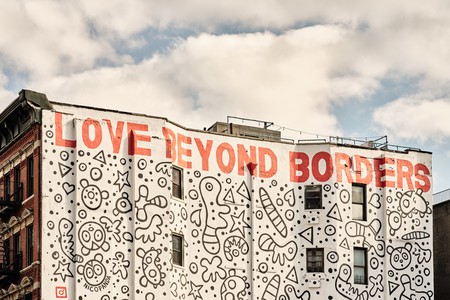 Colossal now leases 19 walls in the SoHo, Lower East Side and Nolita areas. Many of them are contracted to high-end fashion brands from Chanel to Gucci and Dior.

Protective of a community she’s now embedded in, Lorimer is wary that “muralism has the potential to be co-opted, whereas street art, at least if I’m looking at it idealistically, is an individual message.” She would never knock an artist for trying to make money out of their talent, though. Especially in one of the most expensive cities in the world.

Similarly Eddie, who now leads SoHo street-art tours, doesn’t see the harm in getting paid to paint for brands, especially if artists are doing it ethically. Which is to say, they’re acknowledging the generations of graffiti writers and street artists who paved the way for their success.

“The whole thing is freedom of expression,” says Eddie. “If the person has can control (the ability to skillfully wield a spray-paint can), which is the talent of a graffiti artist, well that’s just a testament that the first-generation writers really had something going with their spray painting.”

If you love street art, be sure to check out our guide to the best places to find street art in New York.