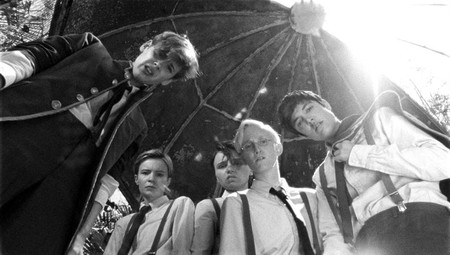 Boys love boys and turn into girls in Bertrand Mandico’s gorgeous The Wild Boys, screening at FIAF CinéSalon’s “Burning Bright” series in Manhattan on July 31. Get tickets while they last.

What is the perfect state of grace? Is it conferred by life’s experience, or does someone attain it early on by virtue of he or she being young and beautiful? And does gender have anything to do with it? Toward the end of The Wild Boys, a wondrous new French film written and directed by Bertrand Mandico, two newly fledged, short-haired young women, naked but for their unbuttoned shirts, forage for sea plants off the coast of a remote island that changes males into females. “They were superb,” the narrator (Lola Créton) reflects during this fleeting underwater idyll. 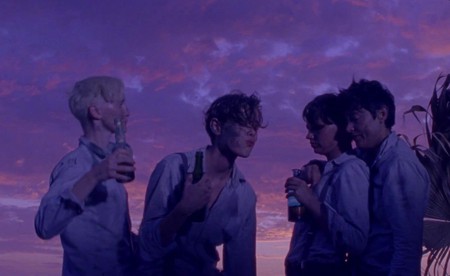 As well as the beautiful swimmers, there are three more of these nymphs, but one of them is mono-breasted. Tanguy (Anäel Snoek), the least daring of the five shipwrecks, has eaten the same furry fruit and quaffed the same milky fluid that spurts from the island’s phallic tree shoots as have his companions, but s/he alone hasn’t grown a bust. Uncomfortable with the in-between state, he just isn’t man enough to become a woman.

None of the five was “superb” at the start of this phantasmagorical fable, set circa 1900, because they were all teenage schoolboys found guilty of raping their teacher (Natacha Régnier). Snoek and each of her fellow actresses, Pauline Lorillard, Vimala Pons, Diane Rouxel, and Mathilde Warnier, makes a convincing male. They could have stepped out of The Lord of the Flies. 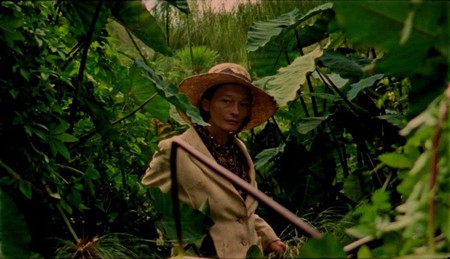 As politically incorrect in places as it is ardently feminist in others, The Wild Boys is an arcane piece of exotica shot in the antique style of the Winnipeg auteur Guy Maddin; it has the washed-out look of silent movies but lacks the distressed quality Maddin gives his films. As well as Maddin, Mandico is stylistically and narratively influenced by the directors Josef von Sternberg (Anatahan), Walerian Borowczyk (Goto, Island of Love), and Raúl Ruiz (Treasure Island).

Following the rape at the start of the movie, the boys are judged in a court of law and sentenced to be transported overseas by the martinet Captain (Sam Louwyck), who chains and rigs them up to his ships’ furry sails. This old salt is the film’s ultra-masculine “other,” and with his large tattooed penis he becomes an object of homoerotic desire for the gentlest of the boys, Hubert (Rouxel). 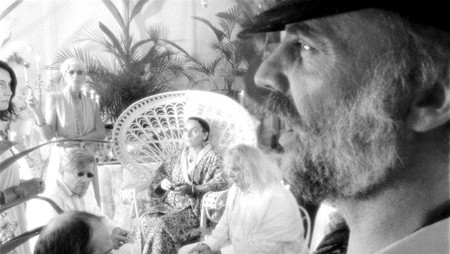 The martinet: Sam Louwyck as the Captain in "The Wild Boys" | © Ecce Films

After they arrive at the island, the Captain pulls the boys around the island by a rope, recalling the way Long John Silver, the sexualized father figure of Stevenson’s Treasure Island, pulls young Jim Hawkins. Only is it later revealed in The Wild Boys that the Captain has, like Tanguy, grown a single breast, his previous sojourn on the island having proven ineffective (or his machismo too resistant to the estrogen in the plants). If the film is a kind of allegory, the Captain and Tanguy embody the male fear of embracing the feminine side of their psyches: the yin to their yang.

The Captain’s eventual fate doesn’t augur well for Tilda Swinton-lookalike Tanguy. Femaleness is human destiny, or at least it is for most denizens of the uncharted island. The resident Prospero figure, Dr. Séverine (Mandico’s muse Elina Löwensohn), a onetime man and hormonal scientist, has endorsed its capacity for transforming men into women. “He believed a feminized world would stop war and conflict,” the narrator says. 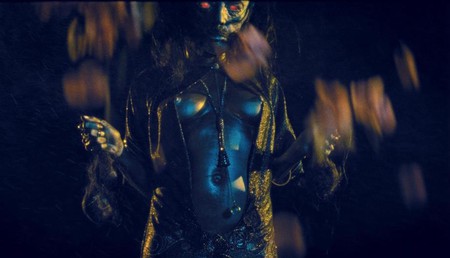 The red-eyed succubus in "The Wild Boys" | © Ecce Films

Photographed by Pascale Granel in black and white, with abrupt cuts to brief scenes etched in luridly bright colors, The Wild Boys’ has an aura of 1930s studio-made artificiality, which is deceptive because it was partly shot on location on Réunion in the Indian Ocean. The mood of hermetic unreality is enhanced by dashes of Ruiz-like surrealism—a disembodied bejeweled skull and a red-eyed succubus appear at odd intervals and the boys’ collective and uncontainable sexual urge is known as “TREVOR.”

Mandico seems to strive for synesthesia at times: there’s an eerie, strikingly anachronistic synth and organ score by Thibault Deboaisne and Hekla Magnúsdóttir, while the smell of oysters, we’re told, hangs over the entire island.

Playful—if not as half as larky as Maddin’s films—but also perverse and densely imagistic, The Wild Boys verges on the Baudelairean. Epitomizing art for art’s sake, it’s a movie in line of descent from the 19th-century Decadents and the Aesthetic movement, as well as such fabulously queer pictorial silent films as Salome (1923) and The Magician (1926). The island even has lilac skies!

Yet civilization calls out to the five. No sooner have all of the boys save Tanguy turned into girls and luxuriated in their femininity than they ungratefully want away from this “rotten” paradise where, as males, they had so much pleasure copulating with plants that wrapped their long leaves around their thighs during sex.

How serious is the film’s feminist agenda? Dr. Séverine’s sentiments about women being more humane than men seem sincere while the climax, which involves the irrevocable detaching of the boys’ members, is genuinely stirring.

At the same time, The Wild Boys is as much a celebration of the female form, in keeping with male-dominated art and film history, as it is a championing of women’s ethics. Mercifully, the girls’ short hair preserves an illusion of androgyny. Their mix of male and female characteristics endows them with a visual gender fluidity—which perhaps nears a state of grace.