For Francis Picabia, Shape-Shifting Was the Purest Art 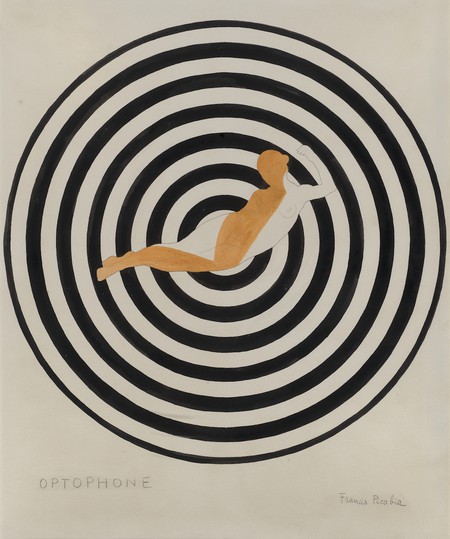 Somewhere at the crossroads of cubism’s energy, Dada’s irreverence and the timeless eloquence of portraiture existed Francis Picabia: defiant, intrepid, and absolutely brilliant. Picabia had one of the most simultaneously dynamic and consistently pleasing oeuvres of the 20th century; yet compared to his contemporaries—Picasso, Duchamp, Matisse—he lurked in the shadows of modernism until well after his death. As MoMA’s landmark retrospective comes to a close, it leaves us to ruminate on the nature of Picabia’s “unruly genius.”

Refusing adherence to any singular aesthetic over the course of his prolific 40-year career, unbridled artistic freedom is the only constant thread that runs through all 200-plus artworks in MoMA’s survey of Picabia’s work, Our Heads Are Round so Our Thoughts Can Change Direction. The name of the multimedia exhibition is a fitting “Picabian” proverb, which MoMA considers to “aptly [encapsulate] the nonlinear, circular character of his artistic practice.” 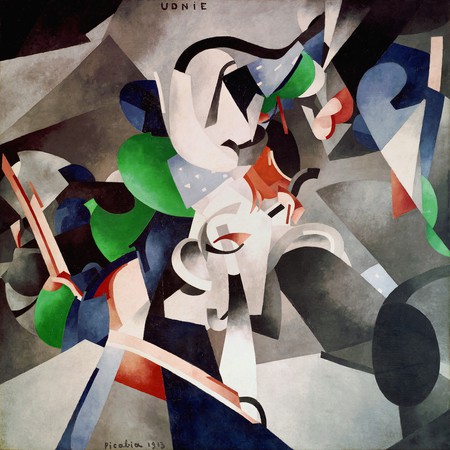 After an initial foray into what MoMA calls “after-the-fact” Impressionism during the early years of the 20th century, Picabia (1879–1953) intently avoided commitment to any style, philosophy, medium or technique as part of an unapologetically unorthodox approach to his own oeuvre. He would experiment with cubism, surrealism, Dada, and Symbolism, but remained undefinable by any familiar characteristic other than his ambiguity. The makeup of Our Heads Are Round so Our Thoughts Can Change Direction well-exemplifies the artist’s constant state of metamorphosis, showcasing 125 diverse paintings, 45 works on paper, a film, and sound-bites of his writing excerpts. 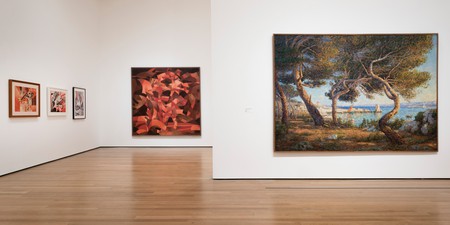 Picabia’s artistic career was rife with contradictory reviews. Much of his work was critically mocked at the time of its unveiling, while he was simultaneously regarded as “a ‘high priest’ of modern art” amongst progressive abstractionists early on. Just as he was gaining notoriety for his works of cubism, World War I hit Europe and the French artist sought refuge in Dada hot spots New York and Zurich. From 1915 until the early 1920s, the avant-gardist experimented with Dada art forms—a particularly appropriate school of thought for Picabia, as Dada, too, was intrinsically impossible to define. 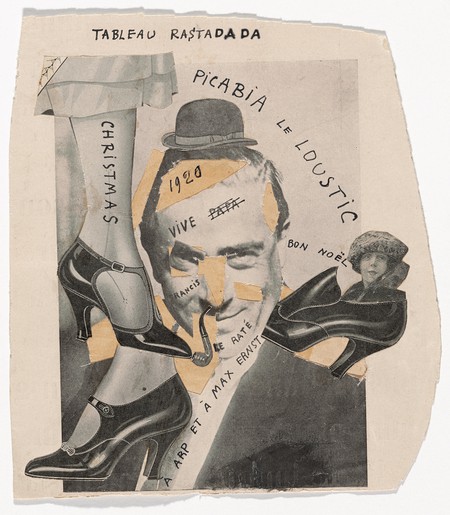 While Picabia would depart from the Dadaists by the mid-1920s in temporary favor of the tableau vivant (“living picture”), Dada’s branches of art, film, theater and literature—not to mention its vehement disdain for mainstream culture—kept Picabia busy throughout the first half of the decade. He created a number of inspired collages and drawings, and in December 1924, his film titled Entr’acte (on view at MoMA) premiered alongside Erik Satie’s ballet, Relâche. 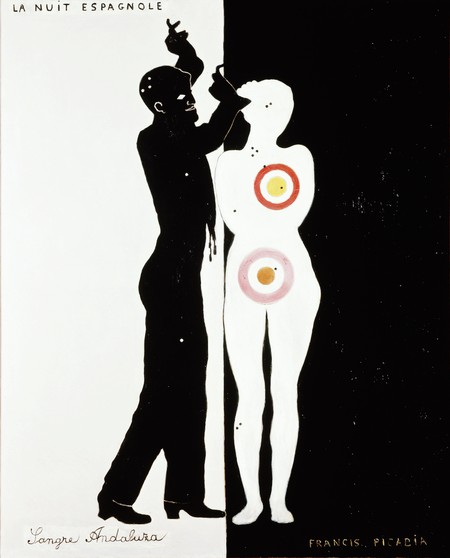 In 1925, Picabia moved to the south of France. There, the artist (born to two wealthy parents in Paris) indulged in his “longtime passions for yachting, fast cars, and casino gambling,” MoMA informs. During this time, Picabia produced a number of revealing portraits depicting colorful, carnivalesque characters embracing, kissing, and in some instances, staring defiantly at the viewer as if to knowingly cause discomfort. In retrospect, Picabia’s Monsters are particularly enlightening; dark and mischievous, the series is a nod to the self-proclaimed “terrible monster” in him, and the promiscuous lifestyle he was known to lead. 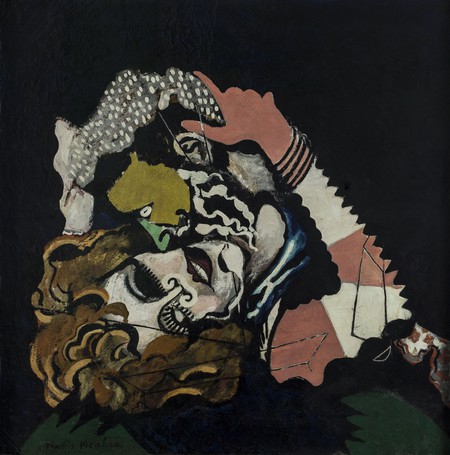 Characterized by contrasting colors and rich textures, Picabia’s Monsters would become clear inspiration for experimental artists in decades to come. One such artist was Polish-born German painter and photographer Sigmar Polke (1941-2010), whose rise to prominence in the 1960s would “[throw] a spotlight on Picabia as an unexpected precursor,” The Nation’s Barry Schwabsky points out. 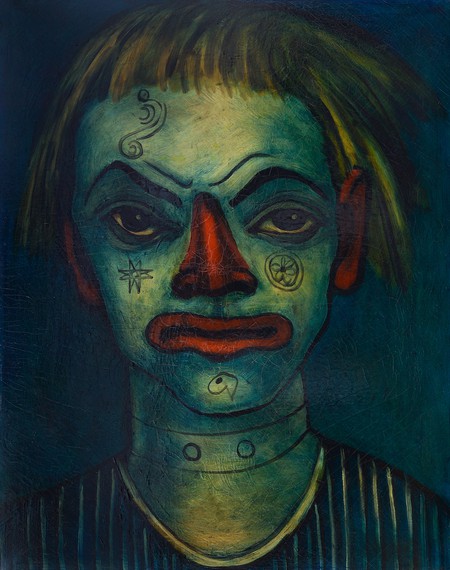 But it wasn’t long before Picabia abandoned his Monsters to shift his gaze towards new subjects, and for the next two decades, he was all over the map. First came Transparencies; from 1927 until 1930, Picabia created smooth, layered paintings with a natural, dreamy spirit. Then, from 1934 until 1938, he painted representations of “the troubling malaise and sense of creeping doom that was spreading throughout Europe, as the threat of fascism and totalitarian ideologies took center stage,” MoMA notes, evident in bizarre works such as Le Clown Fratellini (1937-8) (above) that evoke a quiet but present threat. From 1940 through 1943, Picabia turned to photo-based paintings. Playing with light, they’re widely received as his most unnerving pieces. 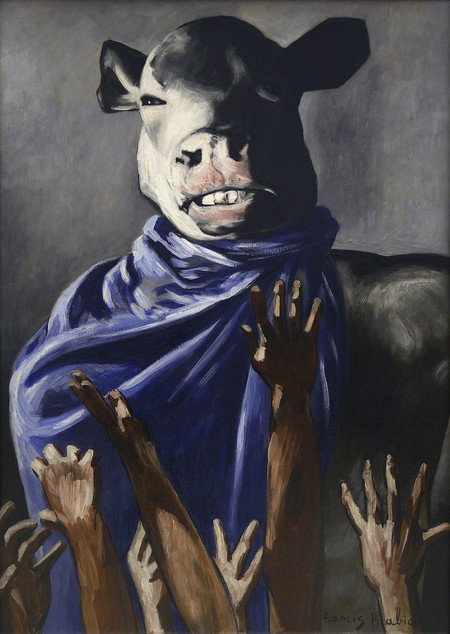 “Throughout World War II … [Picabia] painted works that combine kitsch subjects, popular culture, and politics in an unsettling mix,” reads the exhibition press release. Inspired by photographs found in soft-core pornographic magazines from the 1930s, this series maintains the aesthetic of “artificial studio lighting, soft focus, and optical distortions.” The portrayal of seemingly idealistic figures gave rise to suspicion revolving around Picabia’s political leanings, with MoMA weighing in: “His much-debated wartime paintings remain open to interpretation, bearing witness to the moral ambiguities of this dark historical moment, and to the intricacies of an individual’s response to seismic political change.”

By 1945, Picabia came full circle to a new brand of abstractionism. Canvases covered in thick layers of paint portray symbols clearly linked to minimalism, which rose in popularity after World War II. The final gallery of Our Heads Are Round so Our Thoughts Can Change Direction displays almost celestial canvases with dots and ghostly shapes.

MoMA’s holistic survey of this larger-than-life figure is remarkable in that it urges the rare consideration of an artist’s right not to choose. In fact, it was Picabia’s dalliance with the modernist spectrum that revived his ubiquitous relevance in full force later on. Still, there’s something peculiar about journeying through a solo show of so many extraordinary artists in one.

Our Heads Are Round so Our Thoughts Can Change Direction will remain on view at MoMA until March 19, 2017.