Otherworldly Experiences Inside A Flotation Tank 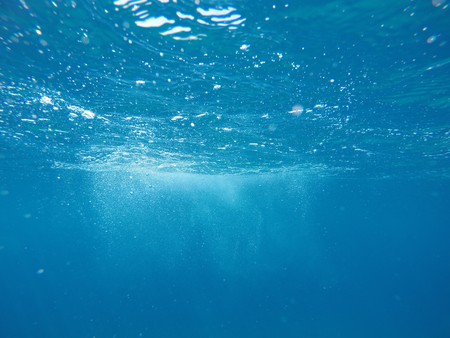 I’ve been dealing with insomnia on and off my entire life. Normally it burdens me in the early hours of the morning. I wake up needing the bathroom and thoughts stampede into my mind like shoppers at a Black Friday sale.

During the weeks when insomnia hits I struggle to summon the momentum for exercise. I flake on social plans and rely on multiple coffees and sugary snacks to keep me buoyed up throughout the day. If you’ve ever suffered from sleeplessness I’m sure you can relate. Not getting enough shut-eye gets you down, affecting multiple aspects of your mental and physical health.

Ever in search of a remedy that doesn’t involve prescribed sedatives, I heard about Lift/Next Level Floats in Carroll Gardens, Brooklyn. I’ve always been wary of sensory deprivation tanks. Encasing yourself in a dark, watery pod sounds claustrophobic, but this particular float lab is bright, serene and generally spa-like. Lift offers two options for floaters: the clam-shell shaped Evolution Pod and the Ocean Float Room, which is apparently ideal for first timers like myself.

The receptionist shows me into my private suite — a wet room with towels and hooks to keep belongings off the floor. I’m instructed to shower first, shampooing my hair but not conditioning until after the session. There are ear plugs on the side which should be inserted before entering my adjoining Ocean Float Room — a small chamber with a big bath of water you step straight into. 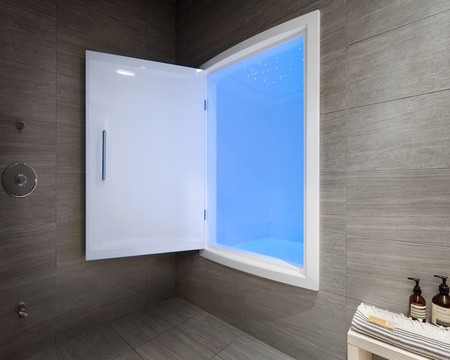 At the door end are a neck float and two buttons to control the lighting — a glow from beneath the pool base and a ceiling of LED stars which rotate through a spectrum of shades. I get into the water, which is set to exactly body temperature and contains 1000 lbs of Epsom salt (said to be great for all kinds of ailments), allowing me to float effortlessly. So effortlessly that after lying back and settling in I can hardly tell where my skin ends and the liquid begins.

I reach up and turn both sets of lights off. The room goes that can’t-see-your-hand-in-front-of-your-face black which feels a little alarming, I’ve so rarely experienced it. I take a deep breath and tell myself to unclench. After all, I came here for the full sensory deprivation experience, which I hear is where the real magic happens.

The benefits of floating (also known as R.E.S.T. or Restricted Environmental Stimulation Therapy) are numerous and impressive. One 2012 study concluded that “stress, depression, anxiety, and pain were significantly decreased, while optimism and sleep quality significantly increased.” There was also a correlation between “mindfulness in daily life and the degree of altered states of consciousness during relaxation in the flotation tank.” In other words, the meditative state induced by shutting off sensory bombardment has major cognitive perks.

Joe Rogan is a vocal champion of flotation therapy for this very reason. The comedian / broadcaster has a custom made flotation tank at his Los Angeles home, and calls it “the most important tool I’ve ever experienced for developing my mind…Everybody should do the tank. You will learn more about yourself [using it] than any other way.”

It should be noted that Rogan likes to dabble with psychoactive drugs during his floats, primarily marijuana, but he also stresses that, “you can have very introspective psychedelic experiences naturally in the tank. Everybody should be doing it!” First and foremost I was visiting for my insomnia, but I can’t say the idea of accessing deeper layers of consciousness in a weightless, dream-like state didn’t also sound intriguing.

It takes me a while to relax and trust the buoyancy of the water, but once I do I begin to slip in and out of dreams. Sometimes I flinch back to wakefulness with a thought of “where the hell am I?” before remembering, astonishingly, that I’m in a flotation tank, in a private suite, in a spa, in Carroll Gardens, in Brooklyn, in New York City, in America, on planet earth, adrift in the infinite universe.

In my half-lucid state I imagine myself floating through space, where there is no time and no sense of up or down, or left and right. In fact, there is no sense of my physical body at all anymore. I am completely weightless. No aches. No pains. No itch or knot or sensation of pressure on my skin is perceptible. Rogan describes it as a kind of vanishing.

Moment by moment you disappear, and it’s completely, unexpectedly glorious. 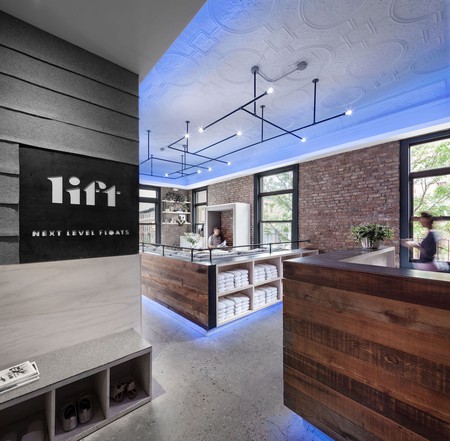 I have no idea how much time has passed. Could be 15 minutes, could be hours, but then music starts to play softly under the water, signaling the end of my 60-minute session. I will myself to exit the Ocean Float Room and flick the shower on, sticking my head under the cascade.

Lift has a loungy decompression area with herbal teas, coffee table books, and a set of kaleidoscopes. That’s where I gratefully land after using the “primping room” to lotion-up and dry my hair. It’s a welcomed buffer before regular life, with all its distractions, resumes.

Joe Rogan likens the flotation experience to an onion. The first visit only peels back the top layer, but the more you float the deeper you go and the greater the revelations become.

All this is to say, I think I might be hooked now.