Five Potential Shocks at the Oscars

The Academy Awards voters have a habit of picking surprise winners. What curveballs will they throw us on Sunday? Here’s a look at some possible upsets.

Most pundits say Germany’s Toni Erdmann—widely considered 2016’s best European film—will win the Oscar, but politics could play a part here. After President Trump announced the travel ban, Iranian director Asghar Farhadi ruled out traveling to America to support his Oscar-nominated The Salesman at the Academy Awards. Given that some Academy members will denounce the new administration’s policies during the ceremony, The Salesman would prove an enormously popular winner. Australia’s Tanna, Denmark’s Land of Mine, and Sweden’s A Man Called Ove remain long shots.

Taraneh Alidoosti and Shahab Hosseini in The Salesman | © Memento Films

Manchester by the Sea nominee Casey Affleck was considered a dead cert to win the Best Actor Oscar until Fences’ Denzel Washington won the Screen Actors Guild Award on January 29. Since 18 of the past 22 SAG winners in this category also took home the Oscar, Affleck’s camp will be nervous. Washington has won four other acting awards this season—two apiece from African-American and critics’ groups—compared with Affleck’s 44 wins, so the odds still favor the latter. Just don’t stake the house on it, or on a win for Ryan Gosling (La La Land), Andrew Garfield (Hacksaw Ridge), or Viggo Mortensen (Captain Fantastic).

Emma Stone (La La Land) andIsabelle Huppert (Elle) each won a Golden Globe, so the competition for the Best Actress Oscar is too close to call. SAG winner Stone is the favorite, and potentially has L.A.’s Academy voters behind her. Yet she has won nine awards compared with Huppert’s 22, and some of these the French actress won for her performances in Things to Come as well as Elle. While Stone is currently something of a national sweetheart, Huppert is an acting legend whose Oscar is long overdue. But what if they canceled each other out? Natalie Portman (Jackie) may still be in with a shout. Ruth Negga (Loving) and the little-known Meryl Streep (Florence Foster Jenkins) are outsiders.

With 43 awards to date, Mahershala Ali (Moonlight) is the man to beat here. Yet Ali surprisingly missed out on the Golden Globe, awarded to Nocturnal Animals‘ Aaron Taylor-Johnson, as well as the BAFTA, awarded to Lion‘s Dev Patel. Michael Shannon, another Nocturnal Animals actor, got an Oscar nod, whereas Taylor didn’t, and Jeff Bridges (Hell or High Water) is also in the frame. Shannon and Bridges both excel as West Texas lawmen, but the Academy may not be in the mood for good old boys this year. Patel might challenge Ali, but it would be a shock if the stereotype-busting African-American actor didn’t add to his haul.

Though Moonlight won the Best Original Screenplay at the Writers Guild Awards, it’s competing for the Best Adapted Screenplay Oscar along with Arrival (which won in the Writers Guild’s equivalent category), and BAFTA-winner Lion, along with Fences and Hidden Figures. A popular film that’s missed out on awards love, Arrival might have a chance of snaring the Oscar, but Moonlight, written by the film’s director Barry Jenkins, remains in pole position. The Academy will want to honor Jenkins, and since La La Land (winner of the only Globe for screenwriting) and Damien Chazelle seem to have Best Picture and Best Director locked up, the screenplay prize is Jenkins’ best bet. 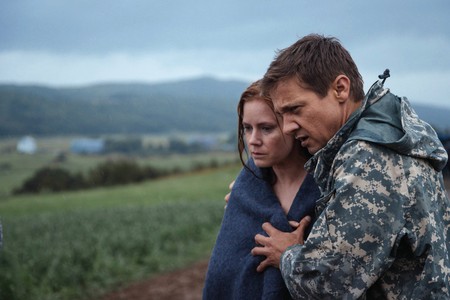