Finding Self-Love and Empowerment in a Mystical Oracle Deck 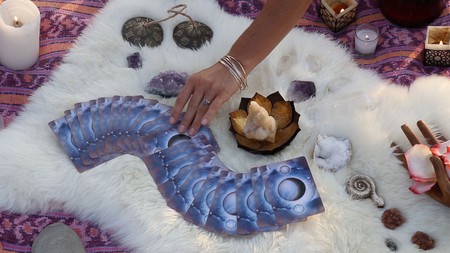 I first met Ashley Bruni at the Rubin Museum on West 17th Street in Manhattan one evening in February. She was doing an intuitive reading from an oracle deck she helped design with two other women. When I sat down for my reading, one of the cards “jumped” out and fell to the floor.

“That’s your card,” Ashley said with a smile. “Sometimes you gotta be a little playful with these things.”

My rebellious little card depicted a large compass with flowers around the edges, and a mantra written at the bottom that meant I was to follow my inner voice. The deck wasn’t about prophecy or conjuring up definitive ideas about the future, but about tapping into something I already had: intuition.

A few weeks later, Ashley and I sat together at the Crosby Street Hotel, sipping herbal tea and chatting about all things wild and witchy.

“We are the Gods. We’re all God. The idea of separateness is what keeps us from that divinity,” Ashley says. A tranquil, down-to-earth Californian with a no-nonsense vibe, Ashley explained that she also teaches meditative dance, works as a marketing consultant, and grew up with “Earthy” parents who didn’t insist on imparting any strict religious dogmas to her. 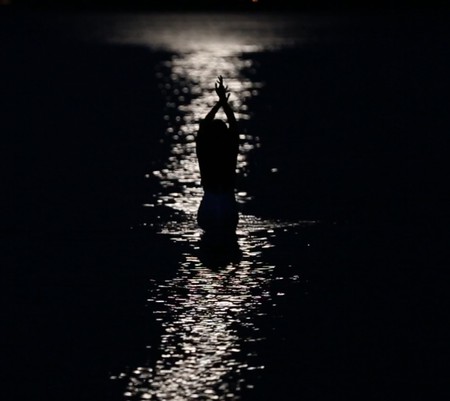 “I’m a free spirit and an Earth mama, and I take the time to prioritize the skills that it takes to alchemize with the Earth. But I don’t necessarily know what to call that.”

Beyond language and labels, Ashley’s practices—ritual baths, calling upon the four directions of the Earth, engaging with moon magic, and “holding space” with a group of women in order to change energy—came full circle when she helped create The Moon Deck. Along with author and co-creator Aarona Pichinson and illustrator Andi Keh, the three women designed 44 eco-printed cards and a guidebook as an interactive tool for self-discovery, self-love, and ritual work.

The illustrations alone took nearly two years to create. Keh used coffee-stained watercolor paper to “give the art a warm vintage vibe, and sketched hundreds of drawings before getting them just right on the paper.” To add color and texture, silk paintings were created separately and then Photoshopped in combinations with the drawings. The result is an abstract, watercolor effect within each card. 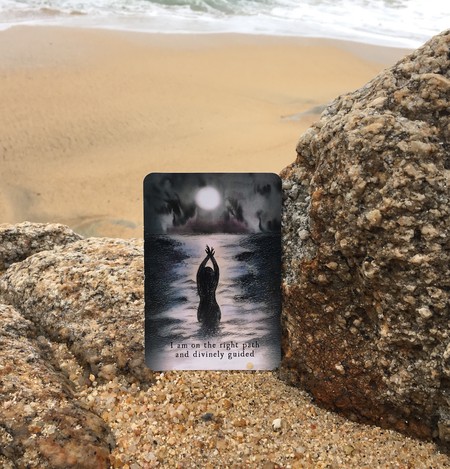 The deck includes 44 mantras for empowerment, transformation, and creativity, rather than divination, and also a small guidebook with accompanying rituals for each card. “The book is composed of personal rituals from myself, from Aarona (the main author), and Andi,” Ashley says. “It’s laid out so that someone can read it and take what they want, and leave behind anything that doesn’t resonate with them.

“The Moon Deck is used as a tool. It’s like teaching people to fish. Mantras are very helpful, but if they don’t resonate, choose another card. If that doesn’t work, put the deck away and write your own mantras,” she continues.

Part of creating the deck meant distilling personal rituals and spiritual tradition into an accessible tool that would appeal to the most people—taking deep-rooted esoteric knowledge and presenting it to the everywoman. Good design—illustration in this case—helps ground the spiritual knowledge with beautiful iconography. 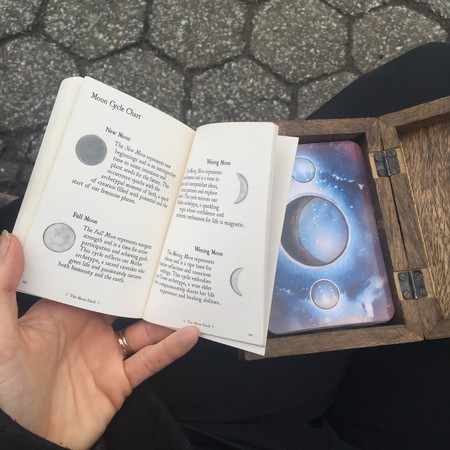 But it’s not a tarot deck. Although co-creator Aarona has been working with tarot for the last 20 years, The Moon Deck was more about helping others ritualize a “path of self-love while offering a roadmap for personal discovery.” Her work as a yoga teacher and personal development guide, coupled with the “visual and experiential messages of card decks,” offered a shift in her perspective: she’d create a deck of her own, with “rituals and teachings that supported her through the rise and fall of life,” she tells me.

After discussing her plan with Andi, the pair brought Ashley on to “bring the vision to the next level,” and the rest was history. “It started from a place of sisterhood and a shared love of the moon,” Aarona says. At first, they didn’t realize how much of an undertaking the project would actually be.

After launching it on Indiegogo, Ashley says she “had a vision” of having the cards in a wooden box. “I wanted something that people could have in their homes, on their altar space. A lot of women are disconnected from this idea of creating an altar. 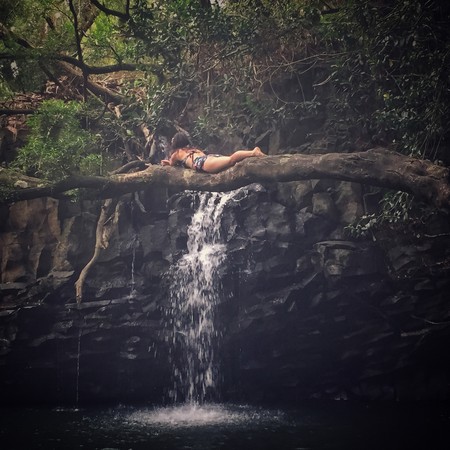 “But you can start really small by practicing your power of energy shaping within a small container. If you can create space in the corner of your bedroom or your bathroom, if you can have a box where you use your own editing and discernment, and you see what you’ve created with your own vision—it’s a small, easily accessible way to start using your power,” she tells me back at the Crosby Street Hotel. In this sense, the container itself becomes a sacred object.

“The deck allows you to listen to the oracle of your own intuition. An oracle is someone who is all-seeing, all-knowing. But the idea that that is someone other than yourself [is a misnomer]. Eventually you have to look to yourself for answers—attuning yourself to that very subtle magnetism and wisdom in your body.”

The oracle deck is not a separate oracle, but a quiet reminder of the voice from within. 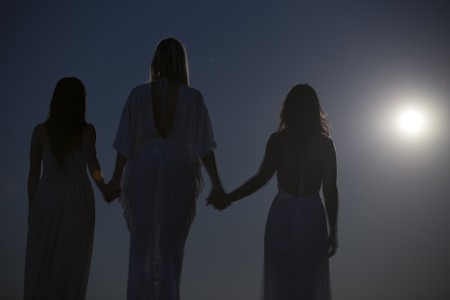 The creators the Moon Deck, Aarona, Andi, and Ashley, under the full moon at night | © Moon Deck/ Ashley Bruni
Give us feedback