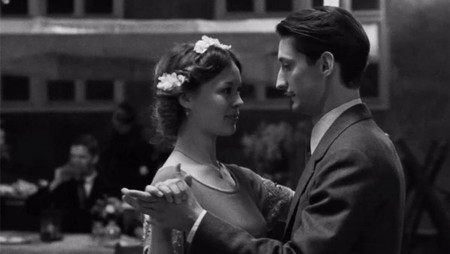 François Ozon’s Frantz is a post-war drama of international healing framed as the tentative love story of two young people whose countries were lately at war. It’s one of the most beguilingly beautiful and heart-tugging films of the year so far.

Frantz depicts the emotional journey of Anna (Paula Beer), a German woman who becomes attracted to a fey Frenchman in 1919. At the outset, Anna is living in the town of Quedlinburg, near the Harz Mountains, with the parents (Ernst Stötzner, Marie Gruber), of her fiancé, Frantz, who had been killed in the Marne trenches the year before.

The three are locked in grief, but find solace in a stranger, Adrien (Pierre Neney), whom Anna spies mourning Frantz at his graveside. Despite anti-French sentiment in the town, the family warms to Adrien when he tells them of his pre-war friendship with Frantz, a fellow music student, in Paris. Anna and Adrien’s delicate relationship takes an unexpected turn when Adrien makes a confession. A spoiler alert in the following Q&A interview with Ozon indicates where to pause when reading it if you haven’t already seen the film.

Filmed mostly in lustrous black and white, with occasional suffusions of color, Frantz consolidates the 49-year-old director’s reputation as one of French cinema’s most psychologically perceptive voices, especially in the realms of gender fluidity, dealing with grief, and understanding the stories people tell themselves (and others) and why. The maker of Water Drops on Burning Rocks, Under the Sand, Swimming Pool, Young & Beautiful, In the House, and The New Girlfriend is now at the peak at his powers. We talked recently when he brought Frantz to the Rendezvous With French Cinema festival in Manhattan.

Culture Trip: What attracted you to making a new version of Ernst Lubitsch’s Broken Lullaby [1932]?

François Ozon: Actually, I didn’t know it. A friend of mine who knew I wanted to make a film about our need for secrets and lies said I should read the French play by Maurice Rostand that the Lubitsch film was adapted from. And I read the play and I really loved the plot about a young French guy who traveled to Germany to put some flowers on the grave of a German soldier and who asked forgiveness from his family. I decided to adapt it, but I was devastated—really depressed—when I learned Lubitsch had already done that. I said, “How can I make the same film Lubitsch made?”

I watched his film and really enjoyed it. But I realized I had a different way of telling this story. The Lubitsch film and the play are told from the point of view of the French soldier, so you know what he did from the beginning, but my idea was to tell it from the German point of view—from the side that lost the war—and from Anna’s perspective especially. With my version, the audience is like Anna. We don’t know why this French guy, Adrien, has come to Germany and we discover it step by step. It was a way to create suspense.

Also, I didn’t want just to remake the Lubitsch film, but to make a French answer to a German story. Broken Lullaby, which Lubitsch made in America, was a film about reconciliation between Germany and France from the point of view of a German, but it was made in the 1930s without the knowledge that World War would arrive. I knew that my film, because of that, would be totally different. 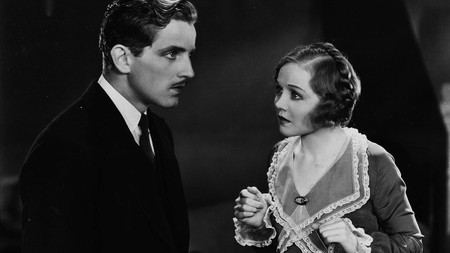 CT: A sad irony is that Phillips Holmes, the handsome young man in Broken Lullaby, was killed in a midair collision over Ontario when he was serving with the Royal Canadian Air Force in 1942.

FO: I know Lubitsch loved the film. It was very important for him as a German to have made it, and he was sad that audiences didn’t like it.

CT: As you depict Frantz from the German point of view, it’d make an excellent double bill with Lewis Milestone’s All Quiet On the Western Front [1930].

FO: Yes, I discovered that film during my research. It’s still very powerful. There are a lot of parallels between the two. Like Rostand, Erich Maria Remarque [author of the All Quiet on the Western Front novel] was a pacifist.

CT: You use color in the film to show vitality returning Anna and Adrien’s lives after the war—for example, when they walk up into the hills together. But you also use color in the flashback that shows Adrien’s platoon marching in the Marne in 1918, just before it’s attacked by the Germans. That struck me as a strange choice.

FO: [laughs] I didn’t want to be rational—that was my problem with the producer, who wanted everything to be clear and logical. I wanted something more sensitive. I used color, as you say, when vitality is coming back in this period of mourning, but also at moments where there are big emotions at the heart of the story, including emotions [prompted by] memories, even if they’re fake memories or lies. When I show Frantz and Adrien meeting face to face, it’s like love at first sight, so it was obvious I had to show the scene in color. 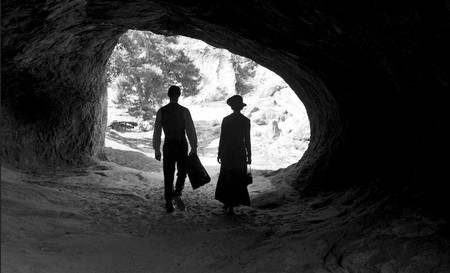 CT: Some of your most beautiful and moving shots in Frantz were influenced by the Rückenfigur [“back figure”] compositions in the work of the German Romantic artist David Caspar Friedrich. What do you think make Friedrich’s paintings of people standing or sitting with their back to the spectator so powerful?

FO: I don’t know. Maybe it’s easier to identify with a silhouette than a character. For the interiors, I also looked at the work of the Danish artist Vilhelm Hammershøi, who used shades of black, white, and grey for his painting of women viewed from behind. 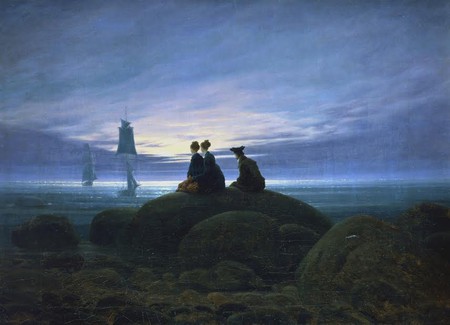 CT: When Anna asks Adrien about his knowing Frantz in Paris before the war, she says, “What was it about you two? Was it a woman?,” and Adrien says, “No, just a friendship,” she seems to restrain a smile. It’s almost as if she accepts that Frantz and Adrien could have been lovers. Did you intend that?

FO: Not exactly. It was important to show that Anna is a modern girl and could accept that her fiancé had an affair when he went to Paris. I wanted to kill the cliché of her being jealous of what he might have done in Paris. It wasn’t a problem for her because she was sure of her and Frantz’s love, though it may have been an illusion.

But I don’t think she has any idea of what homosexuality is. She’s more naïve and innocent about that. It’s exciting to her to imagine that maybe Frantz and Adrien shared the same girl like the guys in Truffaut’s Jules et Jim.

When Anne goes to Paris and discovers, for example, the hotel where Frantz stayed, it’s not exactly what she had imagined, and she is a bit disillusioned. Adrien realized when he stood in front of Anna and her parents that people do not want to know the truth. They wanted to hear a beautiful story about a friendship between a German soldier and a French soldier, so he gave them what they wanted—and what they needed actually. He created a fiction, a lie. 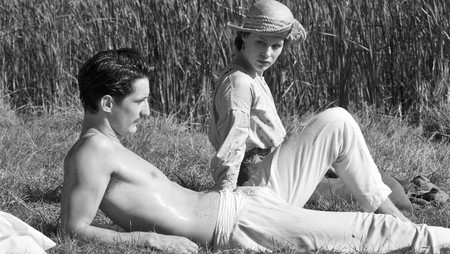 SPOILERS ALERT: The interview subsequently divulges developments in the story it’s best to discover by watching the film.

CT: Adrien’s lie tortures him, however, and only telling the truth to Anna sets him free. But the lie that Anna tells Frantz’s parents is a good lie because it protects them.

FO: Adrien’s lies help them, too, or at least comforts them for a moment, but it’s impossible for him to carry on with the situation so he confesses to Anna. I think the audience accepts Anna’s lie because, unlike Adrien, she’s not a murderer.

What I like about Adrien’s lie is that there is a truth under it. He tells something of himself, of his desire, of his sexuality, though I don’t think he understands his identity. I think by telling the story the way he does indicates that it’s a love story, that he would have had a love affair with Frantz even if hadn’t killed him.

CT: It’s an intriguing idea: falling in love with somebody and then killing them seconds later.

FO: It makes the story Adrien tells very necrophiliac. That’s what excited me about it. 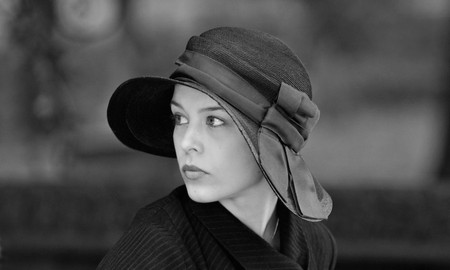 CT: Why did you want to tell the story from a woman’s perspective?

FO: Because Anna is more complex than Adrien and has a bigger journey than him. She evolves. She didn’t live the war in the flesh like Adrien, so she’s more able to go through all these different steps and to survive. Also, as a woman, she has to fight more. I wanted a happy ending, and I knew it would be easier with Anna than it would with Adrien. He doesn’t evolve because he has been destroyed by what he has done, and he isn’t able to overcome the terrible challenge he was given.

Anna understands after a while that Adrien is still a victim of the war. With the encouragement of Frantz’s mother, she fell in love with Adrien before knowing that he killed Frantz. Afterwards, she says to herself, “Maybe I have to forgive him and forget the past.” So she decides to go to him, but when she arrives in France she realizes that reality is more complex than what she imagined. She sees that Adrien is still obsessed with Frantz—the Frantz he has imagined—and that he will stay with his mother and marry this girl he doesn’t love. Anna understands what Freud called the reality principle, and so she is able to leave. 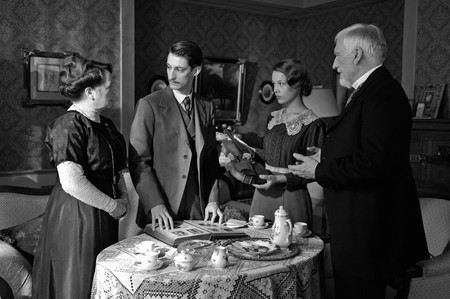 I did some Q&As with audiences, and a lot of girls were very sad and said, “Why can’t Adrien and Anna be together at the end?” I said, “It’s impossible for her because she is older than him in many ways. She has learned more, and he doesn’t want to grow up.” Maybe two years later he will realize that and change.

CT: You made me wonder about Adrien’s feelings for her when they kiss. 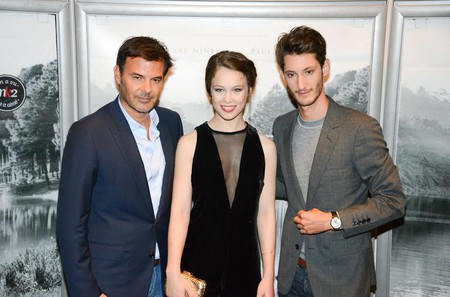 FO: Each time, she is shocked by it. The first time she goes to the Louvre, she sees it as a proof of a disaster, I think. The second time, when she sees it in Adrien’s house, she understands why he told the story about this painting. And at the end, does she see Adrien, does she see Frantz? I don’t know. It could be Frantz, because when we see him in the trenches he decides not to shoot Adrien, so maybe he commits suicide because he doesn’t want to kill a Frenchman, because he believes the French are his brothers.

But then Adrien’s decision to stay with his mother and to marry this girl he doesn’t love—that’s a kind of suicide, too.

For me using Manet’s painting was a way to show that Anna is about to get some distance on the story and to turn the page. She has understood that these guys were not for her. Neither of them was the Prince Charming she was dreaming of. And she is able to begin a new life.

Frantz is playing at Film Forum and Lincoln Plaza in New York City. 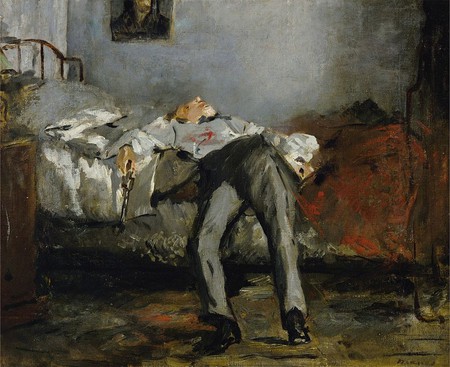