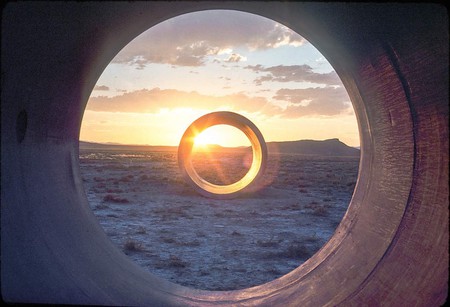 Four colossal site-specific tunnels by the American artist Nancy Holt (1938-2014) are harmoniously situated in Utah’s Great Basin Desert. Each hollow cylinder—measuring 18 feet in length and nine feet across—is positioned to perfectly encapsulate the rising and setting sun during the winter and summer solstices (which fall on June 21 and December 21 2018). Each tube also bears strategic perforations that correspond with stars in the Capricorn, Draco, Perseus, and Columba constellations. These openings allow controlled shadows and patterns of light to project across the structures’ interiors. 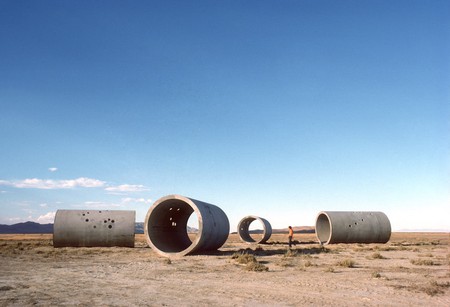 Holt’s was an exalted and contemplative practice, unfettered by the confines of traditional exhibition spaces. She manifested sublime philosophical concepts relating to space and time through large-scale, conceptually minded structures that pay homage to their awe-inspiring locations, and helped distinguish the sphere of environmentally conscious land art.

“[Sun Tunnels] centers Holt’s interest in perception and involves a focus on time—sculpting the sun’s light through the interplay of land and sky, and celestial shifts from day to night,” the Dia Art Foundation explains in a statement. In May 2018, Dia announced the addition of Sun Tunnels to their world-famous collection of modern and contemporary art—a noteworthy acquisition marking the foundation’s first work of land art created by a woman.

Holt made the first of her many pilgrimages to the American West in the late 1960s and cultivated deep ties to the arid lands before eventually relocating to New Mexico in 1995. She began work on Sun Tunnels, which would become her most famous project, in 1973. 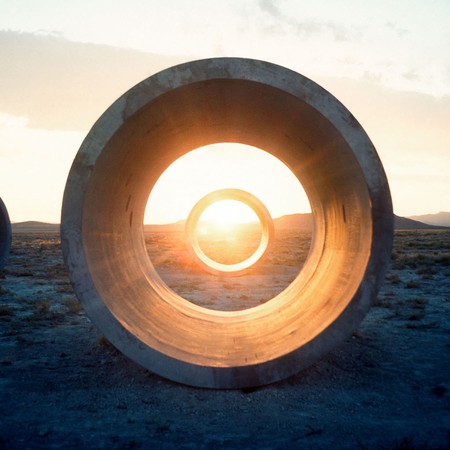 “The idea for Sun Tunnels became clear to me while I was in the desert watching the sun rising and setting, keeping the time of the Earth,” Holt said, as quoted in Dia’s press release. “Sun Tunnels can exist only in that particular place—the work evolved out of its site.”

In 1974, Holt purchased 40 acres of the Great Basin Desert—between the Rocky Mountains and the Sierra Nevada—where she would stage the tubes. There, she realized her most ambitious visual quartet, designed to frame controlled apertures of the vast desert and provide visitors with a new perspective of its panoramic expanse. On solstice days, the tunnels serve as new-age monuments to an astronomical phenomenon that humans have observed and worshipped since the dawn of time.

“Nancy Holt was an important innovator and intellect,” said the Dia Art Foundation’s director, Jessica Morgan, in a statement. “She deeply understood Dia’s commitment to stewarding such radical works. Dia enjoyed a long and productive relationship with her, which began in 1999 when she facilitated the donation of Robert Smithson’s Spiral Jetty (1970) to Dia.” 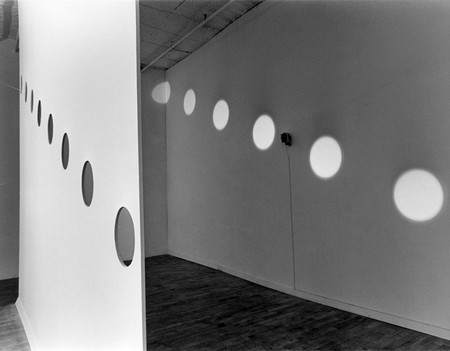 To honor Dia’s significant new acquisition, the foundation will host an exhibition of Holt’s work at their Chelsea location from September 15 2018. The retrospective will examine Holt’s oeuvre through the artist’s large-scale installations Holes of Light (1973)—which has since been gifted to Dia by the Holt-Smithson Foundation for the preservation of Nancy Holt’s and Robert Smithson’s legacies—and Mirrors of Light (1974), which has not been re-installed or recreated since 1974.

Together with the Holt-Smithson Foundation, Dia will also organize a series of public programs relating to the artist and her pioneering career to coincide with the exhibition’s launch.