Edward Hopper’s Creative Process: The Nighthawks and the Idyll

Renowned for his atmospheric oil paintings of lone or coupled figures, rural scapes and urban architecture, Edward Hopper’s creative process has been considered anew with a touring exhibition entitled Hopper Drawing: A Painter’s Process, organized by the Whitney Museum of American Art. We take a look at the show in the context of Hopper’s life and work, and come to unexpected conclusions about this all-American realist painter. 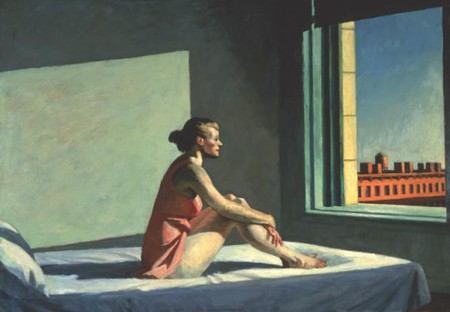 A flame-haired woman in a red dress carefully studies something held between her fingers, while her other arm rests next to a suited, cigarette-smoking man, his face overshadowed by a grey fedora with black band. Sitting on wooden bar stools they lean on a counter at which another man sits, his back to us. The salt and pepper shakers are half empty.

This offers a personally perceived reflection of Edward Hopper’s ‘Nighthawks’, of which he himself said: ‘Nighthawks seems to be the way I think of a night street. I didn’t see it as particularly lonely. I simplified the scene a great deal and made the restaurant bigger. Unconsciously, probably, I was painting the loneliness of a large city’. This loneliness is characteristic of much of Hopper’s work. At face value, Hopper is the ubiquitous realist painter who depicts everyday America in compositions lifted from his everyday world. However, his art and his philosophy run deep, unsettling us with an unexpected defamiliarisation, and an uncanny sense of being held at arm’s length.

Born in 1882 in the town of Nyack, New York, Hopper’s early flair for art, and his obvious talent, was encouraged by his family. Aged 18 he spent a year at the Correspondence School of Illustrating, New York, before moving to the New York School of Art where he studied for six years until 1906. While at this fine arts institution, Hopper encountered the likes of Robert Henri and William Merritt Chase, both of whom acted as professional mentors to him, and sought to channel his paintings into a realistic study on the present environment, most notably through life studies. Direct peers included George Bellows, Rockwell Kent and John Sloan, all of whom impacted his own development and artistic discourse with his immediate milieu. 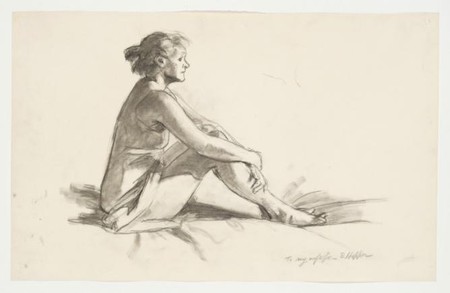 No stranger to the European continent, Hopper frequented Paris several times in the decade following his graduation from the New York School of Art. While in the French capital, Hopper found inspiration from the less contemporaneously popular Edouard Manet and Edgar Degas’ depictions of urban life as they knew, and saw it. A decade or so followed, during which Hopper was primarily based between Greenwich Village and New England, and he developed his fluid manner of using oils for which he has become renowned, as well as mastering etching, but to little public recognition. Indeed, it was not until 1920, aged 37, that he received his first solo exhibition at the then recently established Whitney Social Club, which featured sixteen paintings.

This significant show propagated more, with another exhibition following soon after at the Frank K. M. Rehn Gallery, New York, an establishment that became central to his public and professional image development. Meanwhile, the Museum of Modern Art (MOMA), freshly open, and keen to source the best contemporary work of its own city, acquired Hopper’s ‘House by the Railroad’ (1925) in 1930; a suitable choice typically considered to characterize his distinctive style and drive at that time. Three years later they held a retrospective exhibition of Hopper, which further raised his profile among international art circles, as well in the mind’s eye and media of quotidian New York.

Since this flourishing of his artistic profile and productivity, the Edward Hopper House Art Center was posthumously founded as a means of preserving the Nyack house in which Hopper primarily lived until 1910 and frequented until his death in 1967. Now, the house is symbolic of the community spirit that interweaves every stroke of Hopper’s work, as well as memorializing a building that was party to his ideas and offered the windows to the views of so many of his oeuvres. Now functioning as a not-for-profit organization aiming to nurture and showcase artistic talent, it also nurtures a wide-reaching engagement with Hopper’s own work, history, and textual art in documented letters and memorabilia. 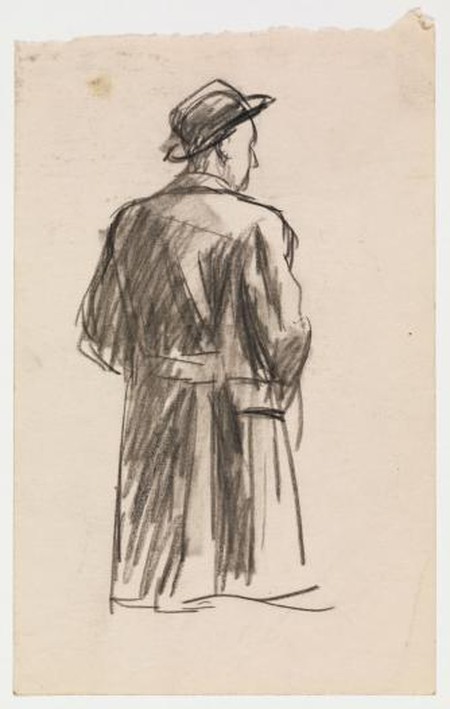 Meanwhile, sitting in the underbelly of North America, the Dallas Museum of Art recently hosted an exhibition titled Hopper Drawing: A Painter’s Process, originally sponsored by the Whitney Museum of American Art. Describing itself as ‘the first museum exhibition to focus on the drawings and creative process of Edward Hopper’, this imperative to present the workings of this iconic artist highlights the current reassessment of Hopper. More than the glorious depicter of all-American idylls, this touring project exposes a man whose creative process allowed him to explore the barest bones – and the ugliest – of human existence. Through his relationship with his regular model and wife Josephine (nee Verstille Nivision), the idiosyncratic image of the isolated woman that haunts so many of his pieces adopts a nostalgic tone, while the prioritization of a dark palette and shadow across his portfolio is suggestive of the ‘other’; the latent depression of everyday life and a strange stillness that opposes his personal sense of the irrepressible progression of time.

Even now, the European recipients of Hopper’s work frequently see it as supporting stereotypical images of the American lifestyle, particularly the scenes of weather boarded, white-washed New England houses and the landscape of Cape Cod, Massachusetts, where Hopper regularly holidayed with his family. However, the recurring tropes of an all-star United States, the realistic clean lines and light-rich paintings have been increasingly registered as mere surface value, behind which Hopper invites us to consider the fault marks in the seemingly perfect calm of quintessential coffee shop suburbia. Hopper’s images invariably create a cinematic focus, with a telescopic pressure on the objects on display. For this is the sense of much of his work – the sense that it is ‘on show’ – opening itself up to critique, facilitated by disallowing any familiarization with the scenes under inspection.

This oxymoronic tension is characteristic of Hopper. The lost privacy of the half-uncovered female in ‘Summer Interior’ (1909) appearing to be on the edge of a shaft of light from the blinds drawn down, but part open… The excessive gilded topography of ‘Silbers Pharmacy’ and the ostentatious window displays of ‘Drug Store’ (1927) highlight the striking lack of custom, while the houses perched on the crest of ‘New York, New Haven and Hartford’ (1931) are importantly beyond a railway track, set back behind another manmade transportation, that at once brings closer and provokes distance. Travel is endemic in Hooper’s work, in terms of the passage of daylight, the movement of wind and waves, as well as pragmatics of American civilization and leisure: architecture, sailing boats, gas stations, railroads and lighthouses. Frequently at play are struggles between tradition and progress, rural and urban, man and woman, presence and absence.

Nature and man also constantly convene on Hopper’s canvas in apparently harmonious compositions. However, it is the twinge of doubt as to this claim that I feel Hopper invites us to pursue through considerations of the potential emptiness of being the sole occupants of a painting, other than a cup of coffee of ‘The Automat’ (1927), or worse, the expressionless, faceless companion of ‘Chop Suey’ (1929). It is for this reason that Dallas’ A Painter’s Process was such an intriguing account of the artist. Rather than accepting the finished products at face value, they looked to the origins, the primitive sketches, and the slosh of watercolors, ultimately making viewers question the finality of any of Hopper’s work. Instead, his paintings invite a continuum of thought, provoking in their 2D preservation the possibility of a living legacy of his work – and of his social observations and political vision – across America, and indeed the Western world, today. Perhaps we will never really know what Hopper had to say, apart from by looking at every stage of his work. After all, he himself advised: ‘the whole answer is there on the canvas’.

Hopper Drawing: A Painter’s Process, organized by the Whitney Museum of American Art, is on display at the Walker Art Center in Minneapolis, MN, until 20 June 2014.