Eatwith Offers Exclusive Dining Experiences with Locals Around the World 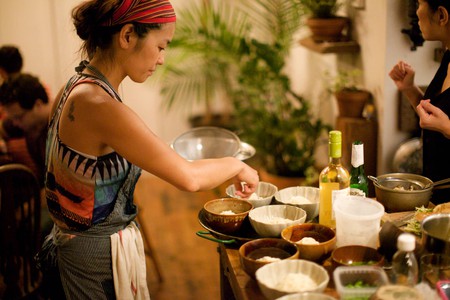 The social dining platform Eatwith has a name that invites questions, such as: who eats what with whom? But that’s precisely the company’s point of departure. At Eatwith’s dinner parties, which happen all over the world year-round, you have no idea who’ll be eating with you on any given night.

Eatwith launched in Paris in 2014, after co-founder and CEO Jean-Michel Petit had a lightbulb moment in Peru, at the home of a family he’d met while traveling. That dinner has since spawned a company whose mission is to give tourists the chance to dine with locals in their homes. Eatwith now includes five branch offices on three continents, and hosts food events year-round in 130 cities.

At a recent Eatwith dinner in Brooklyn, the guests who’d signed up for the event started milling around a small, plant-filled Williamsburg loft in the early evening, clutching glasses of wine, chatting, and glancing at the door to see who might walk in next.

The host that night was Ai Ito, a Japanese home chef who learned the cuisine from her mother. Ito was busy in her open kitchen off to the side, prepping the delicate goat milk and sesame tofu she’d be serving for the first course. She and her boyfriend have converted part of their rooftop into an urban garden, where they grow various greens, including the Japanese herb shiso that Ito uses in her cooking. 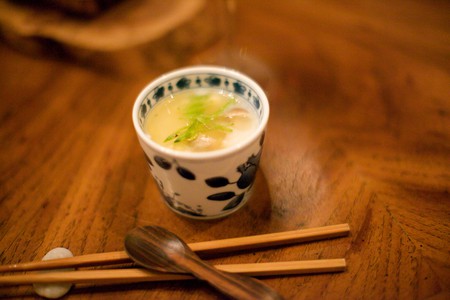 Slowly gathering in the hybrid living-dining room were a young TV producer, an older traveler, two roommates in their mid-20s from another part of Brooklyn, and a guest from Venezuela, among others. The group was shaping up as a mixed-age crew, diverse, far-flung, and enthusiastic about meeting others.

The intimate dinner parties that Eatwith hosts worldwide evoke the supper club trend, but instead of creating mystique and desire by forcing prospective guests to request an invitation – or procure one through word of mouth – the company takes a more democratic approach. Its site lists dinner parties, cooking classes or other culinary adventures available in each city on any given night. You pick the event that appeals to you based on the host’s profile, the menu, the location, the price, or any X factor that convinces you to hit “Book this experience.” Hosts range from individual home cooks and local families to Michelin-starred chefs.

As Ito brought out the first few courses – among them an egg custard with kabocha squash puree and soy-marinated ikuri (salmon roe), a slab of tuna cured like pastrami, and a spring roll filled with sake-marinated blue fish and shiso leaves – the dinner chatter started with the usual party small talk. Guests seated near each other kicked off with versions of “where are you from” or “what do you do?” and let the conversation take its course.

A parade of beautifully plated seafood courses arrived one by one, notably a fragrant rainbow trout bone soup, and a slice of cooked cod with heirloom tomato, eggplant, avocado and the Japanese vinegar Tosazu. Ito sounded a chime every time she brought out a course, breaking up the conversational hum for a moment to explain what guests were about to eat. One guest asked about the ceramic plates and bowls on the table, and it turned out Ito makes most of them herself. 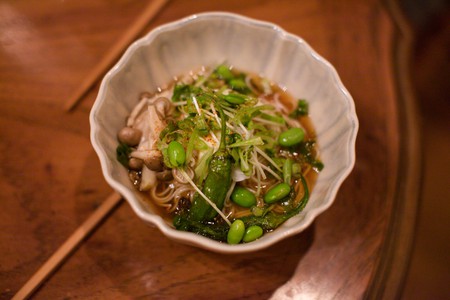 Dessert arrived, a light and sweet concoction that struck a welcome parting note: pear halves poached in cardamom and topped with cookie crumbles and cream.

As guests gathered outside to wait for taxis or unlock their bikes, promises to stay in touch rang out. Will anyone actually stay in touch? Who knows. But two hours of delicious Japanese home cooking, a steady flow of wine, and good vibes all around definitely signified one thing: mission accomplished.