Harlem in New York City is a hot spot for cultural, artistic, and political expression among the African American community and beyond. In recent years, the neighborhood has enjoyed recognition for a different aspect of this rich culture, its culinary scene. From El Barrio of East Harlem to Little Senegal in Central Harlem, from the exotic to the down-home, Harlem serves up a global smorgasbord of goodness. Here is our guide to the 10 best restaurants to try in Harlem. 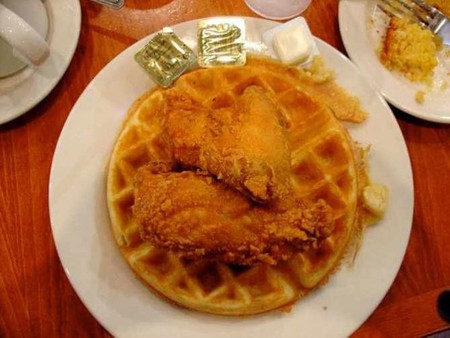 Walking through the front door of Amy Ruth’s, your eyes are assaulted by a color scheme of clashing orange and yellow hues offset by painted collages of MLK, MJ, Obama, and other influential African Americans. The visual cacophony is quickly overpowered by another sense as the aroma of fried chicken and sweet, syrupy waffles overwhelms you. For going on two decades, Amy Ruth’s has been serving up no-frills, home-style Southern cooking. And while the food is consistently good across the board, if you’re a first timer here, it would be considered blasphemous by regulars and the Rev. Al Sharpton to not try the famous chicken and waffle that bears his namesake. 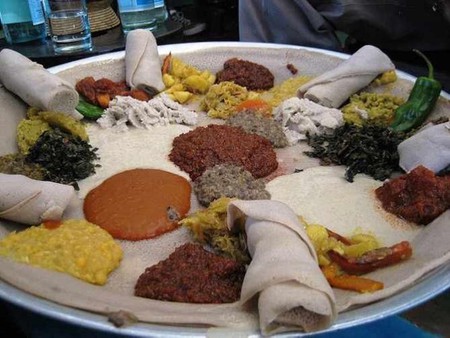 Restaurant, Ethiopian, $$$
Facebook
Email
Twitter
Pinterest
Copy link
Share
Get your hands dirty at Abyssinia Ethiopian Restaurant in Central Harlem. Abyssinia has everything you want it an authentic Ethiopian restaurant experience, doro wat (chicken), key wat (beef), shiro wat (chickpeas) and other stews, a variety of tibs dishes (cubes of stir-fried meat sautéed in a spiced clarified butter), and of course the ubiquitous, fermented spongy flatbread called injera. For maximum sampling, go with a large group and order a couple of the mixed veggie and meat plates. Sop up all the juices with what’s left of the injera, and wash everything down with a glass of sweet honey wine. 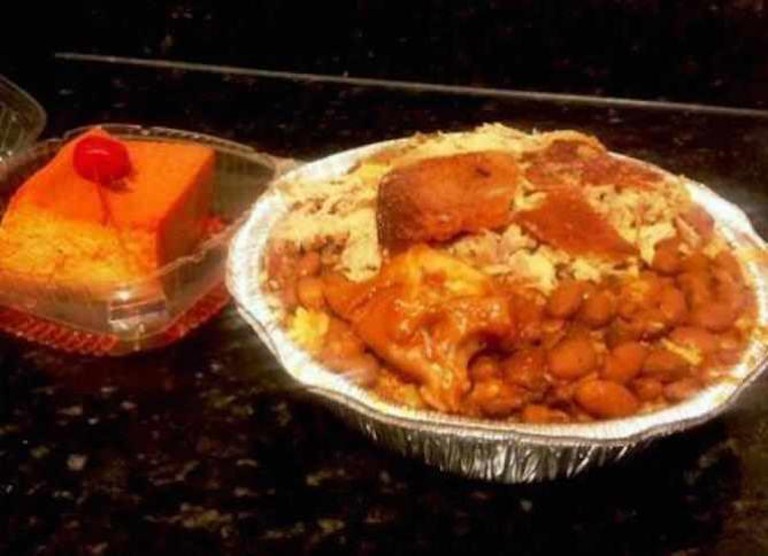 Pernil, pigs feet, rice and beans and flan at Lechonera La Isla | © Olivia Edwards
La Savane, a West African restaurant at the intersection of Senegalese, Ivorian, and Ghanaian influences. Here again a variety of soups and stews are central, in addition to starchy dishes like attiéké and foutou. When ordering your mains, look no further than the gigot, a braised lamb shank that practically melts in your mouth. If staring your dinner full in the face doesn’t bother you, order the whole fried fish, complete with head, tail, and needle-like bones that must be expertly navigated in order to avoid becoming a choking hazard. If anything, this only adds to the experience, as locating and discarding the tiny slivers forces you to slow down and savor the golden fried, flaky goodness.

Restaurant, American, Spanish
Facebook
Email
Twitter
Pinterest
Copy link
Share
The Spanish word for roast pork, lechón, is exactly what you will find at this hole-in-the-wall Puerto Rican restaurant in Spanish Harlem, or El Barrio, as the locals call it. The pernil, or roasted pork shoulder, balances the salty fattiness of the meat with the crackly crispiness of the skin, and a drizzle of spicy garlic sauce brings the whole dish together. Complete your meal with a generous helping of beans and rice, throw in a couple of pigs feet for good measure, and maybe try one of a variety of beef-stuffed items, alcapurrias or rellenos de papa.

Restaurant, French, $$$
Facebook
Email
Twitter
Pinterest
Copy link
Share
This East Harlem joint cooks up French comfort with a focus on fowl, as in cock’s combs cutlet, chicken liver mousse, and ostrich crostini. If this exotic fare has got your feathers in a ruffle, the less daring chicken schnitzel or BBQ mini turkey burger might instead tickle your fancy. If the menu doesn’t already have you clamoring for a ride up the six, perhaps the revelation that this current iteration of Mountain Bird (the original 145th Street location shuttered last summer due to a rent hike) is a pop-up, will. Temporarily closed until September, there’s no word yet on whether the re-reopening will bring extended hours or a permanent locale. Certainly this shroud of mysterious inaccessibility will only increase Mountain Bird’s appeal as the allure of foie gras dumpling consommé compels diners Harlem-ward.

In further fowl-focused fare, Chef Marcus Samuelsson brings Ethiopian/Swiss sensibilities to his latest Harlem restaurant. Decked out from floor to ceiling with early hip-hop memorabilia, Streetbird elevates the rotisserie chicken to Jay Z level. The grand opening this year generated a lot of buzz thanks to the following that Samuelsson has built up around his much-venerated Red Rooster on Lenox Avenue in Harlem. Keeping the home-cooked, poultry-focus alive at Streetbird, Samuelsson serves a selection of chicken-centric dishes in addition to more global-infused selections like doro wat and a curry veggie noodle. And just for fun, there’s a red velvet chicken and waffles entrée.

Take a Xi’ang Noodles, hipsterfy it with reclaimed wood and vintage signage, cut out the long lines, and you have The Handpulled Noodle in Harlem’s Hamilton Heights. This recently opened ‘North Western Chinese Soul Food’ restaurant serves a variety of dense, handpulled noodles, ribbon, lagman, and ding ding, as well as a selection of soups, salads, and dumplings. Mix and match noodles and pairing styles to create your own veggie or meat stir-fry or soup. Or leave it to the pros and go with one of the ‘native picks’, the old Beijing Bolognese (zhajiangmian with lagman) is a stand out here.

What’s better than Caribbean jerk chicken, oxtail stew, and callaloo? Caribbean jerk chicken, oxtail stew, and callaloo with a Southern twist. Sisters Caribbean on 124th and Madison delivers on both fronts. The sweet and spicy flavors characteristic of Caribbean cuisine come to life in dishes like the curried goat and the vegetable roti, while sides of collard greens, candied yams, and mac and cheese evoke a taste of Southern comfort food. Since its opening in 1995, Sisters Caribbean has been an island of eclectic down-home cooking for Harlemites hungry for a little slice of paradise.

Restaurant, Central American
Facebook
Email
Twitter
Pinterest
Copy link
Share
Ecuatoriana offers a wide-range of authentic Ecuadorian dishes, including meats and stews ranging from unassuming roasted pork to the more adventurous caldo de pata, plenty of beans and rice, and a variety of ceviches. The fresh flavor of cilantro, onions, and tomatoes and the brininess of the seafood is always a winning combination, but Ecuatoriana manages to elevate the ceviche to a whole other level. This Sugar Hill establishment draws a steady crowd of savvy locals who know that Ecuatoriana is one of the few places in Manhattan where you can find this flavorsome Central American cuisine.

Bar, Restaurant, German, 0
Facebook
Email
Twitter
Pinterest
Copy link
Share
We end our global food tour of Harlem with a cold one at Bier International. With 20 taps and an extensive bottle list, Bier International is at the center of Harlem’s craft beer scene. The focus here is German beers, citrusy pales ales and crisp wheat beers, although there are plenty of options available for IPA and stouts aficionados. The food is decent, traditional German meets pub fare with selections like schnitzel, burgers, tacos, and Bavarian pretzels. Catch a soccer game or live music on the weekend. For some good old-fashioned entertainment, order rounds of boot-shaped glasses and watch things get weird.
Give us feedback