In Queens, an Annual Dragon Boat Festival Brings Cultures Together 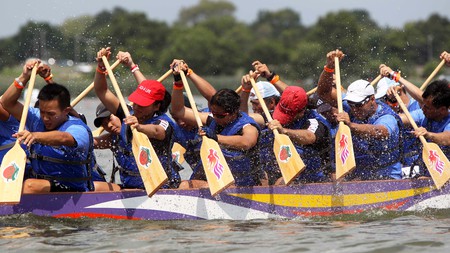 Launched in 1990, the Hong Kong Dragon Boat Festival is an annual multicultural event in Queens, New York. The highlight of the two-day celebration is the dragon boat races, where boats designed to resemble dragons gracefully glide across the Meadow Lake in quick succession.

In 1990, The Hong Kong Economic and Trade Office in New York City was tasked with creating an event that would showcase the growing relationship between Hong Kong and the United States. That summer, the first Hong Kong Dragon Boat Festival took place on the Hudson River off Battery Park City.

“It was supposed to be a one-year promotion, but it got so many positive reactions we decided to make it an annual event,” says Henry Wan, president of Wan Development Group and co-founder and chairman of the Hong Kong Dragon Boat Festival. 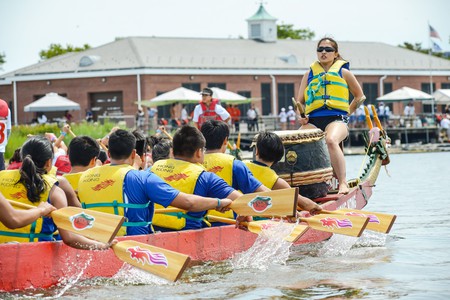 The summertime event debuted with 10 teams competing in a traditional Chinese boat race. Today, it has grown into one of the largest dragon boat festivals in the US, with approximately 200 teams and 2,500 competitors participating at the Meadow Lake in Flushing Meadows Corona Park in Queens, New York.

The origins of dragon boat racing are based on the legend of Chinese poet Qu Yuan, who lived from 340-278 BC. Qu was a court minister who advocated reforms for his home state of Chu; however, the corrupt King of Chu disliked Qu and banished him. Wandering the countryside writing poetry expressing his concerns for his homeland and its peoples, Qu drowned himself out of despair in the Miluo River. Qu was so beloved that local fishermen quickly hopped on their boats and tried to save him, tossing out rice dumplings and food into the water to keep the dragons from eating him. Every year after, they memorialized his death on the same date by throwing rice dumplings into the water to appease the dragons.

That myth evolved into the beloved sport that’s prevalent around the world today. Held on the anniversary of Qu’s death – the fifth day of the fifth lunar month – the Dragon Boat Festival commemorates his legacy. Four days before the event, the boats are taken from their resting place and the dragon heads and tails are attached. They are ritually blessed by a monk and later brought to life by having their eyes dotted with red paint.

“Each boat has a dragon head and a dragon tail, so when you see them on the water they look like a painted sculpture gliding on the water,” marketing director David Archer says. “They’re quite beautiful.” 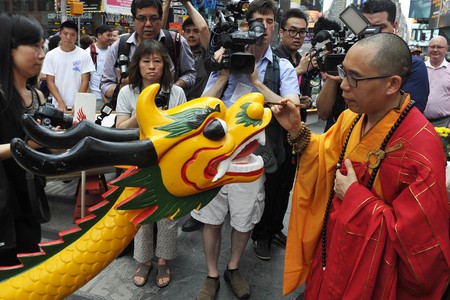 The traditional dragon boats were carved out of teak – a tropical hardwood tree – but since teak is now an endangered species, it is no longer used. Instead, most of the boats are made out of fibreglass. The 37-foot-long boats weigh a ton, yet can easily soar along the water.

“The boat is very colorful,” Wan says. “It’s spectacular to watch when you have multiple teams racing on the water.”

Each boat has a crew of roughly 22: 20 paddlers (10 on each side), one drummer at the front of the boat facing the rowers, and one steerer at the rear to direct the vessel. The drummer’s responsibility is to keep the beat of the boat: the beat slows down and speeds up according to the height of the competition. For the races, the boats coast along the man-made Meadow Lake in a straight path, aiming for the finish line. The race itself is between 250-500 meters, so it doesn’t take long for each heat to complete from start to finish. Winners are awarded with medals, with past years granting a cash prize as well.

The free festival in NYC boasts teams from around the country and even the world; Wan says groups from Italy, Canada and even China have previously competed. There are tons of spectators who come to the Meadow Lake just to watch – between 10,000-20,000 people are expected each day – and take in the rest of the festivities: artists teach children Chinese crafts, there’s a multicultural food court and entertainment from the likes of the kung-fu-trained Shaolin monks, blues artists and master storytellers spinning tales of dragons. 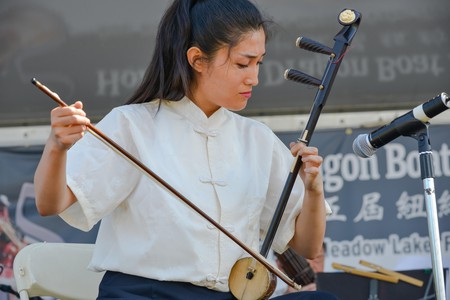 “You get people coming from all over Queens, all over the New York metro,” Archer says. “It’s a real melting pot.”

As the event expanded, the goal changed. While the primary focus was to highlight Hong Kong-US relations, the festival continued to display Chinese tradition and culture – particularly in regards to the dragon boat race – and grew into a multicultural event spotlighting various cultures from around the world. For instance, the food court is a celebration of Queens’ bounty: tents overflow with peking duck buns, Jamaican jerk chicken, lobster tacos and kebabs.

“We are always very pleased that so many people have supported us,” Wan says. “We want to bring people from all countries all over the world together.” 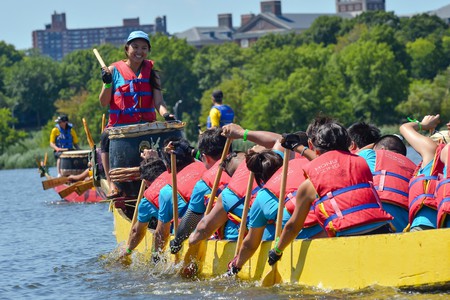