Downtown Brooklyn: 10 Things To Do And See

Downtown Brooklyn, known for being the third largest central business district in the city, also happens to be teeming with diverse cultural institutions, compelling museums, ethnic restaurants, scenic waterfront views, and green spaces. With many points of interest and a wide range of activities to keep any New Yorker entertained, downtown Brooklyn is the ideal area to venture off to when you need a break from Manhattan’s hustle and bustle. 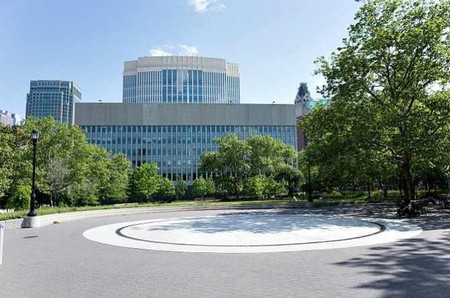 Park
Facebook
Email
Twitter
Pinterest
Copy link
Share
Map View
Named after one of New York City’s most famed poets, Walt Whitman Park has become one of Brooklyn’s most popular landscaped parks as well as the ideal spot to kick back and relax especially during the warm spring and summer months. With relatively newly renovated park benches, well-paved paths, fencing, and water drainage, the park also features gaming tables and large expanses of fresh greenery for locals and visitors hoping to escape from downtown Brooklyn’s industrial environment for a change of scenery. So, ride your bicycle through the pathways, take a leisurely walk underneath the tree canopies, or simply lounge about on a bench or picnic blanket laid out across the grass, because Walt Whitman Park welcomes all for a peaceful day in nature! Walt Whitman Park, Cadman Plaza E, Brooklyn, New York, NY, USA
Open In Google Maps
Cadman Plaza East, Downtown Brooklyn, Brooklyn New York, 11201, USA
+12126399675
Visit Website
Give us feedback 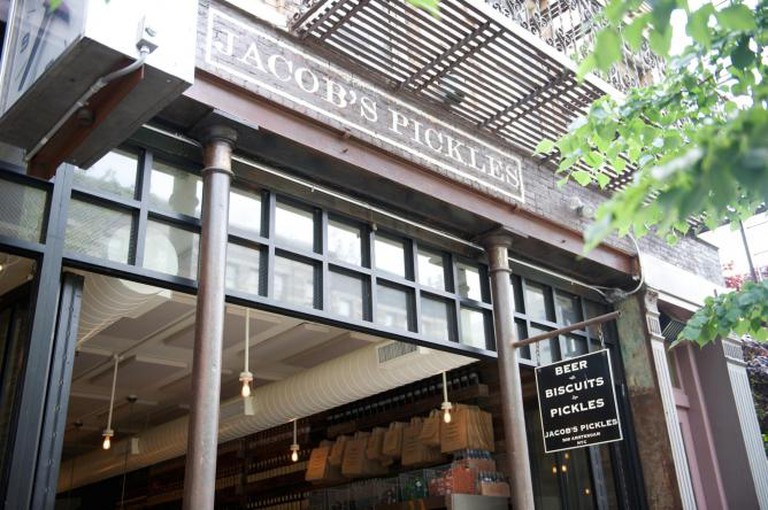 Jacob's Pickles | © Danielle Zaria Praport
Hill Country Barbeque Market brings the cuisine and vibes of down South to Brooklyn, with freshly cooked barbecue made in a custom meat-smoking room, live American Roots Music in the lively Boot Bar on select days throughout the week, and a communal seating arrangement in a casual cafeteria-style dining area. The savory brisket, sausage, and ribs are smoked over Texas post oak and are served in classic country-style over the counter, alongside sides such as cheddar mac and cheese and hot German potatoes. For customers with an insatiable sweet tooth, Hill Country’s dessert menu includes banana pudding, seasonal crisps, and gooey chocolate chunk cookies which will have you licking your fingers in delight! Hill Country’s bar does not disappoint, with a wide array of beers, wines, tequila, bourbon, and specialty cocktails.
Open In Google Maps
30 West 26th Street, Manhattan New York, New York, 10010, USA
+12122554544
Visit Website
Give us feedback 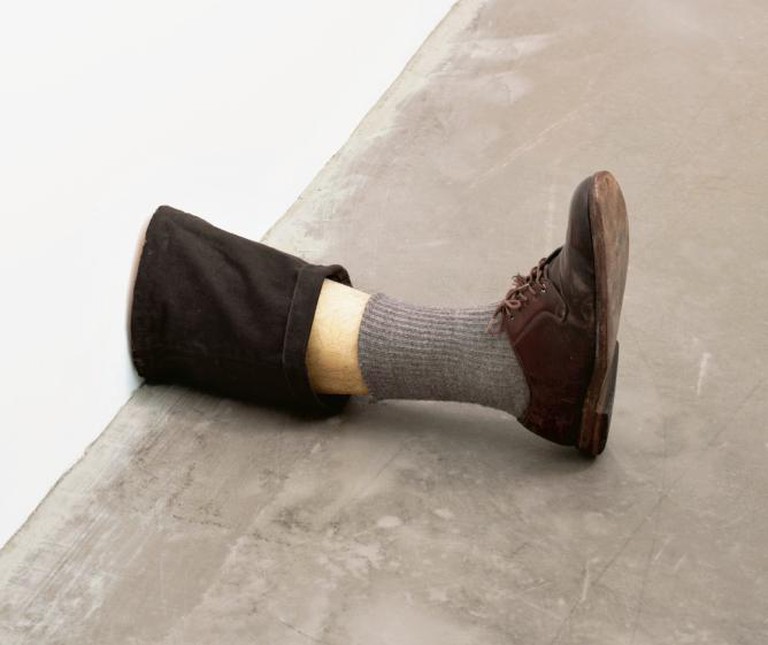 Robert Gober, Untitled Leg. 1989 – 1990, 11 3/8 x 7 3/4 x 20” (28.9 x 19.7 x 50.8 cm) | Courtesy of The Museum of Modern Art, New York. Gift of the Dannheiser Foundation, | © 2014 Robert Gober.
Brooklyn Museum is a haven of jaw-dropping international cultural art pieces and artifacts, from ancient Egyptian masterpieces and European paintings to modern-day, contemporary art. The museum’s wide range visitor programs are sure to appeal every visitor’s interests, offering day camp visits, movie nights, and studio art courses for youths and teens as well as photography and painting technique classes for adults. Brooklyn Museum’s collections are on display throughout the year, showcasing one-of-a-kind pieces from the Islamic World, the Americas, the Pacific Islands, Asia, and Africa, while current exhibitions include Impressionism and the Caribbean: Francisco Oller and His Transatlantic World and Zanele Muholi: Isibonelo/Evidence.
Open In Google Maps
200 Eastern Parkway, Brooklyn New York, 11238, USA
+17186385000
Visit Website
Give us feedback 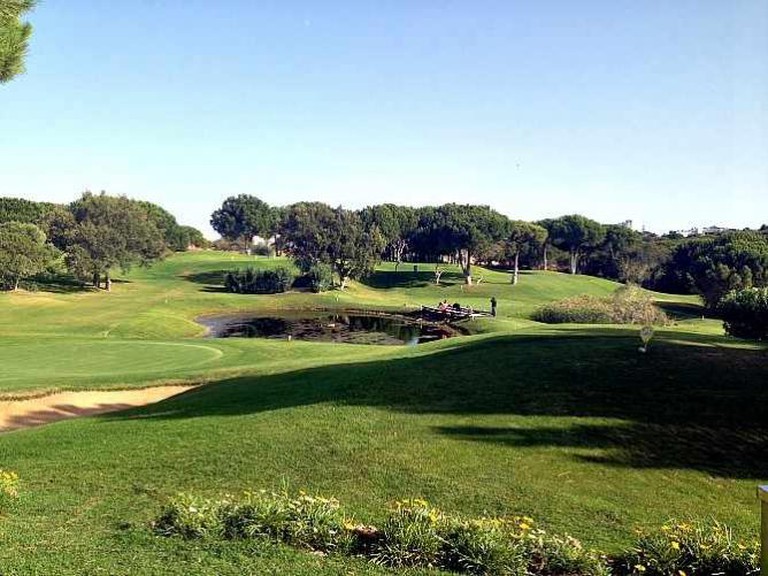 Golf Course | © Sean MacEntee/Flickr
Pollo D’Oro, a Peruvian gem located in the heart of Downtown Brooklyn, is open from breakfast to dinner serving up the city’s best ceviche, rotisserie chicken, and signature pisco sour cocktails. Pollo D’Oro’s dining space is casual, yet contemporary with soft lighting, shiny white tabletops, and a full bar service against an icy blue backdrop, inviting in an eclectic crowd from business workers on their lunch break to groups of families and friends looking for a quick dinner. Hot tamales, made with steamed corn masa in husk with onion and olives and a choice of meat or cheese, Aji de Gallina (shredded chicken breast in creamy walnut and Aji sauce with a side of boiled eggs and rice), and Lomo Saltado composed of marinated strips of steak sauteed with onions and tomatoes are only a few of the many tasty South American dishes served here.
Open In Google Maps
306 Gold Street, Downtown Brooklyn, Brooklyn New York, 11201, USA
+17188558088
Visit Website
Give us feedback

Sports Center
Facebook
Email
Twitter
Pinterest
Copy link
Share
Map View
An 18-hole Championship Golf Course that is open to the public throughout all four seasons of the year, and also happens to be located in the center of metropolitan Brooklyn? It almost sounds unreal, but Marine Park Golf Course, designed in 1964, offers visitors a gorgeous waterfront view alongside country club quality fairways, golfing lessons, and an aesthetically satisfying, well-manicured driving range and practice area. The golf course boasts four sets of tees crafted for players of all ages and levels of expertise as well as a Pro Shop which carries shoes, spikes, gloves, balls, shirts, grips and clubs for those wishing to accessorize in style while out on the lawns. Marine Park Golf Course’s bar and grill serves a diverse variety of cuisines and menu options including Brooklyn-style fish and chips, hot roast beef sandwiches, and buffalo chicken wraps which make the perfect pick-me-up after spending a long day at the tees. The venue also caters to parties, weddings, and special events.
Open In Google Maps
2880 Flatbush Avenue, Brooklyn New York, 11234, USA
+17182524625
Visit Website
Give us feedback 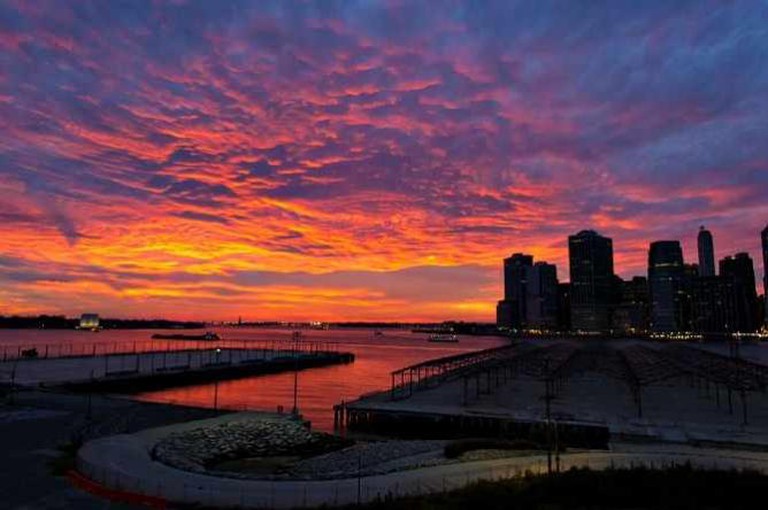 Untitled | © Dwayne Bent/Flickr
The history and present-day development scheme of the Brooklyn Navy Yard is encompassed within BLDG 92’s exhibitions, programs, and galleries. Intermingling natural, cultural, social, naval, and industrial narratives, the Brooklyn Navy Yard: Past, Present and Future main exhibition tells the story of one of the nation’s first five naval shipyards (established since 1801!), through a portrait mural which also features short videos. Other permanent exhibitions include Designing the Future, A Day in a Life at the Brooklyn Navy Yard, Making it in NYC, and temporary displays such as Porthole to Freedom created by a teenage Brooklyn-based photographer along with Wesley Fagan: A Life in Pictures, which is a tribute to one of the Navy Yard’s messengers who later became the supervisor of the Photographic Division with a love for playing jazz music. BLDG 92 also offers interactive workshops, a visiting artist program, and cultural performances amongst other public programs.
Open In Google Maps
63 Flushing Avenue, Brooklyn Navy Yard, Brooklyn New York, 11205, USA
+17189075932
Visit Website
Give us feedback 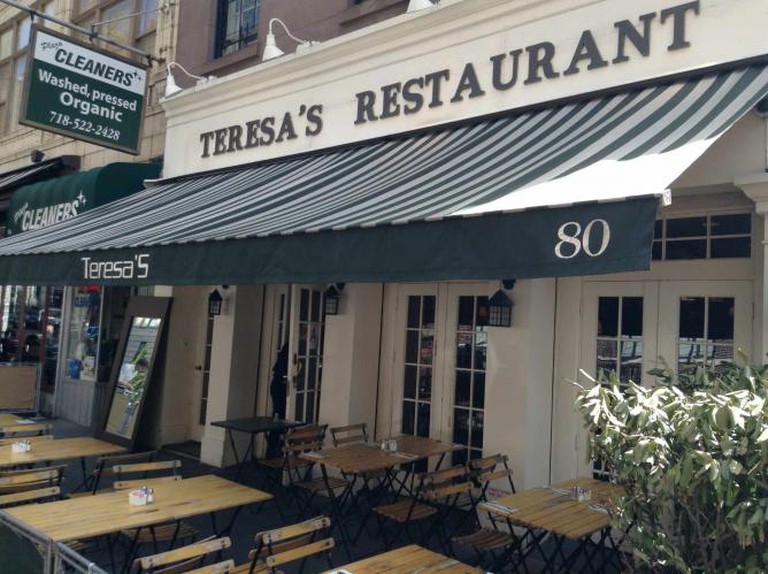 Brooklyn Heights Promenade, Brooklyn | © Jackie Goldman
The Brooklyn Heights Promenade captivates the City’s most breathtaking views along a 1,826-foot long platform and walkway stretching across Interstate 278. Capturing a quintessential view of the city skyline, picturesque sunrises and sunsets, the Brooklyn Bridge, and East River, the Promenade is lined with majestic town houses and mansions which complete the romantic feel of the location. The walkway is a magnet for photographers and artists who appreciate a scenic spot, along with joggers, couples spending quality time with one another, and skateboarders looking for a getaway from Brooklyn’s residential blocks and commercial districts. The northern end of the strip allows visitors to walk off the path towards the foot of the Brooklyn Bridge, whereas the south end allows a stroll through the cobblestone streets of the Brooklyn Heights neighborhood where you can stop for a quick bite to eat at one of the many cozy eateries.
Open In Google Maps
Pierrepont Place, Brooklyn Heights, Brooklyn New York, 11201, USA
+12126399675
Visit Website
Give us feedback 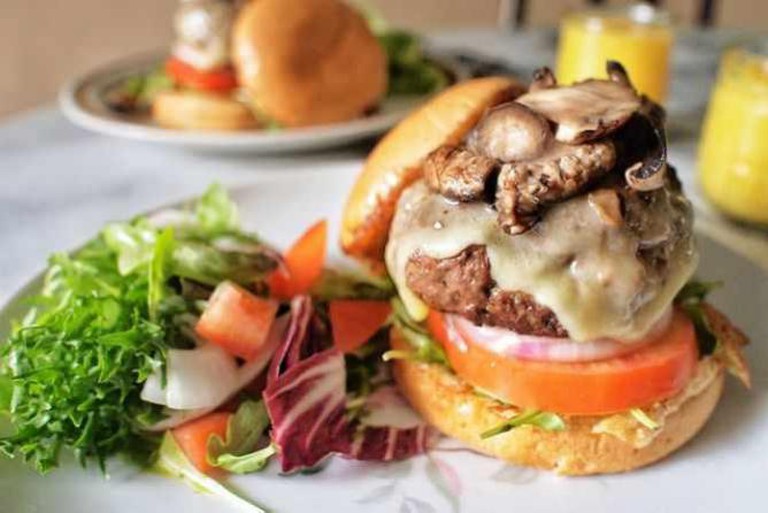 The three and a half acre expanse of Brooklyn Bridge Park is worthy of an entire day trip, and multiple ones! The activities and attractions at this waterfront recreational area are endless, with children’s playgrounds, basketball courts, boating, a soccer field, handball courts, bird watching, a pop-up pool, and picnic areas to choose from. Eateries dotting the park include Ample Hills Creamery with lovely baked goods, snacks, and ice cream, along with breakfast foods from Brooklyn Bridge Garden Bar, a lunchtime meal of sandwiches, pizza at Fornino, and Lizzmonade, serving Brooklyn’s artisanal lemonade as well as sangria, beer, and wine for the adults. Those with an eye for arts and culture would delight in the park’s Bargemusic family concerts, Shakespeare at Sunset, and SyFy Movies with a View, amongst other seasonal park events. 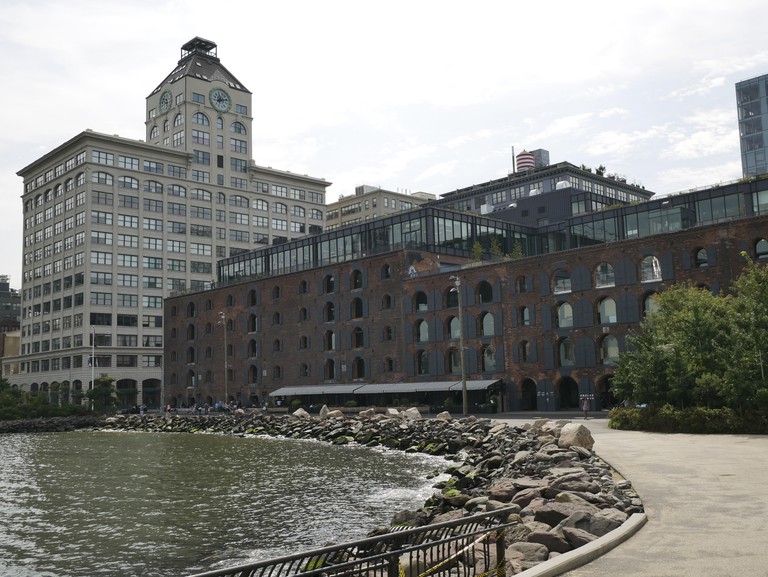