Did You Know the Marx Brothers Were Born in Manhattan? 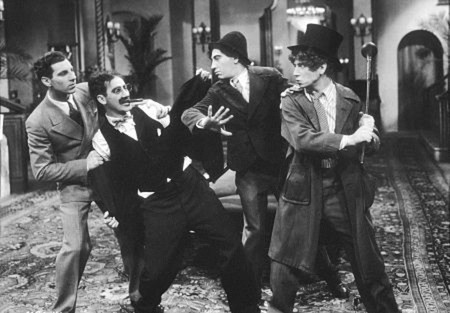 Years before they introduced anarchy to Hollywood comedy, Groucho, Harpo, Chico, and Zeppo—and not forgetting Gummo—made “Marxist” mischief on the Upper East Side.

Sixty-nine years after their last feature film, Groucho, Harpo, and Chico Marx remain the most subversive American film comedy team of all time.

Laurel and Hardy, Abbott and Costello, Bing Crosby and Bob Hope, Jerry Lewis and Dean Martin, the Blues Brothers, and the Ghostbusters gang have their supporters, of course, but only Britain’s Monty Python troupe has matched the Marx Brothers for chaotic, socially disruptive energy.

As well as the Pythons, the Marxes’ iconoclastic Dadaist routines influenced Samuel Beckett in the writing of Waiting for Godot (1953), BBC Radio’s The Goon Show (1951–1960), the Beatles’ acting in A Hard Day’s Night (1964) and Help! (1965),Woody Allen, and Judd Apatow, among others.

There were five Marx brothers in all. Gummo, the second youngest, was an original, 13-year member of their long-running stage and vaudeville act, but left it to join the Army in October 1918, just before the Armistice. 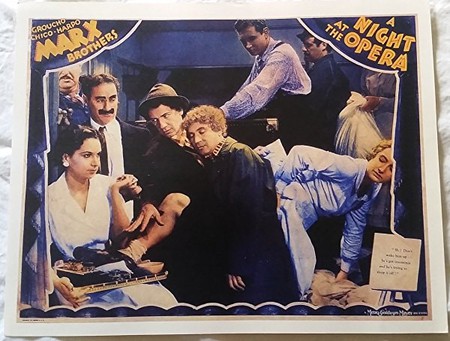 Zeppo then left the act, tired—like Gummo before him—of playing stooge to Groucho, Harpo, and Chico.

Beginning with MGM’s A Night at the Opera (1935) and A Day at the Races (1937), both more lavish than their Paramount predecessors, the three zanies were joined by a range of handsome and/or musically talented straight men for their remaining eight films.

The Marxes’ greatest stooge, however, was the society matron played by Margaret Dumont (and humiliated by Groucho) in seven of their 13 movies. 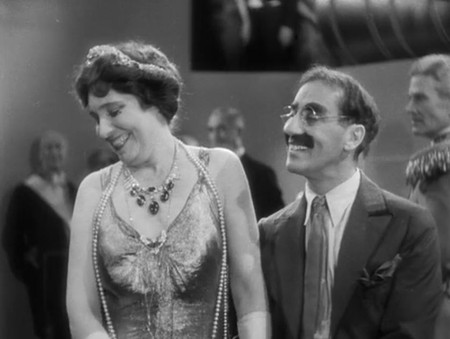 The brothers were the sons of Jewish immigrants Simon or Sam (“Frenchie”) Marx (or Marks), a well-dressed but apparently incompetent tailor born to German parents, most likely in Strasbourg, Alsace, France, in 1859, and Minnie, born Miene Schönberg, born in Dornum, Germany, in 1864.

Minnie was one of eight children; her father Lafe (or Levy) had been a traveling magician and ventriloquist back in Germany, and her mother Fanny had been a yodeling harpist. In America, their son Abraham, one of Minnie’s brothers and the Marx Brothers’ uncle, became famous as Al Shean in the vaudeville comedy duo Gallagher and Shean.

Sam immigrated to the U.S. in 1880 or 1882; Minnie’s family arrived in 1879 and settled at 376 East 10th Street in what is now the East Village. Minnie worked in a fur sweatshop and possibly a hat shop, where she may have met Sam. Alternatively, she may have met him at a Second Avenue dancing school.

“According to Arthur Marx, Groucho’s son, Sam was a dancing instructor at the school,” writes Simon Louvish, the author of Monkey Business: The Lives and Legends of the Marx Brothers (1999), “and chatted up the ebullient blonde while on a Sunday boat to North Beach.” 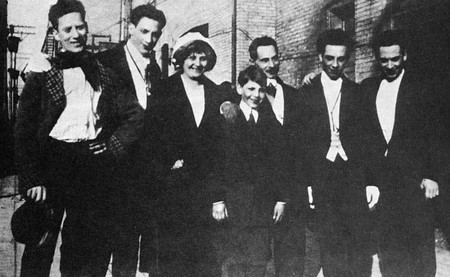 Sam and Minnie were married on January 18, 1885. Minnie’s sister Hannah gave birth to her daughter Pauline that month. Probably illegitimate, Pauline was adopted by Sam and Minnie and found herself in an older sister role as she grew up alongside her rascally male cousins. 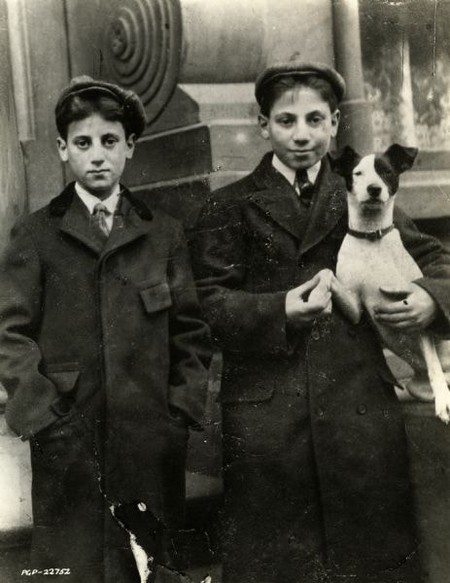 The period of greatest stability was 1895 to 1909, when the family lived in an apartment at 179 East 93rd Street, between Lexington Avenue and Third Avenue.

Harpo described the area as “a small Jewish neighborhood squeezed in between the Irish to the north and Germans to the south in Yorkville.” The Marxes were Yorkville boys who regarded the upper-class area west of Lexington with something akin to awe. It may have fed Groucho’s on-screen need to puncture the rich and pompous. 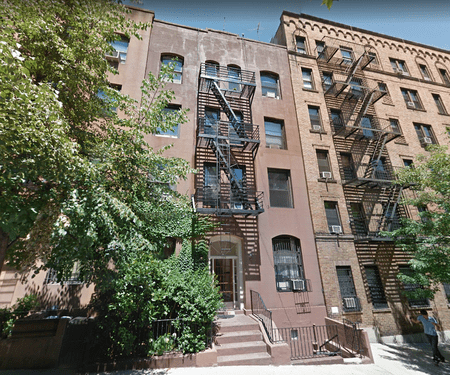 “Despite Harpo’s memories of the house as a ‘tenement,’ this was not the poor part of town,” Louvish writes of East 93rd Street. “The architectural shape of the street has in fact been preserved to this day, with its four-story blocks and corner mansions. The neighbors at the adjoining addresses included butchers, clerks, civil engineers, a fur manufacturer, musicians, cigar makers, a dry-goods merchant, a real-estate broker. Some of the households in the street list [in the 1900 census] a servant resident, although a maid could often be afforded by even lower-middle-class families well into the 1930s.”

If Sam and Minnie ever engaged a maid, one can imagine Adolph chasing her around the apartment. Harpo was the scourge of ordinary girls in the Marx Brothers’ movies, though if he caught one he was as likely to asphyxiate her and himself (after asphyxiating everyone else) than steal a kiss: see Animal Crackers.

Leo and Adolph attended Public School 86 at 96th Street and Lexington. Given their unruliness, teachers must have counted the days until they dropped out. It was Julius who was the bookworm brother. He was not so earnest, though, that he didn’t join with Adolph in wrenching a urinal from the wall at Pauline’s wedding in 1903.

Harpo wrote fondly of his childhood at number 179. Despite the relative poverty, “My memory of my earliest years is vague but pleasant, full of the sound of singing and laughter, and full of people I lived.”

While Harpo’s describing of his home as a “tenement” should not be taken with a pinch of salt, the designation “built in 1910” that describes current real-estate listings at 179 East 93rd Street almost certainly means “redeveloped.” (The buildings on “Marx Brothers Place” remain under threat of fresh redevelopment by condo builders.) 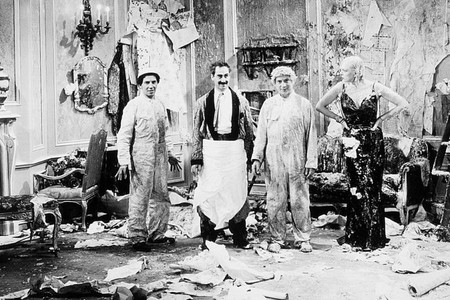 Chico, Groucho, and Harpo Marx with Esther Muir in ‘A Day at the Races’ | © MGM

Those Marx Brothers fans who stand outside the building and take a snap of it—no doubt imagining Groucho, Harpo, Chico, and little Zeppo tumbling down the stoop into a heap—should be reasonably assured that the building hasn’t changed that much. But the mayhem once perpetrated behind the curtains or blinds in one of the apartments must have lessened.

For various New York City and Long Island addresses occupied by the Marx Brothers between 1920 and 1931, visit www.marx-brothers.org.

You may also like: Did You Know Barbara Stanwyck Was Born in Brooklyn?.