Dick Traum Turns Tragedy Of Losing Leg Into Inspiration For Others 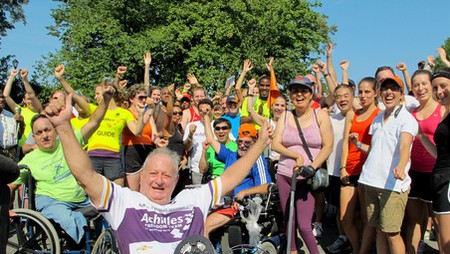 Dick Traum (front) became the first amputee to run a marathon when he ran the 1976 NYC Marathon. | © Courtesy of Achilles International

Dick Traum was standing behind his car at a gas station along the New Jersey Turnpike. Another car pulled up behind Traum’s car. The driver, noticing the cars were inching closer and closer, tried jamming on the break, but instead slammed on the gas.

Traum was crushed between the two cars. Both his legs were severely injured. His right leg became infected and had to be amputated above the knee.

May 30, 1965 should have been an ordinary day for the 24 year old, but it was a day that would change the shape and direction of Traum’s life forever.

“It didn’t affect me mentally as much as one would think,” Traum, 75, said. “For some reason, it wasn’t, ‘Oh my goodness, what was I going to do?’ I was positive. I just wanted to get on with my life. There was no ambiguity. If you had cancer you’d be worrying if you’d get better or what happens next.

“This was simple and clear — I lost my leg.”

The standout high school and collegiate wrestler didn’t wallow in self pity. Instead, he turned his disability into motivation and inspiration and hasn’t looked back since.

Traum founded Personnelmetrics, Inc., a consulting firm, five years later. Business was booming by 1970, but his focus on work took a toll on his body. He was out of shape and, coupled with a peer’s heart attack, Traum, then in his early 30s, was concerned about his health. A colleague suggested he join the West Side YMCA.

Like the other members of the YMCA, Traum had to run for 10 minutes in order to be part of the fitness program. He hop-stepped his way around the gym. Ten minutes turned into one mile. One mile turned into five. Five miles eventually turned into 26.2.

On October 24, 1976, Traum completed the New York City Marathon in seven hours, 24 minutes, becoming the first amputee to run the distance. At the time, he didn’t realize the importance of the accomplishment. Traum would become the flag bearer for disabled runners.

“It’s a great feeling,” Traum said. “It’s the kind of feeling very few people probably have. The joy is in seeing someone who never in their lifetime would you expect them to do long distance running and they’re out there as happy as I was in that process.” 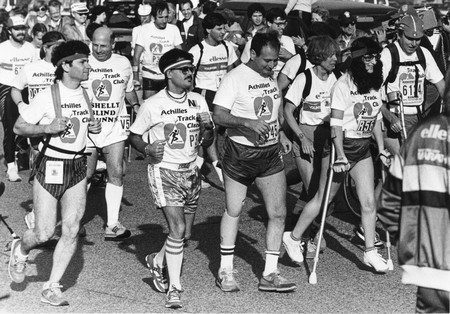 Traum’s story, which was featured in Runner’s World, became a source of inspiration for Terry Fox in 1977. Fox, a high school athlete in Canada, had to have his leg amputated because of bone cancer. Like Traum, Fox was determined not to let his disability become a limitation. He set out to run a marathon every day until he ran the length of Canada (5,000 miles), calling it the Marathon of Hope, which would raise money for cancer research. Fox made it over 3,300 miles, but had to stop because the cancer had metastasized in his lungs; he never recovered and died in 1981.

Seeing how his story and journey could inspire others, Traum created an eight-week running program for people with disabilities. Instead of extending the program or creating a new one, Traum created Achilles Track Club for runners with disabilities on January 9, 1983. Achilles International, as it is known today, got its name from the Greek hero, who like all of the club’s members, has a vulnerability.

“People seeing our presence helped,” Traum said. “If they have MS (multiple sclerosis) and see other people running, it looks natural. We wanted to make running for people with disabilities a normal and natural thing. It isn’t, ‘Oh my goodness, there’s a one-legged guy running.’”

Today, Achilles International is just that — it’s represented in 70 countries around the world including Australia, Germany, Peru, South Africa and Lebanon. The non-profit organization has helped more than 10,000 disabled athletes compete. 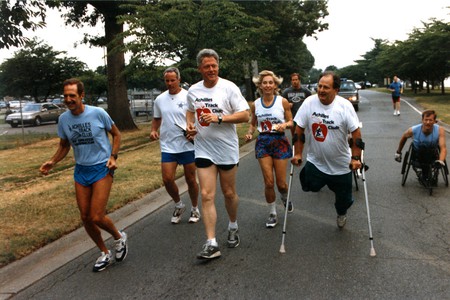 Dick Traum (right) and members of Achilles run with President Bill Clinton in Washington, D.C. in 1993. | © Courtesy of Achilles International

Traum, the President and Founder, continues to be an active member. Literally. He will run his 25th New York City Marathon on Nov. 6. Since he had knee replacement surgery 15 years ago, Traum will complete the race utilizing a hand bike.

“When I had knee surgery, I realized it’s time to stop running on my artificial leg,” he said. “I’ve done 50 marathons with the hand cycle — Detroit a few weeks ago, NYC this week and I’ll be in Havana, Cuba, on Nov. 20. I keep active.”