'David Bowie Is' Takes Over the Broadway-Lafayette Subway Station 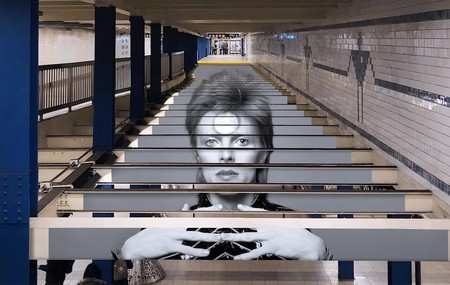 A collaboration between Spotify and the Brooklyn Museum has rendered the Broadway-Lafayette subway station a sprawling tribute to the late, great David Bowie.

In April 2018, striking images of legendary musician and actor David Bowie cropped up throughout the Broadway-Lafayette subway station in Soho, where commuters bustle between the B, D, F, M, and 6 lines. 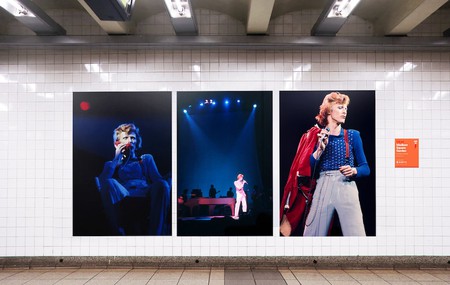 Music streaming service Spotify is behind this monumental takeover in partnership with the Brooklyn Museum, where a landmark retrospective of Bowie’s unparalleled influence on the spheres of music and fashion is currently on view. Titled David Bowie is, the exhibition displays some 400 objects from the Starman’s career and personal estate, including photographs, costumes, and lyric sheets.

Below street level, portraits of Bowie feature on the Broadway-Lafayette station’s walls, while renderings of his face come into focus across platform beams. The advertisements include banners featuring his quotes, as well as fan art and maps marking his old New York City haunts. 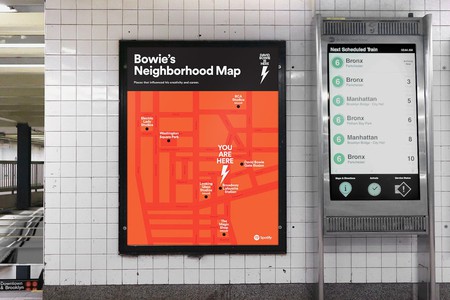 “The intricate details that make up the subway takeover speak to key moments in Bowie’s New York City history, many of which were in the neighborhood surrounding Broadway-Lafayette, where he spent over two decades,” according to Spotify. “From legendary concerts at Carnegie Hall to recording sessions at studios like Electric Lady and the Magic Shop, the takeover beautifully explores how the city impacted the artist, and speaks to visitors about the truly unforgettable mark of New Yorker David Bowie.”

Limited edition MetroCards, titled “Tickets to Mars” and which double as free tickets to the Brooklyn Museum’s exhibition, are dispensed at random. According to Spotify, each keepsake ticket will display one of five Bowie personas—Ziggy Stardust, Aladdin Sane, and Thin White Duke included. 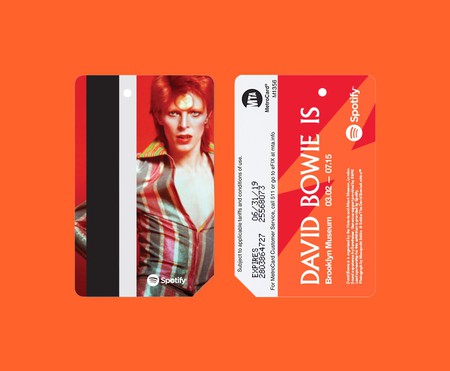 Meanwhile, above ground, life-sized cardboard cutouts of Bowie, set to the scenic backdrop of Times Square, the Washington Square Monument, and beyond make for ideal Instagram fodder.

“Beyond the physical subway takeover, Spotify’s multimedia format, Spotlight, will further extend the everlasting magic of Bowie with the introduction of a new series, David Bowie Stories,” informs Spotify. “This series will give fans an even deeper look into the life of the musical icon with content including anecdotes, tall tales, origin stories, making-ofs, mini-essays and more, paired with photos, video, and items from the David Bowie Archive.” 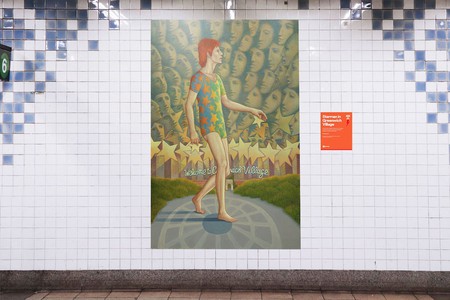 The Starman | Courtesy of Spotify

A Londoner by birth and an English icon by right, David Bowie was also an honorary New Yorker. The larger-than-life performer spent some 20 years living in Soho, and his memory is deeply interwoven into the fabric of New York City.

Visitors can contribute to the David Bowie universe by posting their photos of the immersive experience with the hashtag #DavidBowieIsHere.

David Bowie Subway Takeover will remain on view throughout the Broadway-Lafayette subway station until Sunday, May 13, 2018.