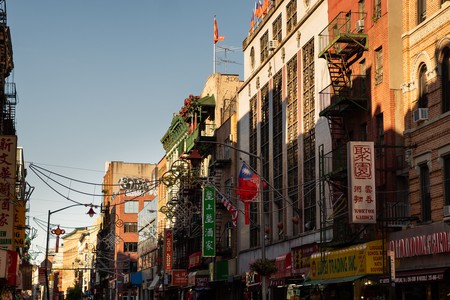 Alice Liu is the young manager of a family-owned tea shop – Grand Tea and Imports – in Manhattan’s Chinatown. She describes the changing face of the New York neighborhood, and how the people of Chinatown work to keep its culture alive despite commercialization and hiking rents.

Seeking refuge, prosperity or both, the Chinese diaspora has travelled through the world in the past 500 years, establishing urban enclaves that we now call Chinatowns. Instead of carefully guarded cultural islands, Chinatowns today are transient spaces that reflect the wider conditions of their surrounding environments. These are grounds of contention as different generations, social strata and ethnic groups negotiate diverse outlooks for the future.

Going beyond dragon-emblazoned archways and New Year’s parades, we zoom in on the Chinatowns of New York City and London. Despite the difference in size, these hubs at the heart of New York’s and London’s Chinese communities are united by their importance to the cultural fabric of each city. We speak to long-standing members of both communities – the young manager of a family-owned tea shop on Manhattan’s Grand Street, and the father-daughter duo behind one of London’s longest-running Chinese supermarkets – about the Chinatown they know, its legacy and transformation. 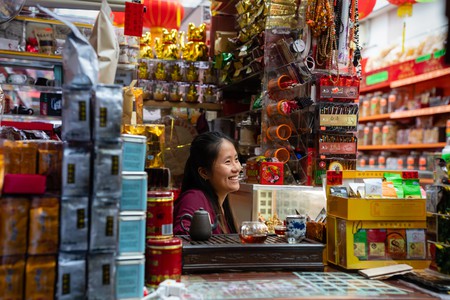 I was born in New York Downtown Hospital, right outside Chinatown. I’ve lived in the same apartment since I was one, right across the street from a Chinese Buddhist temple as well as a Jewish synagogue. The Chinatown I remember had a lot of seamstress factories all along Eldridge and Division streets. All the ladies – aunties, mothers, young and old immigrants – worked in these factories. The obligatory female job was a seamstress, and the obligatory male job was cook. So my dad was a cook, my mother was a seamstress. We were the stereotypical Chinatown family.

My dad opened a tea store for three main reasons. Before he came to America [in the 1980s], my family made their own tea. My dad’s from Taishan, which is known for at least three major teas: Taishanese cloud and mist tea, Taishanese wild grown tea and Taishanese black tea. 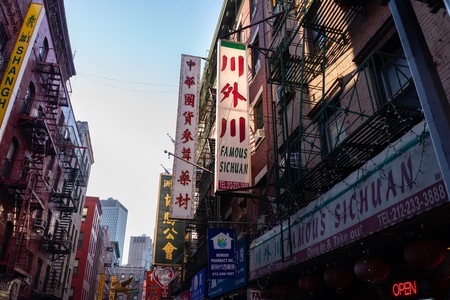 Second, he was really upset that tea wasn’t well represented in Chinatown. The majority of it was free tea served in restaurants. People do wedding ceremonies with tea, it’s in all the important moments of our lives, yet we celebrate it with such low-quality tea. It would be like meeting friends for a special dinner and taking out $1 wine.

Back then there really wasn’t a culture of drinking tea. So it was very hard for my family to educate people about why they should pay $45 for a pound of tea when it’s given so liberally in dim sum restaurants. It came down to educating the uncles, grandpas and aunties.

My dad made a makeshift yellow cart to hold different types of tea, which he would push around dim sum restaurants. As people ordered plates of dim sum, he would tell them, “Oh, you can have better-quality tea than what the restaurant is selling.” He did it at Golden Unicorn and Jing Fong from 2006 to 2009. 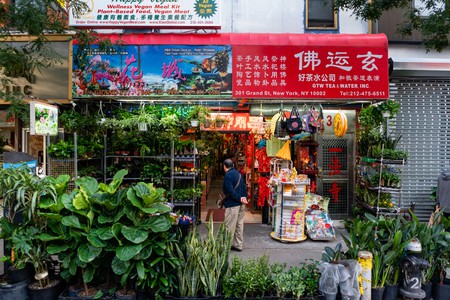 Third, it was a vehicle for him to make sure we stayed rooted to our culture. He was worried that we would become the stereotypical ABC [American-born Chinese] kids who have strained relationships with their parents. He wanted us to feel like we have a community that we belonged to before New York.

There’s always been the stigma that if you stay in Chinatown, you’re a deadbeat. Everyone works so hard to get a white-collar job, buy a house in the suburbs and move out. Chinatown was considered the enclave for people who had just arrived.

I’ve seen so many of my dad’s friends close up shop. They raised their families making a living through these small businesses, but their children have no interest in taking over. There are jewellery or gift shops, so many restaurants. Buddhist-goods stores – I could count on one hand how many are left. 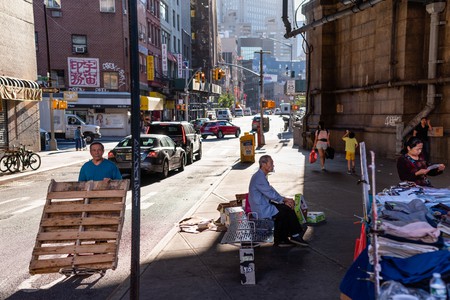 We’re very involved with [community organization] Think!Chinatown, where I helped develop programming about the Dragon Boat Festival. We had a herbal-tea event where we taught people about 24-flavor tea, five-flower tea. We created a joong-making [glutinous rice dumplings] event. There’s this interest for people, especially among my generation, who want to reconnect but were never given the opportunity, or their parents never taught them.

With Think!Chinatown and other small local businesses, we also developed a project called How To Chinatown. It’s a page that’s created to mimic Yelp because we feel like Yelp isn’t an authentic representation of Chinatown. Pearl River Mart, for example, has so much more than their qipao dresses. They sell a showroom full of antique Chinese goods. There are other, lesser-known ones, who craft their own peanut brittle and mooncakes. Or my family’s store, which has been selling tea for 13 years now. 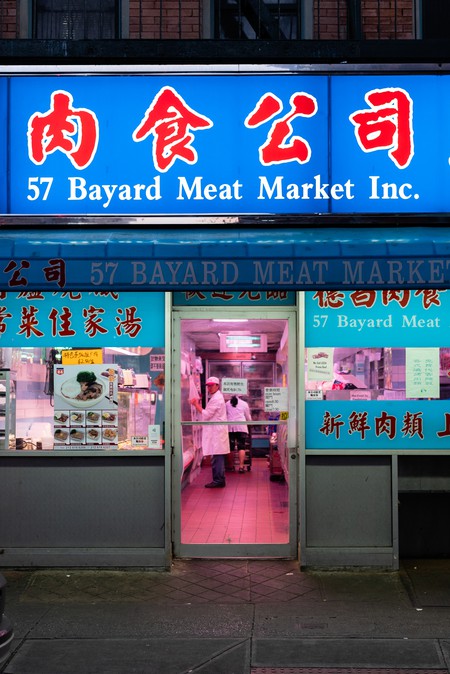 We’re the last piece of land [below] 14th Street that hasn’t been really commercialized. And so everyone has their eyes on Chinatown. We already lack representation in government, but also we’re immigrants and a lot of us don’t know English. Unfortunately there’s a lot of Mott and Mulberry [streets] that Chinese people don’t even live on anymore. They look like super old buildings, but they’ve been gutted out. A lot of the new yuppies live there now.

With Chinatown businesses, rent has become so unaffordable that we’ve had to figure out creative ways to make it work. We sublease [part of a store] from Wah Fung, the herb shop. And then we sublet part of our [space] to a Chinese herbalist. And then upstairs to an artist.

That’s why it’s so important to preserve these businesses. A lot of Chinatown’s culture and Chinese culture is found in the stores. What started off as business owners trying to make a living has become a day-to-day practice of what is culture. But it could easily become entrapped in a museum and become history. Creating these services for people to come and continue these practices every single day, that’s our way of keeping this culture alive, and keeping Chinatown alive. 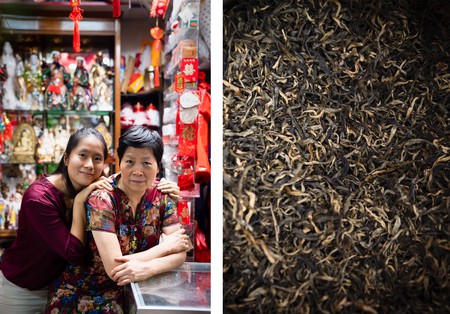 This is an old tofu shop on Division Street I grew up going to. That place makes its own tofu pudding, makes its own soy milk. It closed down for a little bit, but now the younger generation is trying to open it again. It’s been completely revamped. I have very vivid memories of me and my grandma picking up oilcans and then going to sell them to that tofu shop because they would reuse them to pack their tofu for restaurants. With the money we got from selling those oilcans, we’d spend it on tofu pudding at that same store.

Christina Seid – I love the girl. You can’t replace Chinatown Ice Cream Factory. First of all, she’s an icon in Chinatown. And second of all, they’ve been here forever. They have history. Her dad was an owner before her.

There are very few community spaces for residents and tourists to interact in. In Roosevelt Park, you’ve got aunties doing tai chi and square dancing in the mornings and evenings; you see kids playing soccer and hanging out the rest of the day. Go to Columbus Park and you see uncles playing the yiwu while the aunties are singing Chinese opera.

Wing On Wo and Co

Aside from its cultural goods and pottery, their work with the W.O.W. Project is so important to the community. Wing On Wo is a community space for local artists, residents and business owners. They have a storefront residency program, so local artists can participate. It’s art – but not art that belongs on a white wall in a museum. It’s something that’s living and breathing, and it has a real functionality. I think that’s genius.

For cultural goods, go to Eastern Book Store. They’ve been here for so long. They’re a bookstore, but they also sell everything from art supplies to little cultural items that are made by local artists.

It makes its own egg rolls and its own sesame peanut brittle. Relatively new, but the couple who own it, Gary and Crystal, they’re from Hong Kong. And just a nice couple, kind people.

These are the popular destinations for dry goods. Everything from ginseng, scallops, sea cucumbers, starfish, deer tails… all that stuff.