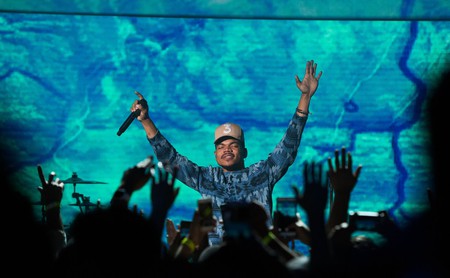 Teaming up with rising R&B artist Daniel Caesar, Chance The Rapper performed a new song on Monday’s The Late Show With Stephen Colbert.

Sitting down with Colbert, Chance discusses his reaction to fans’ calls for him to be the next mayor of Chicago, his dislike of politics, his youth empowerment non-profit Social Works, and going to church. At the very end of the conversation, Chance explains why he chose to perform an untitled track he wrote two days prior to the show’s recording.

“Basically — you know this, I feel like I can say this on TV — I was supposed to come and perform, and I was going to do ‘Grown Ass Kid,’ which is an unreleased song from Coloring Book,” Chance says. “Then, I called you guys on Saturday and said I can’t do ‘Grown Ass Kid’ anymore for reasons I really don’t want to talk about, but we had to come up with a song in a matter of days, and I wanted to do something fresh. Not to lie, I’ve been in the studio a lot lately cooking up some yammers — they’re honestly great — and, you know, I premiered ‘Angels,’ that was the first new song of Coloring Book, I did that here, so I was like, why not do a new song here for you guys tonight.”

Parts Acid Rap, parts Coloring Book, the song starts off small, soft raps tip-toeing over Caesar’s soothing strums. At moments, Chance stumbles on his words, further empowering personal spillings like,”I really need a break, could really use a nap/My daughter barely recognize me when I lose the hat/You go so far, you hit a point where you can’t Uber back,” and, “I think my little cousins want their cousin back / The automatic quarterback that doesn’t rap … It ain’t really fun to hang out with me no more / We can’t go to River East to hang at the beach no more.”

In the third verse, Chance opens up a little wider, looking at the struggles of achieving the American dream:

By the final chorus, Chance, Caesar, and the backing band are in full gospel mode, illuminated in radiating, white light. Somehow, through all of it, you realize Chance is tired, sad, frustrated, and angry, but still hopeful. As Colbert comments overtop of the crowd’s cheers, “That had life.”

Watch the performance and interview below.