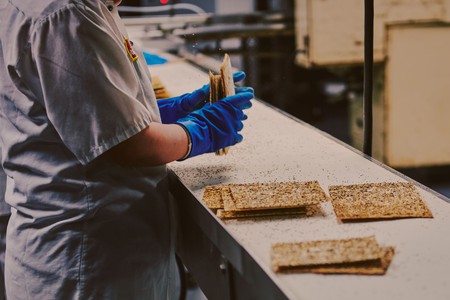 Year after year, the matzo eaten during Passover is often tasteless and synonymous with cardboard. But one artisanal Brooklyn company is on a mission to make matzo so good, you’ll eat it year-round.

Food entrepreneurs Kevin Rodriguez and Ashley Albert are among the high percentage of Jews who are tired of the bland matzo that’s traditionally served during the eight days of Passover. Matzo – crackly, unleavened flatbread that replaces leavened products like bread and pasta – is consumed in bulk over Passover as a way to tangibly pay homage to the Jewish slaves who escaped Egypt with only unleavened bread. 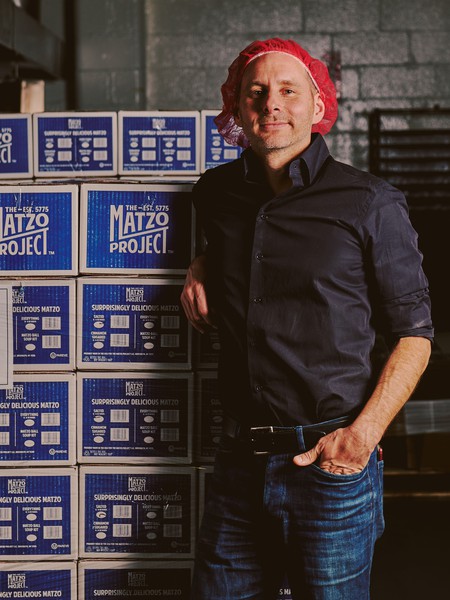 During the holiday, grocery stores are bursting with matzo, boasting stocked shelves of Manischewitz – and Streit’s – boxes of matzo, jammed with flaky sheaths of unsalted crackers. And every year, Jews complain about the sad, stale flatbread, furiously rubbing salted butter on pieces of matzo in a fruitless attempt to mitigate its joyless flavor.

But The Matzo Project hopes to challenge matzo’s long-standing title of “bread of affliction.” Albert and Rodriguez, who met as kids at summer camp, didn’t have any experience in the food world prior to creating The Matzo Project. Albert had previously founded a few projects including The Royal Palms Shuffleboard Club in Gowanus, Brooklyn, and Rodriguez had been looking to make a career change when he first approached Albert with a few ideas for a food company. One of those ideas morphed into The Matzo Project: an edible and actually craveable matzo, one that could disrupt a stagnant facet of the food world. 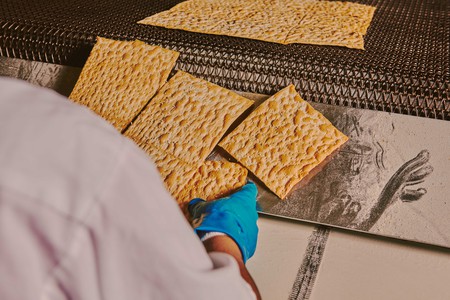 The crispy cracker has long remained something consumed only by Jews, but The Matzo Project is hoping to change that | © Louise Palmberg / Culture Trip

“[Matzo’s] remained safely tucked away in the kosher aisle,” Rodriguez says. “No one has ever tried to bring it to a larger audience of people.”

The Matzo Project’s matzo is kosher, meaning it satisfies the requirements of Jewish law, but it doesn’t meet the more stringent requirements to be kosher for Passover – and that’s a decision Albert and Rodriguez consciously made. (For religious Jews, there are restrictions on what can be eaten over the holiday: no chickpeas, flour, corn or rice.) Yes, The Matzo Project’s matzo is made in a kosher facility, but it hasn’t been certified as kosher for Passover by a Jewish certifying agency – as traditional matzo has. 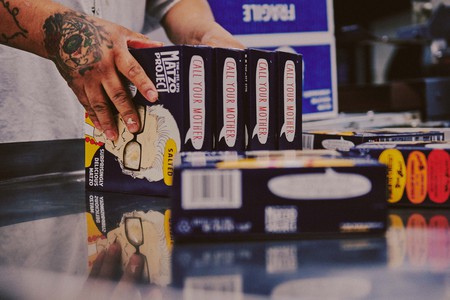 The matzo is baked in a facility in Sunset Park, Brooklyn. Here, they create a dough from flour, water, sunflower oil and sea salt, which can sit out for no longer than 18 minutes (the idea is that you don’t want the yeast to activate and have time to rise) before it’s pressed through a sheeter, showered with sea salt and shuttled into a tunnel oven. The final result is a crispy, salty cracker, shaped like a rectangle and tinged with dark brown spots (called toast points).

“It’s a simple product, and it still feels so complicated,” Albert says. “It’s more challenging to try to make something exceptional from something so simple. Anybody can throw a bunch of butter and sugar into something and it’s going to taste good, but to be able to make something that’s just that simple but has an elegant deliciousness is hard to achieve.” 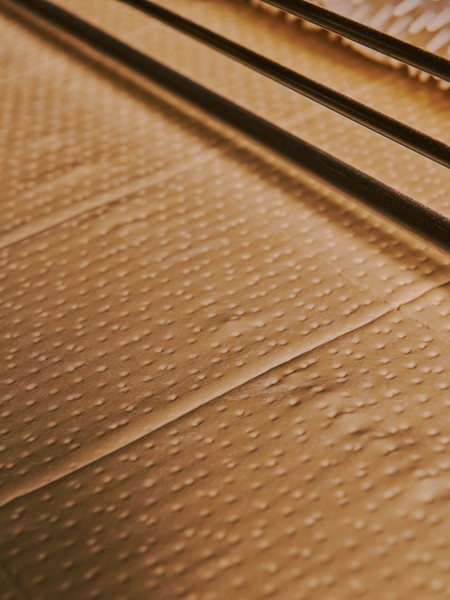 In addition to the sheets of matzo, The Matzo Project also makes matzo chips: paper-thin diamond crackers sprinkled with sea salt or doused with cinnamon sugar or a spicy everything-concoction peppered with sesame and paprika. The blue bags sit in the same aisle as your other favorite chips and crackers and can be purchased in a handful of specialty grocery stores; one large bag rings in at $4.95.

The pair hopes that their matzo will become as ubiquitous in people’s homes as pita chips or butter crackers – an equally perfect vehicle for guacamole or hummus or hunks of cheese.

“We grew up on matzo, and it definitely has its place. We’re not trying to supplant that matzo,” Albert explains. “We want to be the matzo you eat the other 51 weeks of the year.” 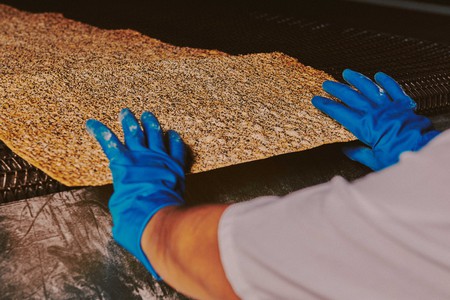 Some matzo sheets are topped with an everything spice, peppered with paprika, sesame, dried onion and garlic | © Louise Palmberg / Culture Trip

To do that, Albert and Rodriguez aren’t just targeting Jews – in fact, they’ve found that Jews are often the hardest people to convince to eat matzo outside of Passover. Instead, people who didn’t grow up celebrating Passover seem to be more receptive to trying something new.

“We’re not just rethinking the item,” Rodriguez says, “we’re rethinking who this item can be for. [We’re] trying to bring something that’s culturally ours to share.” 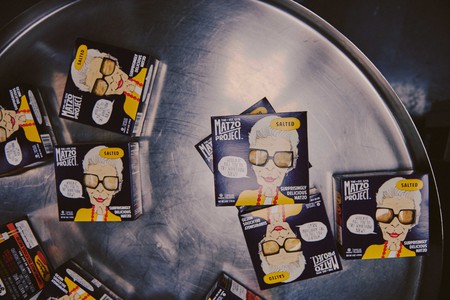 Although the inspiration for the grandma illustration stemmed from Jewish stereotypes, everyone can relate to a spunky grandmother | © Louise Palmberg / Culture Trip

Each bag and box of matzo is affixed with an illustration of a grandmother, her lips painted red and her hair a flash of white. A speech bubble propped to her side has her asking, “Would it kill you to try something new?” A string of red beads graces her neck, and her glasses are translucent, a gateway to the brown-marbled matzo.

“[The clear glasses] make her completely ethnically ambiguous,” Albert says, “where people would [say] that is my Jamaican grandma, or that is my Korean grandma. We thought it would be an inside Jewish-grandma joke, but apparently there’s a certain kind of sassy grandma that people relate to from all different cultures.” 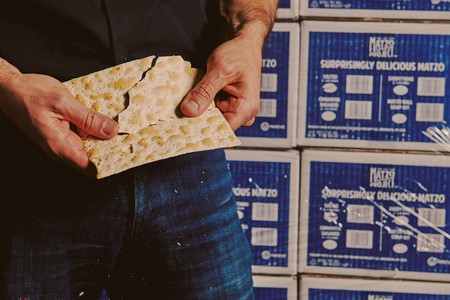 The matzo also comes in bite-size chip format, perfect for dunking into hummus or topping with slices of cheese | © Louise Palmberg / Culture Trip

Along with the matzo and matzo crackers, The Matzo Project also produces a matzo-ball-soup kit and chocolate matzo ungapotchkies: clusters of dark and milk chocolate swirled with toasted rice, toffee, peanuts (only with milk chocolate) and coconut (only with dark chocolate).

“If people are eating the food of another culture, it’s just that much harder to stereotype and lump people together,” Rodriguez says. “It brings people together. If we can share our culture and make people feel like there’s less of a separation, that’s an honor.” 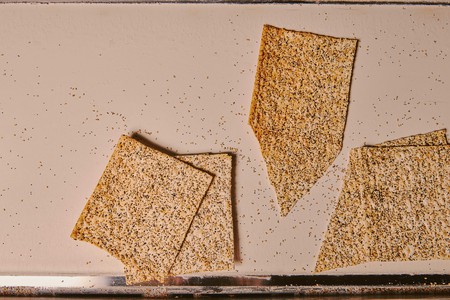 Albert and Rodriguez hope that the matzo will be something people eat year-round, not just over Passover | © Louise Palmberg / Culture Trip
Give us feedback