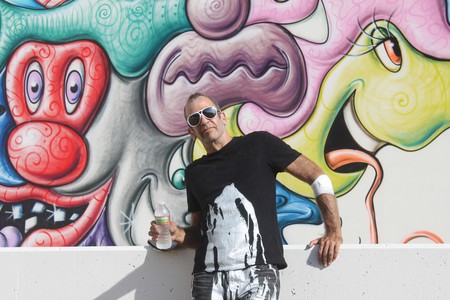 Brooklyn-based artist Kenny Scharf has been working to challenge our understanding of ‘fine’ art for over four decades. He uses many different types of media, from garbage to blank canvases, and his work has received acclaim across the world. Scharf has made a significant contribution to the art world by showcasing his ability to alter our conceptions of the craft. We find out more.

Kenny Scharf was born in Los Angeles, California in 1958, and received his B.F.A. from the School of Visual Arts in New York in 1980. His work reflects a desire to break away from the confines of traditional classic art, drawn by the desire to challenge what we think defines ‘fine art.’ His aesthetic merges a unique combination of pop art and science fiction, plus a lot of color. 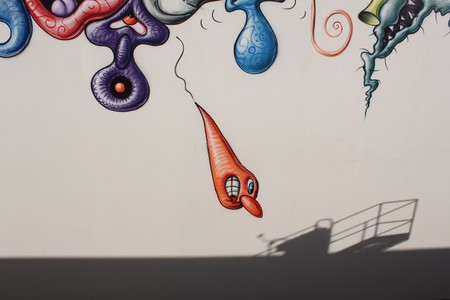 His artistic reach is nearly limitless; one of his most unusual works was the ‘Lixo’ project (lixo means ‘trash’ in Portuguese). In the early 1990s, Scharf traveled to the beaches of Brazil, collecting discarded items that he subsequently fused together. He brilliantly transformed these masses of refuse into a beautifully colorful work, operating via the concept that every discarded item possesses a unique concept and story and has the ability to become something both beautiful and meaningful.

His murals have made their way across the world, and travelers can appreciate the bright, unique faces of his murals. His first mural in New York City was titled ‘Judy’ (1981) and featured an image of Judy from The Jetsons. This mural is technically and aesthetically simpler than his later pieces and was completed only with red spray paint. Later murals, spreading from the United States to Brazil and Spain, feature brightly-colored faces in different shapes, colors, and sizes, with a vast array of expressions. Many of his figures look like aliens, with rather inhuman body shapes and abnormal proportions. 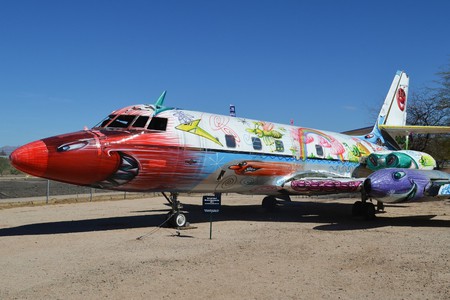 Scharf’s paintings have similar themes to his other works, like bright colors and distorted figures. His paintings’ inhabitants appear surreal amidst floating donuts, turtles traveling on turtleback, and floating mouths eating hot dogs. These works reject the classic concept of fine art in innovative ways and give us a peek inside the fluid imagination of the artist. 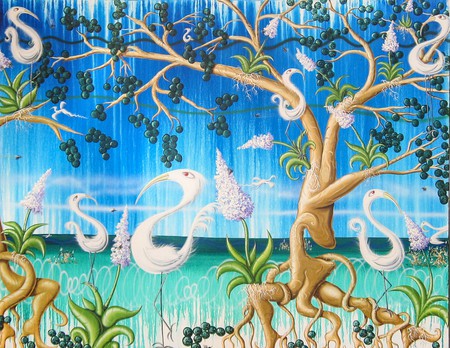 Kenny Scharf has been exhibited in museums and galleries across the world from Switzerland to Mexico, Hungary, Japan, and Italy. In New York, Kenny Scharf’s work is a central focus at The Rose Bar in the Gramercy Park Hotel. Inside, you can find a sculpture of a red figure atop the fireplace mantel and Scharf’s paintings on the walls.

His artwork is also exhibited in the Eric Firestone Gallery in East Hampton. One particularly expressive work is Nemosenemy, which depicts an average underwater view with a giant alien-like creature disturbing the tranquility of the piece. With his curly antennae, long green tongue, and a body that oozes onto the frame itself, this painting is representative of Scharf’s desire to challenge fine art concepts and break the physical barriers of works that stay neatly within the confines of their frame. 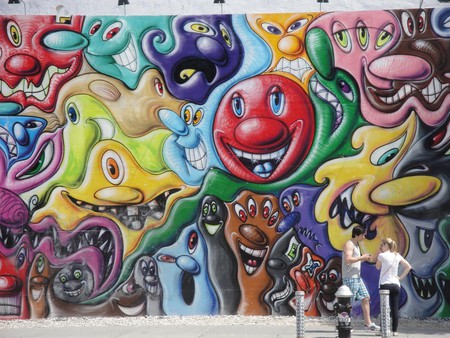