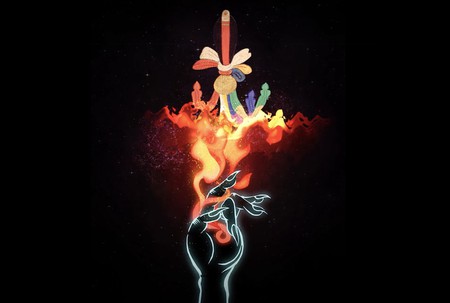 Chitra Ganesh, still from the digital animation 'The Messenger,' 2018 | Image courtesy of the artist.

Having spent her time between New York City and India, Ganesh’s oeuvre is a dazzling amalgamation of ancient iconography, progressive ideology, and contemporary art forms.

At the Rubin Museum of Art in New York City, five of Ganesh’s animated “interventions,” developed with and animated by the Studio NYC, alight with the motion of a passerby. Vivid colors and exquisite scenes transport viewers to faraway landscapes and ethereal galaxies. The Scorpion Gesture, named after the mudra (a traditional South Asian hand gesture) “said to have unlimited power and potential for transformation,” is one of her most recent ventures.

“The aspects of my practice, with deep roots in Hinduism and Buddhism, come less from a spiritual point of view and more from a visual culture that is widespread throughout South Asia,” Ganesh told Culture Trip. “The multi-limbed figure, for example, and my interest in classics and folklore—like Virgil’s Aeneid and Lewis Carroll’s Through the Looking Glass—combine with my fascination with the graphics of Bollywood posters, which in the ’70s and ’80s were hand-painted and often collaged. Those aesthetics are important to my work, alongside the quality and character of the walls on which graffiti was written in New York City.”

Born and raised in New York, Ganesh’s practice is undoubtedly influenced by the history and culture of her home town. With multiple art forms at her disposal, Ganesh lets the theme and location of a piece guide the materials and the medium she chooses; though some of her artistic direction evolved circumstantially.

“My desire to push my own visual vocabulary coincided with September 11th and not being able to get to my studio for a year,” Ganesh recalled. During her time as a graduate student at Columbia University, the artist lived in Williamsburg while her studio was in Harlem, meaning her commute involved a lot of travel on a subway system that was significantly impaired. 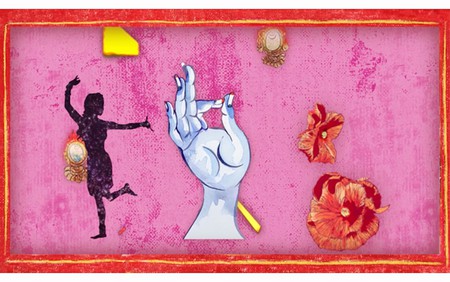 Chitra Ganesh, still from the digital animation ‘Adventures of the White Beryl,’ 2018 | Image courtesy of the artist.

“In the months that followed [9/11], as the city was recovering, it took [considerable time] for the subways to begin functioning normally again,” Ganesh continued. “So I did a lot of drawing on my kitchen table. From there, I started to experiment with scale—small drawings became 20-foot murals. And that practice of wall drawing was a great way to think about other visual art forms like graffiti, murals, and street art. But it was also a way of working out ideas around figuration and scale without always having access to a studio, which is a common predicament for young artists living in New York.”

Over time, Ganesh developed a unique practice informed by comics and sci-fi, street art, traditions and subcultures. Her rich and layered imagery consistently borrows from traditional Buddhist and Hindu aesthetics, but the women whom she situates within her practice also serve to contradict the male-centric conventions that are dominant in South Asian art. 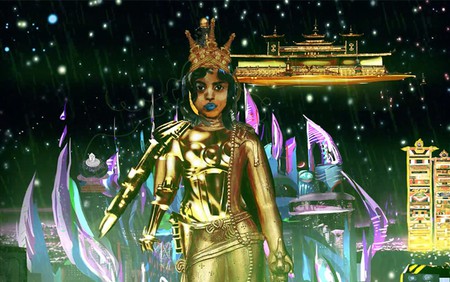 Chitra Ganesh, still from the digital animation ‘Metropolis,’ 2018 | Image courtesy of the artist.

“I started to rethink the way that female characters in folklore are represented,” Ganesh recalled, and she has since devoted much of her practice to ensuring the visibility of women—South Asian women more specifically, whose narratives are rarely acknowledged.

Ganesh’s desire to elevate her female subjects is directly linked to her penchant for reimagining old art forms with an eye for the contemporary. A skilled draughtswoman, painter, video artist, and photographer, Ganesh presents tradition in new media and, in doing so, she not only carries this cultural conversation forward, but also broadens the expanse of her audience’s often narrow understanding of South Asian art.

In 2014, Ganesh’s solo show at the Brooklyn Museum, Chitra Ganesh: Eyes of Time, traced the artist’s long-standing thematic influences, including “femininity, empowerment, and multiplicity… [as well as] the Museum’s encyclopedic collection, including representations of the goddess Kali, to create a site-specific multimedia installation for the Herstory Gallery,” as explained by the museum’s website.

The Scorpion Gesture also incorporates Ganesh’s fascination with Kali; namely, her place in folklore as a divine goddess, the mother of the universe, and the destroyer of evil forces. At the Rubin, Ganesh’s interventions employ contemporary imagery to communicate similar time-tested messages.

“The Rubin Museum invited me to engage with their 2018 theme of ‘the future’ by using the figure of Padmasambhava, also known as the Second Buddha, as the point of departure,” Ganesh explained. “What’s interesting about his character is the story of how Buddhism was brought from India to Tibet. Part of his story includes ‘treasure teachings’ that are revealed in time.” 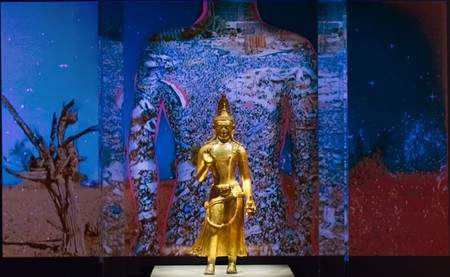 Chitra Ganesh, still from the digital animation ‘Silhouette in the Graveyard,’ 2018, behind ‘The One of Loving Kindness Maitreya,’ Mongolia, late 18th–early 19th century | Digital still courtesy of Chitra Ganesh/collection object image courtesy of the Rubin Museum of Art.

An omnipotent figure with the power of foresight, Padmasambhava is believed to have hid his “treasure teachings” in the way of thoughts, objects, and revelations at various points in the future for his reincarnated disciples to discover in due time. Through the centuries, these teachings became manifest, and were transcribed and transmitted through the ages. This year, the Rubin Museum honors Padmasambhava’s timeless principles with a cohesive program of exhibitions and events commenting on and celebrating the future.

“When people think about Asian art… it’s [usually] associated with the past and with tradition,” Ganesh explained. “In American museums, there is often a huge gap in terms of what gets exhibited from other places. My interest is in making connections—of presenting a more contemporary way of understanding these influences in art.” 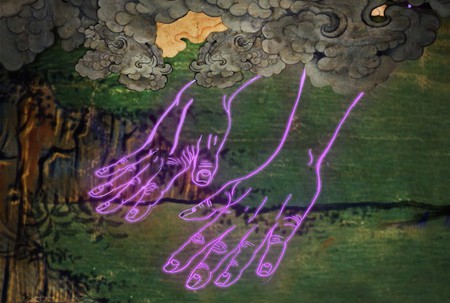 Chitra Ganesh, still from the digital animation ‘The Messenger,’ 2018 | Image courtesy of the artist.

Animation, Ganesh says, has been one of the most effective ways to engage unfamiliar audiences with the myths and aesthetics of South Asian culture and history.

“An essential part of my practice involves storytelling, and animation has been a really wonderful way to take a deeper dive into narration because it’s time-based,” she explained. “There’s a lot of futuristic, transformative, shape-shifting character to my work—surrealism and comic book culture as well—and I felt like animation was the perfect way to crystalize these ideas so that they could unfold over time.”

Ganesh has created what she called in an interview with the Rubin Museum, “an entry point [for] people [and] audiences who might not feel like they have an intellectual or art historical connection to the work.” Through the creation of a new visual universe, Ganesh has earned international recognition by giving underrepresented women, otherwise omitted from the spheres of art and literature, a platform that is long overdue. 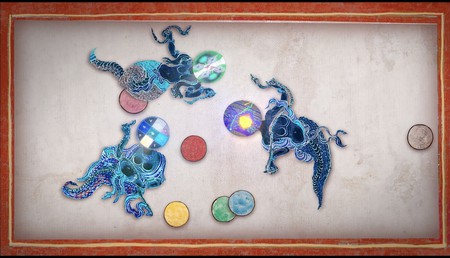 Chitra Ganesh, still from the digital animation ‘Adventures of the White Beryl,’ 2018 | Image courtesy of the artist.

Ganesh’s work is also exhibited at the Kochi-Muziris Biennale, an exhibition of contemporary art in Kochi, India, through March 2019, and, come September 2018, The Kitchen in New York City will unveil a solo show of her work, “the anchor of which,” she says, “is a science fiction story from Bengal.”