Bringing Morocco's Trance-Inducing Gnawa Music to Brooklyn and Beyond 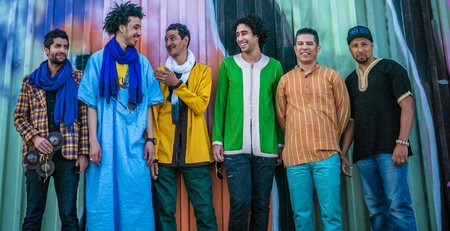 In this series, Culture Trip explores the various pockets of culture that help make the New York City music scene so vibrantly singular. In this installment we speak with the Brooklyn-based outfit Innov Gnawa to discuss the group’s dedication to their home nation’s traditional style of music, how leaving Morocco is what really brought the band together, and how their recent Grammy nomination is a sign that new doors are opening in the U.S. for unfamiliar sounds.

CT: Can you briefly explain Gnawa music for our readers?

Innov Gnawa: Gnawa, beyond a music, is a brotherhood that has been present in Moroccan communities for several centuries now. Making its way to Morocco through the trans-Saharan slave trade, the music brought with it the rich and complex West African universe. Using enchanting blues-like melodies and complex polyrhythms, the initiated can get into a trance while attending long-night rituals called “lilas” in order to heal their spirit from physical and/or mental pain. The Maalem (master) plays a three-stringed instrument called sintir and his Koyos (accompanying musicians) play the qraqeb (metal castanets) and sing in a call-and-response fashion.

CT: How did you all end up meeting in New York and what was the impetus that led to the formation of Innov Gnawa?

IG: One thing for sure is that we would have never met if we all stayed back home; each member being from a different city in Morocco. There was a place in Williamsburg called Zebulon that hosted a variety of great music acts and we would gather there in the very beginning and play Gnawa music. Over time, the strong urge to create a Gnawa band in North America, along with New York’s never-ending thirst for diversity and Samir LanGus moving to NYC made it possible to officially create Innov Gnawa.

CT: What are five of your favorite things about Brooklyn, music or non-music related?

CT: How has being a part of Innov Gnawa created a bridge between your lives and cultures as Moroccans and New Yorkers?

IG: The magic of New York is its richness and diversity. New Yorkers don’t get jaded with all the different cultures and languages they are exposed to on a daily basis. Instead, it makes them more thirsty and more curious.

CT: How have you all approached the challenge of bringing Gnawa music to a New York/U.S. audience when it is so largely unheard by many here?

IG: We have been blessed with amazing audiences all over the east coast. Bringing this music to cultural centers or to your local dive bar has never presented a challenge. We are very grateful for that.

CT: Looking at collaborations, like on Bonobo’s “Bambro Koyo Ganda,” and just the every day of being part of New York’s vibrant music scene, how has this impacted your approach to your music? Do you intend to branch out beyond “traditional” Gnawa music and employ more stylistic components or stay true to your roots?

IG: Being musicians in New York reminds you that music has no borders or limits. However, we intend to preserve the traditional aspects of Gnawa in order to share it with more generations to come all over the globe. That being said, we are not opposed to exploring new ideas and collaborating more with great artists.

CT: Who are some other Gnawa or Moroccan artists that people outside of the culture should be listening to if they enjoy your music?

IG: There are so many Gnawa artists recording nowadays and there are a lot of available recordings and videos available online. Since we value the tradition so much, we would recommend listening to the greats such as Maalem Sam, Maalem Hmida Boussou, and Maalem Mahmoud Guinia. Other great Maalems that are still among us would include Maalem Mustafa Bakbou, Maalem Hamid El Kasri, and Maalem Abdelkebir Merchane. In addition, Morocco has a very rich musical palette and has a lot to offer to the listener.

CT: How does it feel to have received a Grammy nomination, considering the ceremony’s long-standing historical issues with branching out beyond white artists?

IG: We are so grateful that the Recording Academy is finally considering music from different parts of the world and sung in a different language. Just being nominated is a huge recognition on its own.

CT: What can fans and new listeners expect from Innov Gnawa in 2018?

IG: We will be releasing a new LP entitled Aicha in the early part of 2018 and we hope our fans enjoy it as we have explored some new territory in this record. Besides that, we will be keeping Gnawa music alive in New York. Saha Koyo.