The Best Hotels to Book in SoHo, NYC 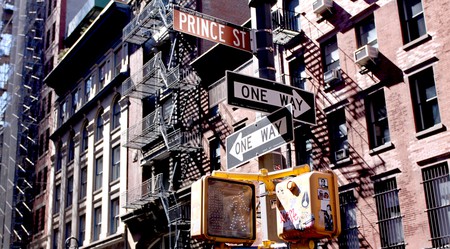 From art to shopping, you can have it all with a stay in SoHo, New York City | © Mark Henderson / Alamy Stock Photo

Visitors from all over the world are drawn to SoHo, Manhattan’s shopping capital. Home to world-famous fashion brands and trendy eateries and bars, the neighborhood has almost become synonymous with luxury. However, that doesn’t mean there isn’t something for every budget. From budget “micro-rooms” that make space-saving an art form to splurge-worthy design abodes, here are some of the best hotels in SoHo, now bookable through Culture Trip.

SoHo is a veritable cornucopia of everything that makes New York City so great. The area’s soaring popularity has led to skyscraping rent for indie boutiques and galleries, and so many of the decades-old art spaces have had to move farther out of the city. But enough of them remain to keep SoHo at the top of mind when it comes to contemporary art in New York. With so much to offer, it’s no surprise that trendy hotels have cropped up by the masses. Stay in one of the area’s best with Culture Trip’s pick below. 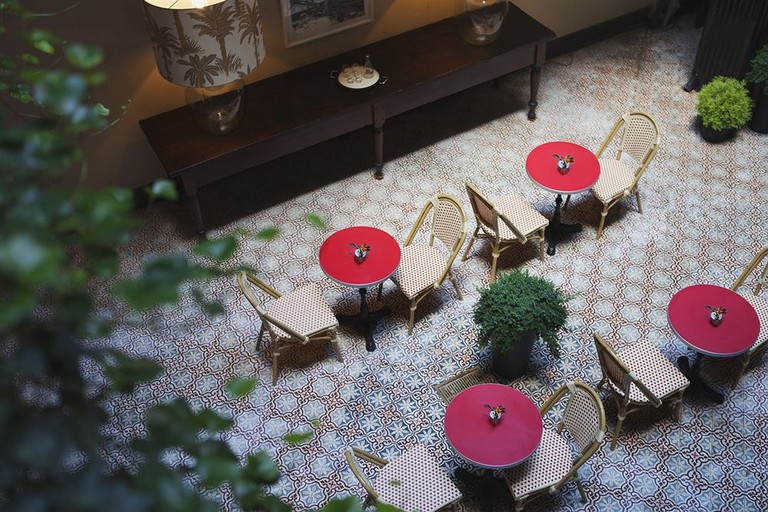 The Broome’s low rates make it an ideal choice for travelers looking for a stay that’s both stylish and budget-friendly. Dating back to 1825, the building stands out among the neighboring skyscrapers with its old-world exterior. Inside, you’ll find a Moroccan-tiled courtyard and a private art collection that comprises original pieces by Jean-Michel Basquiat and Keith Haring. The complimentary farm-to-table breakfast in the cafe may transport you, even if just momentarily, to the cobblestoned streets of Paris, providing much-needed energy for the day ahead. 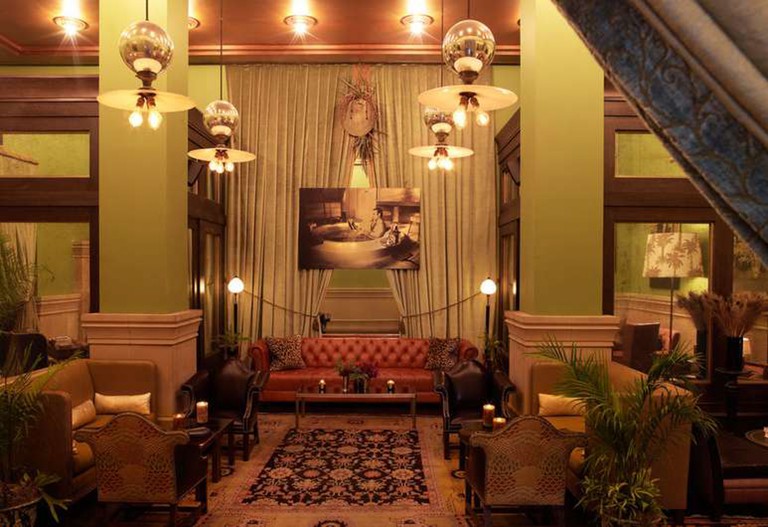 Courtesy of Soho Grand Hotel / Hotels.com
The Soho Grand Hotel pays homage to New York’s industrial and Pop-art-focused 1970s era, while still finding room for a dose of 19th-century glamour. This translates to plush velvet furnishings and gilded touches alongside hand-illustrated wallpaper and exposed brickwork. Even New Yorkers can’t resist the popular Grand Bar & Lounge downstairs. After rubbing elbows with regulars and sampling from a selection of 50 rare American whiskeys, head upstairs to your room, which features original photography from Manhattan’s Golden Era and subway-tiled bathrooms. These elements, plus spectacular views of downtown Manhattan, offer guests a taste of New York City as the locals know it. 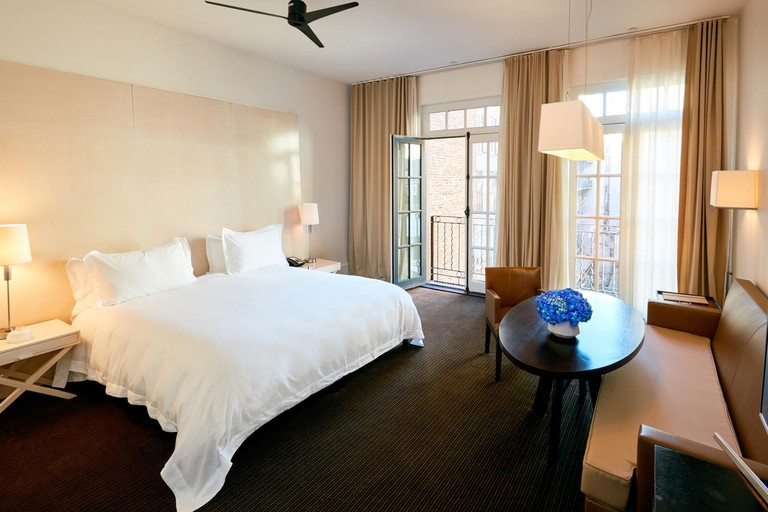 Courtesy of The Mercer / Booking.com

As the sister hotel to Los Angeles’s legendary Chateau Marmont, the Mercer specializes in Hollywood glamour with a New York twist. Housed in a landmark Romanesque Revival building, it has 75 rooms designed to offer guests an authentic taste of loft living. Expect airy suites with high ceilings, exposed-brick details and mahogany hardwood floors. The downstairs restaurant, the Mercer Kitchen, is helmed by renowned chef Jean-Georges Vongerichten and attracts some of the city’s trendiest residents, thanks to an innovative French-Asian fusion menu. 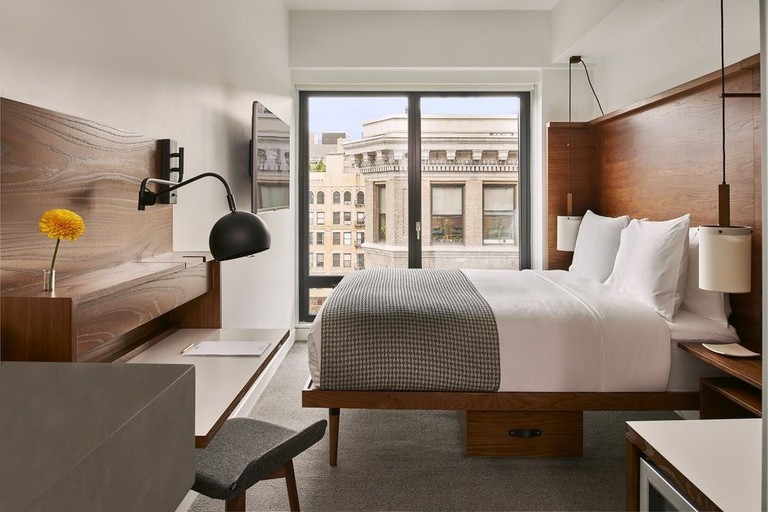 Arlo SoHo has all the airs, graces and trendiness you might expect from a boutique hotel but with comparably minute prices. Rooms are cozy and should win awards for their smart space maximization. Beds sit in wooden cubes, with hidden nooks and crannies below. Some come with spacious terraces, complete with an outdoor shower, and all feature excellent, quintessentially NYC views. The rooftop bar often runs seasonal pop-ups but has exceptional panoramas year-round, and if the midnight munchies hit, the 24-hour in-house store, Bodega, offers up a number of drinks and snacks. There is, however, ample dining on offer in the area. It’s worth making an excursion to nearby Dominique Ansel Bakery to try the original cronut – a donut made from flaky croissant pastry that’s twice as good as either sum of its parts. 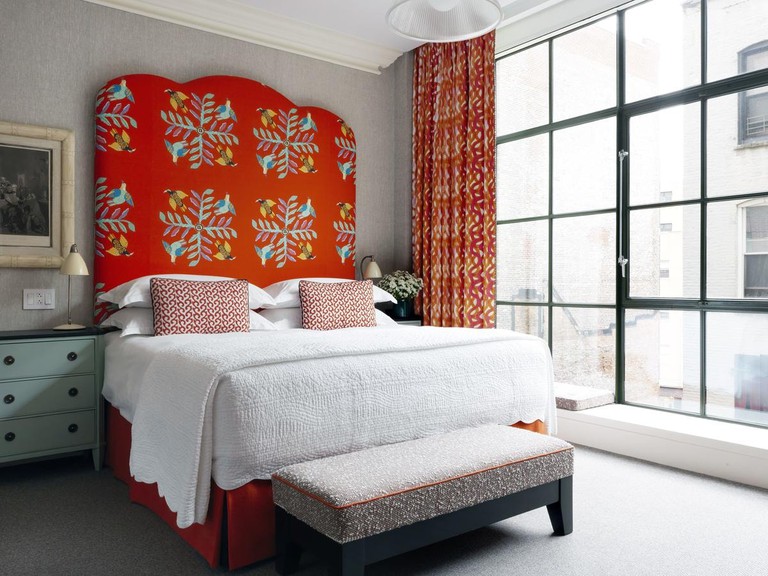 Crosby Street Hotel feels very countryside chic with its distinctive headboards, pinstripe walls and contrasting floral patterns. The overall effect of the Kit Kemp-styled hotel is a curiously kitsch space that feels incongruous and yet apt for its New York City location. Rooms are all unique and offer up innumerable interior design inspirations; you may find yourself coming home with a few plans to redecorate. As per the Kit Kemp standard, facilities are abundant. Indulge in something you probably shouldn’t at the modern American restaurant, spend your Sunday evening watching an old-school movie in the screening room or sip cocktails at the bar where hours may seem to slide away. 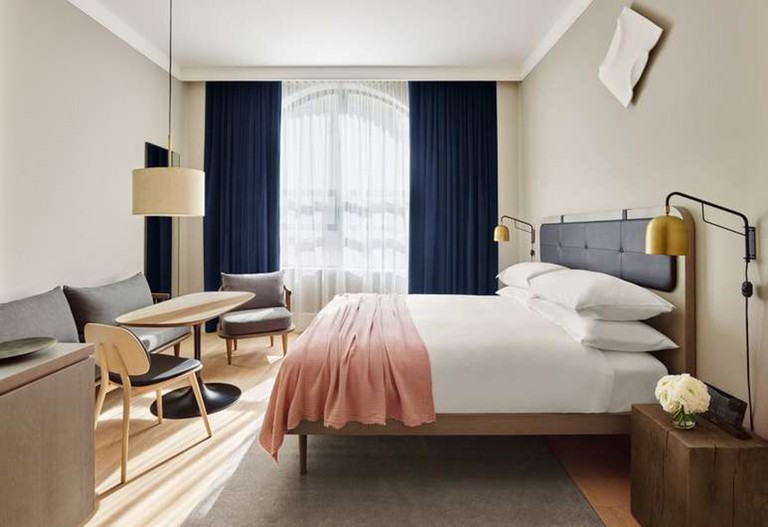 A blue, white and black mural that runs along the side of 11 Howard certainly hints at what’s to come inside. While the muted interiors may seem contradictory, both the external artwork and the internal decor are – for lack of a better word – cool. Rooms are designed by Scandinavian interior design brand Space Copenhagen, displaying blonde wood, brushed metals and blushed tones. Elsewhere, in-house restaurant Le Coucou is a destination unto itself – a New York institution that has been attracting the city’s most discerning diners in droves and is most definitely worth a reservation during your stay. Downstairs, the on-site bar, the blond, serves up cocktails and light bites in an art deco-style space, belting out pop, rock and dance anthems into the early morning – but you’ll need to make a reservation. 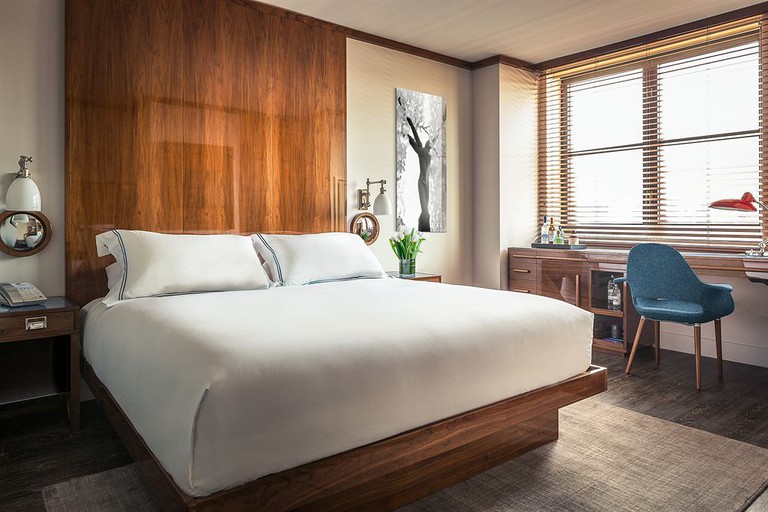 Courtesy of Hotel Hugo / Hotels.com
Expect sleek, modern rooms with a low-key nautical vibe at Hotel Hugo. Charcoal-toned floors, wooden touches and porthole-style bedside mirrors all contribute to the aesthetic. The real drawcard here, however, is the rooftop Bar Hugo – a glass-enclosed watering hole surrounded by the twinkling lights of city skyscrapers. Head east to Little Italy for dinner, before retreating to the hotel’s 20th floor for a nightcap that you won’t soon forget. 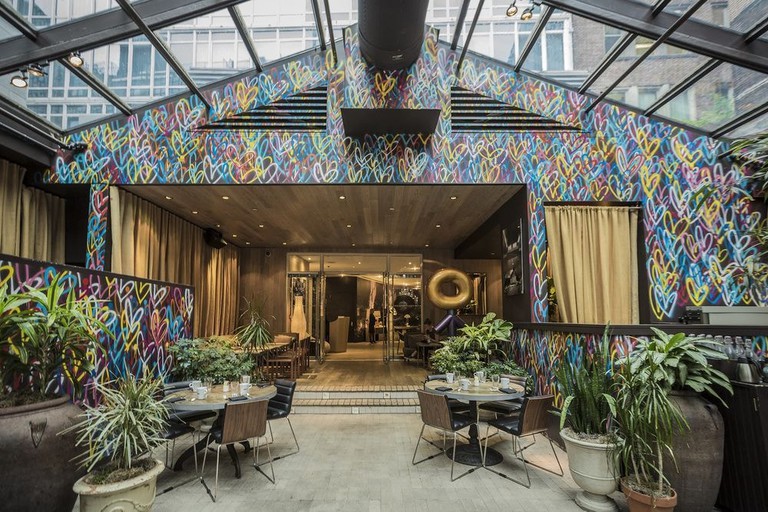 With sapphire-blue floors and ceilings and bone-white everything else, the rooms at NoMo SoHo have the look and feel of a Mykonos villa – with a modern metropolitan twist. The exception to this rule, however, is the penthouse suite. With wraparound floor-to-ceiling windows, this marble-filled space has some of the best views in the city. Elsewhere in the hotel, interiors are metropolitan and youthful, with neon-pink lighting, graffiti-heart strewn walls and emoji-topped statues that feel a little Jeff Koons – the famous American sculptor known for his Pop art pieces. With prices that are competitive for the area, this is a fun and unconventional bolthole in the heart of NYC. 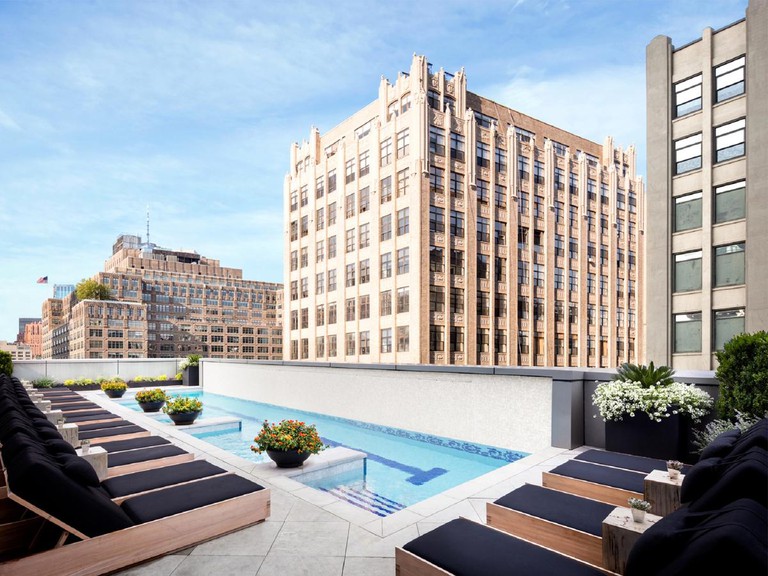 Courtesy of The Dominick / Expedia.com

The glass-clad high-rise that houses the Dominick seems to blend itself into the New York skyline with unassuming ease. It would be easy to overlook it when observing from afar, yet it’s definitely a hotel that will remain etched in your memory once you’ve discovered what’s inside. Think New York-style grandeur at its finest, with enormous bathrooms with free-standing baths and floor-to-ceiling windows offering unparalleled city views in every room. In summer, you should spend an afternoon, cocktail in hand, at the rooftop pool – and year-round, a trip to the city’s first Turkish hammam at the hotel spa will be a restorative experience after a busy day in the Big Apple.

This article is an updated version of a story created by Julia Goicochea.

If you’re visiting Soho in London, discover our guide to the best hotels in Soho, London, bookable on Culture Trip.