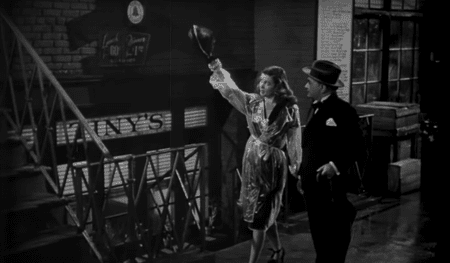 The re-creation of Manhattan’s West Village as a shimmering netherworld in the 1945 film noir is a testament to Hollywood production design.

Unhappily married Chris stores his unsigned paintings in the swanky love nest which he establishes for Kitty. Not that she allows him to make love to her; bliss for him is being allowed to paint her toenails, presumably scarlet, while she lolls around in a negligee and looks at him with contempt. 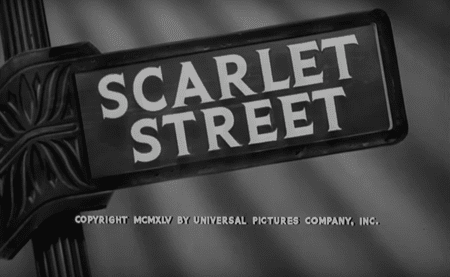 One of film noir’s most spidery femme fatales, aspiring actress Kitty has no qualms about passing Chris’s paintings off as her own and becoming a well-remunerated celebrity in New York’s art community. The leech Johnny buys himself a sports car out of the proceeds.

Most of Scarlet Street is set in Greenwich Village, including the scene in which Chris and Kitty first meet. Walking to an East Side subway station after attending a Saturday night dinner with his boss and colleagues, Chris spots Johnny beating up Kitty and hurries across the rain-slicked street to rescue her.

Timid though Chris is, he flaps at Johnny with his umbrella and succeeds in knocking him out. While Chris is fetching a cop, Johnny comes to and Kitty shoos him away. After sending the cop off in the opposite direction, she invites Chris to walk her home to her shared West Village apartment in a brick-fronted brownstone at 247 Grove Street.

He asks her to have a coffee with him in the bar, Tiny’s, at the house’s basement level. She persuades him to join her in a Rum Collins, though he’s already had too much champagne. 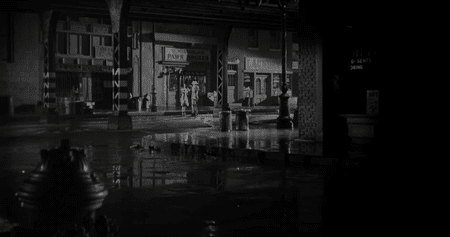 Inside, Kitty removes her see-through plastic mac and sits opposite Chris. Wearing a low-plunging shiny black frock, she is dressed to kill, and Chris is easy prey. He is already in love with her, which is a polite way of saying that he does not know that what he feels for this vulgar creature is lust. The movie traces his gradual downfall—which climaxes after he learns Kitty despises him—and his fate as a guilt-ridden homeless man sadomasochistically taunted by a ghostly female voice.

Scarlet Street originated in Georges de La Fouchardière’s novel La Chienne—meaning “bitch”—and Jean Renoir’s 1931 film version. Lang could hardly name his movie The Bitch in 1945. One rumor has it that he decided to call it Scarlet Street after he learned of Greenwich Village’s Carmine Street during a pre-production recce to the Village—carmine being a faintly purplish deep red.

Arrayed in purple and scarlet

However, in her book Fritz Lang (1976), Lotte Eisner records Lang saying “he did not know exactly what the title meant but that afterwards he remembered the passage in The Apocalypse of St. John [The Book of Revelation] where the whore of Babylon is described as ‘the woman arrayed in purple and scarlet’ and thinks that image may have been in the back of his mind.” 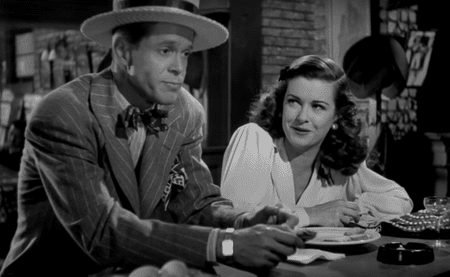 Since Scarlet Street was filmed on a sound stage and an outdoors lot at Universal Studios in the San Fernando Valley, Los Angeles, fans of the movie will seek in vain for locations from the film in Greenwich Village. Number 247 Grove Street doesn’t exist; ascending in numbers from west to east, Grove ends at number 210. (If you want to go to a Tiny’s in Manhattan, you’ll find a street level restaurant of that name and its “bar upstairs” at 135 West Broadway in Tribeca.)

Nonetheless, the spirit of the movie’s Village scenes still survives around Grove Street, where several of the houses resemble the movie’s 247. The Village has a number of open street spaces similar to the one in which Chris hares towards Kitty and Johnny’s fight; the same space—seen from a reverse angle—is where Chris and Kitty talk to the cop.

The banded steel supports in the street that are visible in this scene (below) would have supported the Ninth Street Elevated Railway, or El, as it passed along Greenwich Street in the Village, indicating this is where Chris ran to give Kitty his unwanted help. Since Scarlet Street is set in 1934, the El would have still been running—it did not close until 1940. 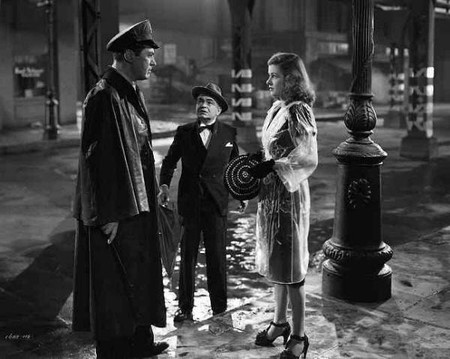 Scarlet Street‘s West Village is not the wealthy residential area dotted with trendy restaurants and boutiques that it is today. Alexander Golitzen, the movie’s production designer, did an excellent job of making it look seedy and run down. The German Lang did not ask Golitzen to stylize the exterior sets along Expressionistic lines, but the glossy, shadowy black and white streetscapes, where danger could lurk in every corner, is classic noir.

The West Village stores are nothing much: a low-quality deli, a tailor’s, a laundry; Kitty and Johnny fight outside a pawn shop. The weathered bills on the walls and tin garbage cans on the sidewalk suggest it is a decaying, low-rent neighborhood; a modern Kitty could never afford to live there. A less naive man that Chris might have guessed that he would have never found a respectable woman tussling with an obvious sharpster—and dressed as seductively as Kitty is— just before two on a Saturday morning in this neck of the woods. 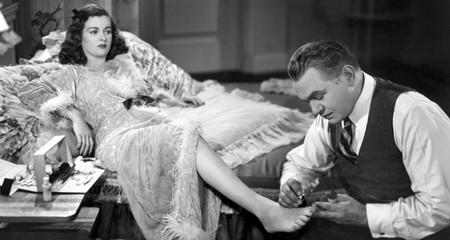 In its advertising materials, the film identifies Kitty with a big, black lamp post—the kind that a prostitute would theoretically stand under or lean against when soliciting business. A few lamp posts of that type can still be found in the West Village, and if you linger around Bethune, Perry, Washington, or Grove streets at night, you can still get that Scarlet Street film noir feeling. Just be careful who you speak to.