Awesome NYC Film Locations No. 10: SoHo in "After Hours" 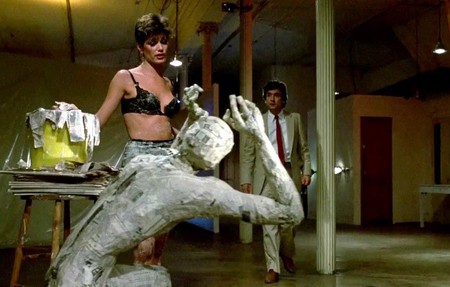 Linda Fiorentino and Griffin Dunne in "After Hours" | © Warner Bros.

When an attractive stranger gives you his or her number, look before you leap. That’s the timeless message of Martin Scorsese’s After Hours (1985).

The Manhattan neighborhood of SoHo has never seemed more desolate or dangerous than it does in Martin Scorsese’s After Hours. As photographed by Michael Ballhaus, the wide streets and dark former factory buildings create a series of foreboding canyons that dwarf the computer operator Paul Hackett (Griffin Dunne) as he runs from a succession of dangerous women and treacherous situations. He starts to realize that coming to SoHo with the intention of getting laid by Marcy (Rosanna Arquette), whom he had met in a midtown café earlier in the evening, was an ill-advised idea.

As Paul becomes increasingly paranoid during his nocturnal jaunt, Scorsese’s troubling comedy takes on the quality of a protracted nightmare. The Kafka-esque labyrinth Paul finds himself trapped in is a reflection of his addled psyche. It was the British director Michael Powell who suggested, meanwhile, that Scorsese come up with a Kafka-esque ending. 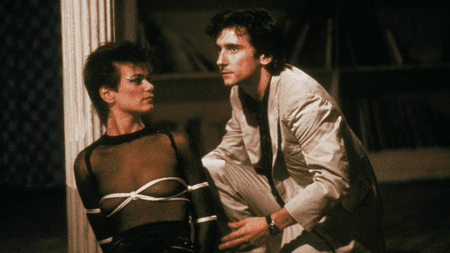 Linda Fiorentino and Griffin Dunne in “After Hours” | © Warner Bros.

Calling at Marcy’s loft at 28 Howard Street and Crosby, Paul finds her sculptor roommate Kiki (Linda Fiorentino) working on a papier-mâché figure that reminds him of Edvard Munch’s painting The Scream (though he gets the title wrong). Marcy is absent. Paul soon finds himself massaging the impassive, smoky-voiced Kiki’s shoulder. It transpires during the course of the evening that she has a taste for disrobing and bondage, and though she intimates that she’s available, Paul shrinks from her. Unnerved by her darkness and strength, he holds out for the fair and the girlish.

When Marcy arrives she is initially inviting but, with her whinnying laugh and sudden mood swings, she is evidently unstable. Unable to settle in the loft, she and Paul head out to a diner. (Scorsese filmed Dunne and Arquette at the now-closed chrome and blue River Diner at 11th Avenue and West 37th Street.) There, Paul receives off-putting intelligence about Marcy directly from her own lips.

Twice, though, he will be drawn back to her and Kiki’s loft, like a criminal returning to the scene of a crime. After his first departure, he discovers he hasn’t enough money to buy a subway token to get a train uptown. He takes shelter in the Terminal Bar, named by Scorsese for a Times Square bar that features in Taxi Driver (1976) but filmed at the Emerald Pub at 308 Spring Street and Renwick. Here he meets the bartender, Tom (John Heard), and the waitress Julie (Teri Garr), who sets her cap at Paul. Back at the loft, he discovers a tragedy has occurred—one that Scorsese doesn’t hesitate to eroticize.

Griffin Dunne and Rosanna Arquette in “After Hours” | © Warner Bros.

Rejected by Paul, Julie pastes up a series of wanted posters targeting him. Ice cream vendor Gail (Catherine O’Hara) then leads a group of local vigilantes in pursuit of him. Paul’s hubris in anticipating sex with blonde Marcy is answered by the older blondes Julie and Gail taking revenge on him. Seeking refuge a second time in the punk nightclub Berlin, Paul dances with the washed out June (Verna Bloom), another blonde, to Peggy Lee’s “Is That All There Is?” It’s fourth-time lucky. Like Kiki the sculptor, June helps Paul escape the mob, albeit at cost to his person.

After Hours forms a loose trilogy with Scorsese‘s other nocturnal New York films, Taxi Driver and Bringing Out the Dead (1999). Written by Joseph Minion, it is also part of a group of 1980s yuppie comeuppance features, including the Minion-scripted Vampire’s Kiss (1988) and, as J. Hoberman pointed out in The New York Times recently, Lost in America (1985), Desperately Seeking Susan (1985), and Something Wild (1986). Also recalling the femme fatale-itis of Fritz Lang’s The Woman in the Window (1944), After Hours conjures a watchword: “Lead us not into temptation.”