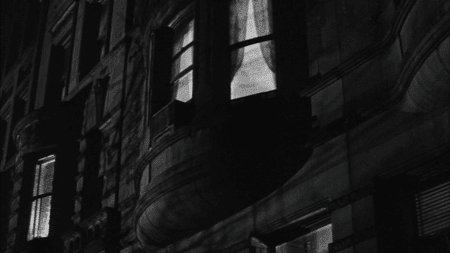 Fans of Billy Wilder’s The Apartment (1960) who find themselves strolling on Manhattan’s Upper West Side should glance at the brownstone walk-up rented by Jack Lemmon’s C.C. Baxter—which he regrettably loans to his sleazy bosses.

Baxter’s apartment is the site of copious murky extra-marital sex—not indulged by him personally—a suicide attempt, and days of tender caring for a recovering woman, Fran Kubelik (Shirley MacLaine), whom Baxter loves. Thoughts of the place, and Wilder’s bittersweet masterpiece itself, can’t help but engender mixed feelings, nostalgia among them.

The address given for Baxter’s one-bedroom apartment is 51 West 67th Street, #2A. However, Wilder shot the brownstone’s exteriors at 55 West 69th Street, between Columbus Avenue and Central Park West, in the wet, chilly winter of 1959 before decamping with his crew to film interiors on sound stages at The Lot, 1041 North Formosa Avenue, in West Hollywood. (Lemmon had caught a cold shooting a night scene in Central Park, and his sniffles and stuffed nose were incorporated into the plot.) 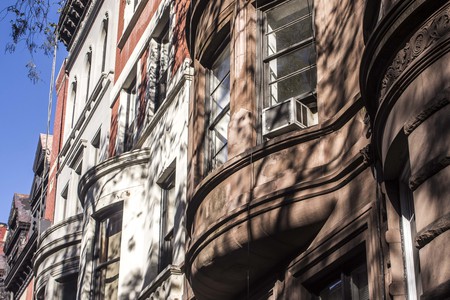 Built in 1910, the four-story brownstone on the north side of 69th Street has lost its elegant sweeping stoop, but the facade otherwise looks much as it did in 1959. There are 10 units there now. Baxter rented his apartment for $85 a month, but $2,500 likely wouldn’t pay for its equivalent today.

Written by Wilder and I.A.L. “Izzy” Diamond, The Apartment—1960’s Best Picture Oscar-winner—is a comedy about human decency and indecency, in which Baxter learns to “be a mensch,” in the words of his kindly neighbor Dr. Dreyfuss (Jack Kruschen). Initially, Baxter is a good-natured guy who’s been suckered into being a louse. 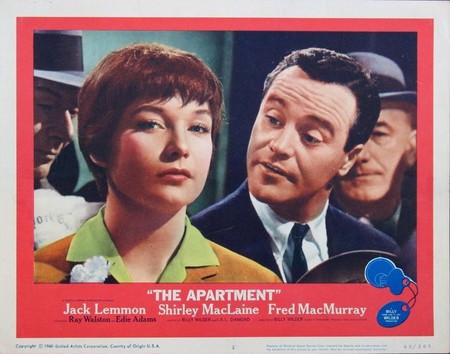 Baxter is a lowly number cruncher at Consolidated Life of New York. Nothing distinguishes him from the insurance company’s other 31,258 employees, but the randy executives above him have got wind of the fact that he has a bachelor’s pad he’s prepared to loan out on evenings.

Knowing Baxter is an aspiring executive himself, four of his bosses (played by David Lewis, Ray Walston, Willard Waterman, and David White) write glowing promotion references for him in exchange for his apartment key, so they can “entertain” their office squeezes and casual girlfriends in his apartment. (None of these ageing ladies’ men, it’s worth noting, could be considered a catch.) Baxter’s co-operation earns him a second assistant job and a private office with a window. 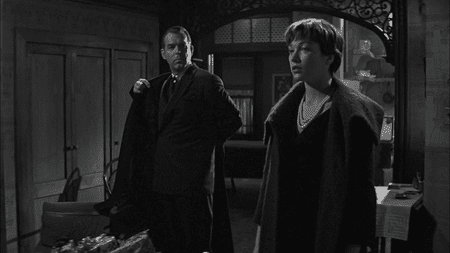 When the married personnel chief Jeff Sheldrake (Fred MacMurray) learns about Baxter’s apartment, he wants in. Baxter complies and gets promoted again. At the riotous office Christmas party, Baxter is sickened to find out that elevator operator Fran—who stood him up when they had a theater date—is Sheldrake’s on-again, off-again mistress.

At the same party, Fran, who is unrequitedly in love with Sheldrake, learns from his secretary Miss Olsen (Edie Adams), one of his discarded mistresses, that he is a serial philanderer. (Miss Olsen bequeathed her name to Peggy Olson in Mad Men, hugely infuenced by The Apartment).

After Sheldrake cheaply gives Fran a $100 bill as a Christmas present and leaves her at Baxter’s apartment to go home to his wife and sons on Christmas Eve, she overdoses on Baxter’s sleeping pills. (She doesn’t know, of course, that she’s at his place.) Discovering Fran near death, Baxter shoos away Margie (Hope Holliday), the barfly he’s picked up, and enlists Dr. Dreyfuss in keeping Fran alive. 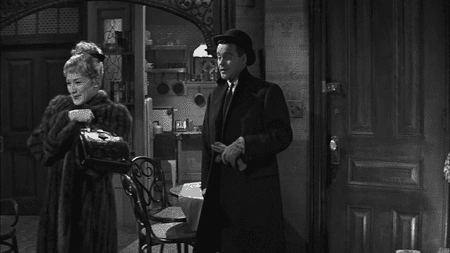 Though hilarious, The Apartment deals seriously with romantic grief and is built on mostly bleak ironies: Baxter lets Dreyfuss and his wife (Naomi Stevens) go on thinking that he’s a playboy when he couldn’t be more lonely; he nobly takes the blame for Fran’s suicide attempt to help her save face, eventually getting a black eye from her brother-in-law for his trouble.

On the sweeter side, irony-wise, is the fact that Baxter and Fran establish a chaste intimacy in the couple of days she spends recuperating in his apartment. It is in marked contrast to the cruel and sordid nature of Sheldrake’s sexual exploitation of Fran.

She rattles on self-pityingly about being in love with someone who doesn’t love her back, and speculates why she can’t fall in love with someone nice like Baxter. “Well, that’s the way it crumbles, cookie-wise,” he says. He’s mensch enough by now not to attempt to court Fran, especially in her debilitated state, though they fall into a courtship unconsciously. 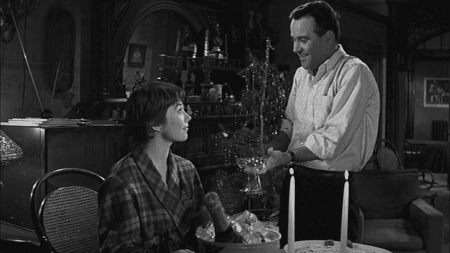 The quality of their intimacy is enhanced by Alexander Trauner’s production design and Edward G. Boyle’s set design of Baxter’s cluttered railroad apartment, which may not have ever existed in Manhattan but will be there in our imaginations if we walk along 69th Street and look up.

Thanks to the low-lit black and white cinematography by Joseph LaShelle, Baxter’s living room and bedroom are as dingy as the undecorated lobby, staircase, and landing that lead to it. But he has made an effort to brighten it up. It has a range of tolerable mid-century furniture and three Tiffany lamps that would fetch around $40,000 each today.

Touchingly, Baxter has pinned to his apartment walls a number of prints he’s clearly bought on visits to the Museum of Modern Art—among them reproductions of Marc Chagall’s I and the Village, Piet Mondrian’s Trafalgar Square, Paul Klee’s Around the Fish, a barely distinct Picasso, and Henri Rousseau’s The Sleeping Gypsy. The latter painting inspired the image of Fran lying unconscious on Baxter’s bed following her overdose.

There are books and tchotchkes on Baxter’s shelves. The books are mostly paperbacks, and his buying of another one at a newsstand indicates he’s not an overly intellectual reader, but he does at least read.

His record collection includes an Ella Fitzgerald album (full marks to him for that). All this culture marks Baxter as a very different man from the ugly philistines who borrow his key and rush to his apartment with one thing on their minds. As bachelor pads go, it couldn’t be less made for seduction. It is, as Margie says during her brief visit, “Snugsville!”

All it’s screaming out for is a feminine touch—in fact, the Fran Kubelik touch, design-wise, comfort-wise, and love-wise.