At the Rubin Museum, Ancient Buddhist Artworks Teach Us Not to Fear the Future 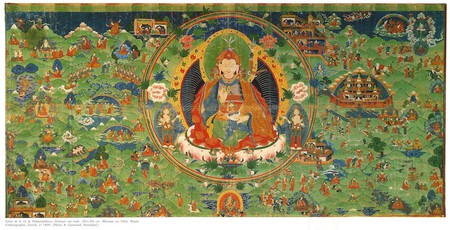 Scenes from the Life of Padmasambhava. Bhutan or Tibet; ca. 18th century. Ethnographic Museum at the University of Zurich. | Courtesy of the Rubin Museum of Art

When time is linear, we learn to fear the consequences of every decision we make. Despite our best efforts to secure imminent wellbeing, the principles of linear time obliterate the possibility of a fate other than what we inevitably have in store. But what if we could re-learn to perceive time not as fixed, but as fluid? The Second Buddha: Master of Time delves into the ancient legends of Padmasambhava, credited with bringing Buddhism to Tibet, through nearly 900 years of art celebrating his teachings. Presented by the Rubin Museum, The Second Buddha imparts an optimistic wisdom that encourages a different, perhaps more forgiving perspective of time.

Amid a low-lit exhibition space showcasing more than 40 treasures from 13th century through 20th-century Tibet and Bhutan, a relatable narrative sounds out from a nook. Inside, a video installation lays bare the traditional Western perspective of linear time, rife with the fear and anxiety of a fixed future outside of human control.

I think about time with a sense of urgency. “Do I have enough time?”

Time waits for no one. Its path is linear, continuous, unrelenting. It flows in only one direction. Past. Present. Future.

I can move from place to place, but not from time to time. The trajectory of my life is parallel with the continuous movement of time. Maybe this is why we are obsessed with measuring time—why I can’t stop worrying about the future. I don’t have any control over it.

Can I break free of my perspective? 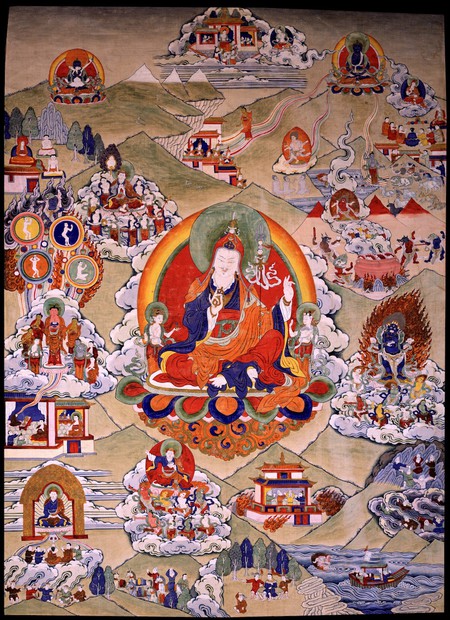 Through some eight centuries of paintings, sculptures, and textiles depicting the legends and teachings of the enlightened Padmasambhava, also known as the Second Buddha, the Rubin Museum says yes, you can alter your perspective of time.

“If you’re like me, you’re usually thinking about something that hasn’t happened yet,” writes the Rubin Museum’s executive director, Jorrit Britschgi. “Perhaps you’re excited about an upcoming journey, worried about an uncertain result, or simply curious about what lies ahead. Most of the choices we make, and the decisions we ponder, are directed toward what is yet to come, and humans have been facing the future for all of history. At the Rubin this year, we challenge you to create a new relationship with the future—to consider a future that is not fixed, but fluid.” 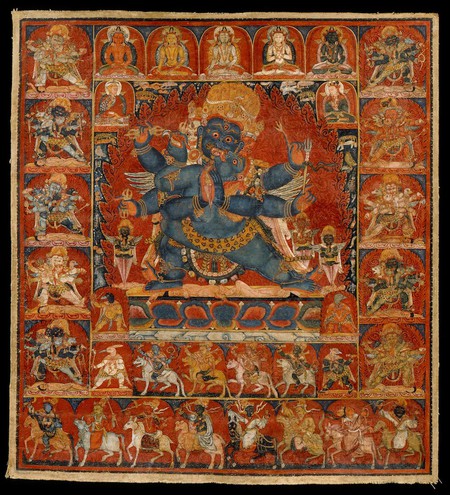 Vajrakilaya of the Eight Pronouncements. Tibet; ca. late 13th century. Pigments on cloth. | Courtesy of the Rubin Museum of Art

The Second Buddha: Master of Time invites visitors into the ancient world of Padmasambhava, an eighth-century enlightened thinker who legend says traveled from India to Tibet and introduced the principles of Buddhism to the Tibetan people.

Believed to be all-knowing, Padmasambhava could foresee periods of turmoil, so he hid his “treasure teachings” (terma) in the future for reincarnated disciples (terton) to find and carry forth when the time was right. Uncovered as objects, thoughts, and revelations through time, the terma were transcribed and shared with their own disciples through the years. Today, Padmasambhava remains an exalted figure in Buddhist culture. 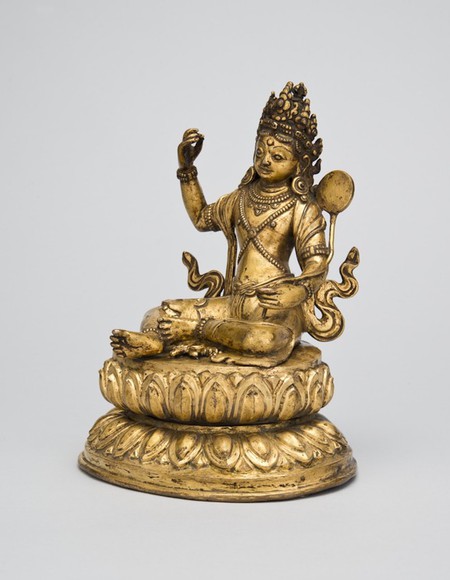 “Tibetans tie their cultural identity to stories about this famous enlightened master, which have been written and rewritten over centuries and are still being told, retold, and expressed in diverse forms of visual and performed arts,” said the Rubin Museum’s curator of Himalayan art, Elena Pakhoutova. “The system of concealed treasure teachings continues to sustain the Buddhist tradition today.”

What ensued was not only an ontology, but an exquisite visual culture. 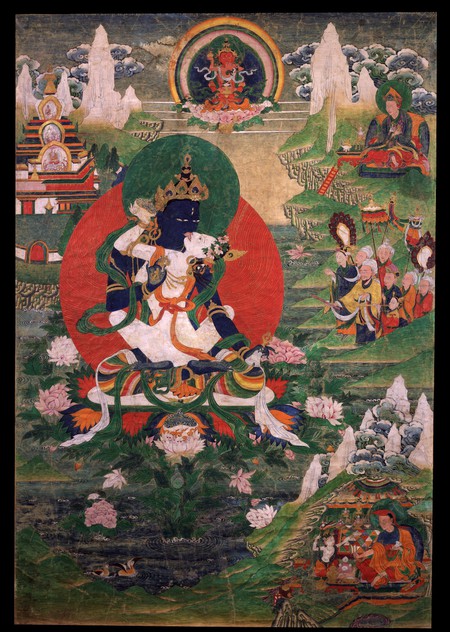 From 13th-century stone carvings to 17th-century silk appliqués, 19th-century textiles and iron ritual scepters dating back to sometime between the 11th and 15th centuries, The Second Buddha showcases a breadth of stunning portrayals of Padmasambhava: a figure traditionally depicted sitting in the lotus position, wearing a lotus hat and holding a trident, a skull cup, and a vajra scepter.

“Such a representation reflects Padmasambhava’s unique role in Tibetan culture,” explains an exhibition label. “He is considered to be both an enlightened being, the Second Buddha, as well as a person.” 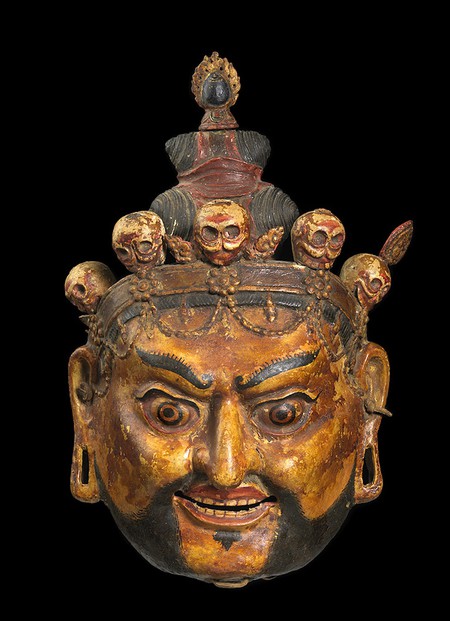 Padmasambhava teaches the art of time manipulation, by which the future is entangled with the past and the present, lending a comforting fluidity to fate and fortune. “If I am an enlightened person, I see every moment as it really is—as both distinct and part of a whole dimension of time,” the Rubin Museum’s video installation continues. “Instead of passively experiencing time, I am able to actively engage with it.”

Organized into three sections, The Second Buddha introduces Padmasambhava as a cultural and a historical figure. The remaining space explores his teachings as they relate to time. Interactive AR technology nods to Padmasambhava’s concealed teachings while showcasing the future of exhibitions, as visitors can uncover hidden content through iPads stationed throughout the room. 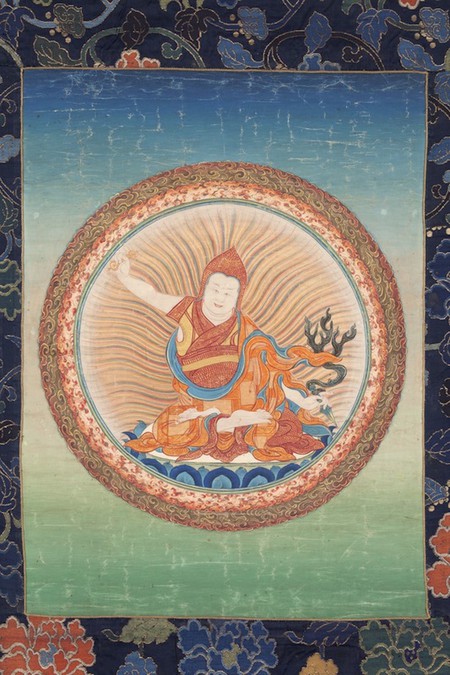 With The Second Buddha, the Rubin Museum of Art—a Chelsea-based institution dedicated to the arts and culture of the Himalayan region—inaugurates their 2018 program of exhibitions and events dedicated to the future.