And Now for Something Completely Pythonic...

Forty-eight years and 15 days have elapsed since Monty Python’s Flying Circus was first broadcast by BBC One in England. To celebrate this momentous anniversary, the Quad Cinema is screening a bunch of Python and Python-related movies. In terms of New York film programming, this mini-season is a “a carnivorous cornucopia in an evergreen El Dorado.”

And Now for Something Completely Different (1971)

Ian MacNaughton, director and producer of 41 of the 45 Monty Python television shows, re-shot sketches from the series for this movie compendium aimed at American audiences. Just as the show deconstructed TV with “meta” bits, so ANFSCD has meta-movie moments. It was a particularly good showcase for Terry Gilliam’s animations. Memorable sketches include “Dirty Hungarian Phrasebook,” “Marriage Guidance Counsellor,” “Nudge Nudge,” “Seduced Milkmen,” “Dead Parrot,” and “The Lumberjack Song.”

King Arthur (Graham Chapman) and his horseless knights go in search of the Grail, even as a police inspector pursues them for the murder of a pontificating television historian. There’s the prioress who wants oral sex; a musical nod to Camelot; the Knights Who Say Ni; and the Black Knight whose loss of limbs is no deterrent to fighting Arthur. Best of all is the oppressed serf, Dennis (Michael Palin), who objects to Arthur being King because the Lady of the Lake gave him Excalibur. The two Terrys—Jones and Gilliam—directed the film and drenched it in medieval atmosphere.

Terry Gilliam’s first film as a solo director was inspired by the dragon mentioned in a poem in Lewis Carroll’s Through the Looking Glass. Dennis Cooper (played by Michael Palin, the only other Python involved) is an apprentice medieval cooper who goes to seek his fortune and, owing to two cases of mistaken identity, is dispatched to kill the mythical beast. 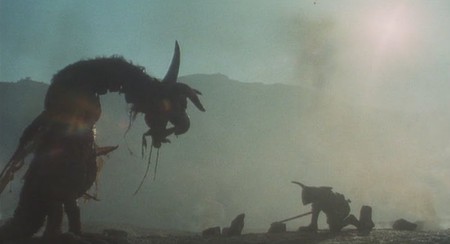 The third Python film—about the guy (Graham Chapman) born in the Bethlehem cattle shed next to the one Jesus was born in—features arguably the best nativity in cinema. Michael Palin played Pontius Pilate with a Claudius-like speech impediment (“Are you laughing at me, thenturion?”). Look out for the animated alien abduction of Brian and enjoy Eric Idle leading the crucified prisoners singing “Always Look on the Bright Side of Life.” That caused the movies’ best religious scandal until Martin Scorsese’s The Last Temptation of Christ (1988) came along.

Why does Evil exist? Find out by watching Gilliam’s second solo feature, written by him and Michael Palin. It depicts the adventures of a history-obsessed schoolboy who travels through time with six dwarves who have stolen a map owned by the Supreme Being (Ralph Richardson). John Cleese plays Robin Hood, Ian Holm is Napoleon, Sean Connery is Agamemnon and a modern-day fireman, and David Warner is Evil. Michael Palin and Shelley Duvall are amusing as lovers thwarted in medieval times and on the Titanic.

Returning to the sketch format of And Now For Something Completely Different, The Meaning of Life roughly follows the human life’s journey chronologically, though it’s also got a lot of fish in it. The highlights include Michael Palin as the father who leads his huge family in singing “Every Sperm Is Sacred,” schoolmaster John Cleese’s “Sex Education” class, and the “Crimson Permanent Assurance Pirates.” The disgusting sketch par excellence features Terry Jones as Mr. Creosote, the obese gourmand who takes one bite too many.

The movie named by John Cleese as “one of the six worst films made in the history of the world” demands to be seen. A Graham Chapman project, suggested by Keith Moon, copiously rewritten and badly Americanized, it’s a very silly tale about pirates and the search for a treasure hoard. John Cleese and Eric Idle joined Chapman in the cast, along with Peter Cook (who contributed to the script), Martin Hewitt, Peter Boyle, Cheech and Chong, Spike Milligan, James Mason, and Susannah York. Marty Feldman made his final film appearance in it. David Bowie played a shark. Chapman died in 1989. 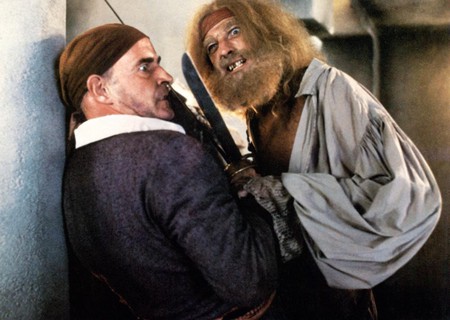 Influenced by George Orwell and Franz Kafka, Gilliam’s beautifully designed dystopian fantasy is set in a futuristic state (with retro machinery) that ensnares a government drone (Jonathan Pryce) in a nightmare involving totalitarian control, bureaucracy, terrorism, and counter-terrorism. An event in the 1980s—and a harbinger of the short-lived British Film Renaissance—it is the most important post-Python movie. Michael Palin is in the cast, along with Robert De Niro, Ian Holm, Kim Greist, Katherine Helmond, and Bob Hoskins. 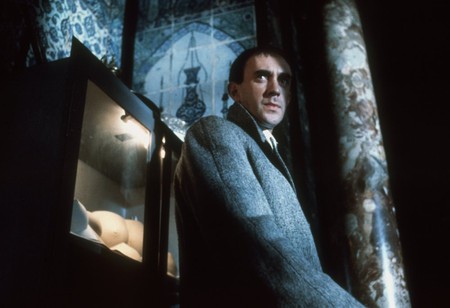 The celebrated English madam Cynthia Payne was all the rage in 1987, thanks to two films scripted by David Leland. Newcomer Emily Lloyd starred in Wish You Were Here (1987), inspired by the teenaged Payne’s affair with an older man (Tom Bell) and directed by Leland. Terry Jones directed Julie Walters in Personal Services, which shows how Payne became a brothel-keeper catering to the kinks and fetishes—some of them predicated on sexual self-denial—of middle aged and elderly gentlemen. Jones was the only Python involved in the film. 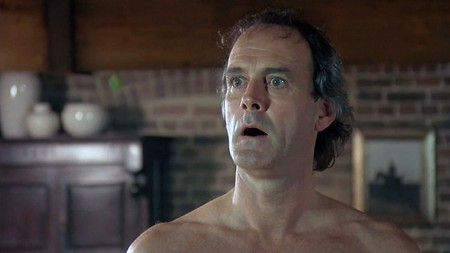 With the world plunged into the dark age of Ragnarök, Erik (Tim Robbins), who is averse to raping and pillaging, sets off to visit the gods to ask them to give everyone a break. The goofiest of all post-Python movies was a Norse saga written and directed by Terry Jones as an alternative version of a book he wrote for his son. Any movie that co-stars Mickey Rooney and Eartha Kitt is worth its weight in well, not gold, but…pewter? Jones plays King Arnulf, the father of the princess (Imogen Stubbs) who wins Erik’s heart. John Cleese is Halfdan the Black, the real ninth century king of Vestfold and father of Norway’s first king. 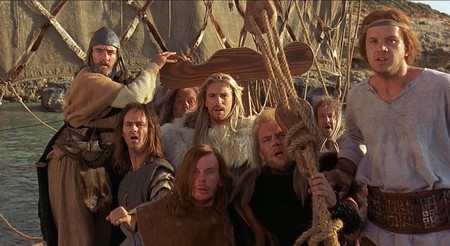 In Terry Jones’ children’s film of Kenneth Grahame’s anthropomorphic novel, the creatures of the fields, riverbank, wood, and Toad Hall, of course, are barely disguised humans, but the adaptation is so affectionate and joyful that it enables complete suspension of disbelief. Alongside Steve Coogan as Mole, all the surviving Pythons except Terry Gilliam appeared: Jones as Mr. Toad, Eric Idle as Rat, Michael Palin as the Sun, and John Cleese as Toad’s lawyer. Nicol Williamson was Badger and Stephen Fry the Judge. The movie is also known as Mr Toad’s Wild Ride. 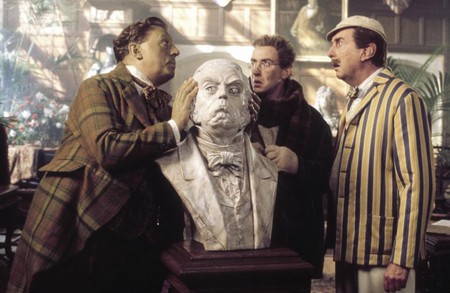 Terry Jones, Steve Coogan, and Eric Idle in The Wind in the Willows | © Columbia