An Introduction To Aretha Franklin In 10 Songs 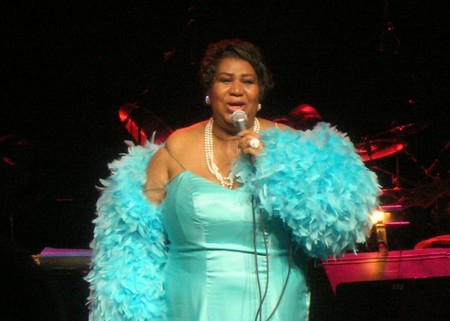 Tennessee-born “Queen of Soul” Aretha Franklin has been a household name since the 1960s. Recipient of the USA’s highest civilian honor, the Presidential Medal of Freedom, and an astounding 18-time Grammy Award-winner, Ms. Franklin is one of the music industry’s most iconic figures. We profile her incredible 50-year career with an introduction to Aretha Franklin in 10 songs.

Off of her 1968 album Lady Soul, ‘Natural Woman’ is one of Ms. Franklin’s most iconic songs. Her 2015 vocal performance brought President Obama to tears at The Kennedy Center Honors in Washington D.C., as she honored the track’s writers, Gerry Goffin and Carole King. Her mesmerizing voice, backed by a powerful chorus, brought the President and the First Lady to their feet.

‘I Say A Little Prayer’

From her 1968 album Aretha Now, ‘I Say A Little Prayer’ (originally by Dionne Warwick) details a woman’s daily prayers for her love interest off in Vietnam. Featuring her signature soulful, rhythm and blues feel, Ms. Franklin’s gospel version of this song is so moving and so powerful that it landed the number three spot on the R&B chart.

One of this century’s most powerful feminist anthems, ‘Respect’ came off of Aretha Franklin’s 1967 album, I Never Loved A Man the Way I Love You. Covering the original version by Otis Redding, Aretha Franklin demanded the world’s respect for her powerful vocals in this exceptional rendition. This iconic rendering landed her the number one spot on the UK’s Top 10 charts, and it has gone down in history as one of Rolling Stone‘s Top 500 songs.

Also hailing from her 1968 album Aretha Now, ‘Think’ was the number one R&B hit for three weeks in May 1968, selling over a million copies. Listen to her proud, soulful demands for freedom and respect below.

Featured on her 1967 album I Never Loved a Man The Way I Love You, ‘Dr. Feelgood (Love is a Serious Business)’ is a gospel-inspired tribute to Aretha Franklin’s rich musical heritage. Highlighting impassioned vocals and a bluesy rhythm, ‘Dr. Feelgood’ embodies Ms. Franklin’s soulful presence.

‘I Never Loved A Man’

One of her most passionate works, ‘I Never Loved A Man’ turned Aretha Franklin into the Queen of Soul. She rocketed to fame with this first Top 10 hit, in which she sings about her helpless attachment to a no good, heartbreaking, lying cheater.

‘I Knew You Were Waiting’

Off of her 1986 album Aretha, ‘I Knew You Were Waiting’ is a love-conquers-all duet with George Michael, which topped the Hot 100 chart for two weeks straight in 1987. George Michael and Aretha Franklin collaborated to strut their vocal stuff in this bright and cheery soul-pop tune.

From Spirit in the Dark (1970), Aretha Franklin turned this cover of Ben E. King’s song into an R&B anthem that sold more than one million copies, and it peaked on the R&B singles chart for five weeks straight.