An Introduction To 90s Girl Bands In 10 Groups 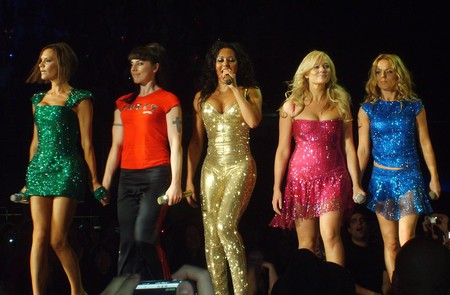 The 1990s was a decade filled with female empowerment, which was definitely supported by the surge of girl bands flooding the stages. These ladies showed us the power an all female group truly holds and that they can play right along with the boys in the music industry. Whether you’re looking to feel feisty, sexy, or inspired, there’s a girl group to suit your every mood. Take a nostalgic trip back in time with us as we unveil our list of the top ten 90s girl bands, just as relevant today as they were back in the decade of slap bracelets, AOL dial-up, and Blockbuster’s peak.

“So tell me what you want, what you really, really, want.” Everybody wants a little spice in their life, which has been validated solely by the efforts of one of the greatest girl bands of all time. The Spice Girls invaded our culture in 1996 with the release of their debut single, “Wannabe,” immediately earning the ladies a spot as a global phenomenon. The English pop group’s debut album, Spice, sold more than 31 million copies worldwide, becoming the best-selling album by a female group in history. In their overall career, they have sold over 80 million records worldwide, earning them a whirlwind of record breaking titles, including best-selling female group of all time, one of the best-selling pop groups of all time, and the biggest British pop phenomenon since Beatlemania. If anyone can compete with the angelic crooners encompassing The Beatles, it’s certainly the feisty Brits that stood for “girl power”.

Coming a long way from their bluegrass roots, the Dixie Chicks managed to take their country sound and dominate the 1990s music scene. The trio formed in Dallas in 1989, touring bluegrass festivals and small venues for six years before they attracted a major label. By 1998, however, they achieved commercial success with “There’s Your Trouble” and “Wide Open Spaces”. As of 2015, these country ladies have 13 Grammy Awards under their belts. Not only that, but these cowgirls are “not ready to back down” from this success. As of December 2015, they had become the top selling all-female band and biggest selling country group in the U.S. with 30.5 million certified albums sold and 27.5 million albums in sales in the U.S. alone. It’s safe to say the Dixie Chicks have been flying “as high as you can into the wild blue” since the 90s.

We all need some folk influence in our day-to-day to bring us back “to a simpler place in time,” and this duo has given us the exact dose. Indigo Girls are made up of life-long friends Amy Ray and Emily Saliers, having met in elementary school and combining their musical talents since high school. Epic Records signed the duo in 1988 after the success of other folk-based singer-songwriter acts, such as 10,000 Maniacs, Tracy Chapman, and Suzanne Vega. Their efforts began to be publically recognized at the 1990 Grammys, where they won the award for Best Contemporary Album and were nominated for Best New Artist, losing to Milli Vanilli who infamously had to revoke the award. They continued to release albums through the 90s, their second album, Nomads Indians Saints, going gold in December 1991 and their fifth album, Swamp Ophelia, going platinum in September 1996. Since 2007, Indigo Girls went back to releasing albums independently, going back “to the life they once knew”.

The Pussycat Dolls we know today may have been a cultural staple in the 2000s, but the group got their start as a burlesque troupe in 1995, making them eligible for this list. Plus, it felt wrong to have a list of girl bands excluding the sultry ladies who introduced us to Nicole Scherzinger. The 90s burlesque outfit attracted media attention, which lead to a record deal in 2003. Following the record deal, auditions were held, bringing us the group that rose to mainstream fame. This fame came after the launch of their debut album, PCD, containing number one singles “Don’t Cha” and “Buttons.” The album, released in 2005, sold 3 million copies in the United States. In 2006, the group became one of the top-selling artists of that year. The ladies, known for their tantalizing lyrics and continued modern burlesque ways, announced a short hiatus in 2009, but it ended up being an official break-up. “Don’t cha wish” they were still together making music? We do too.

Just in time for the turn of the century, Dream entered into our lives and wrapped up the 1990s in the catchiest of fashions. The quartet was originally formed in 1998 under a different name. After going through some changes to the group, they were signed by Sean Combs to his label. By 2000, they became a hit with their debut album, It Was All a Dream, which spawned their most popular single, “He Loves U Not.” The song peaked at number two on the Billboard Hot 100 and the video also peaked at the second place spot on the throwback MTV show we all miss receiving our pop culture news from, TRL. If you were a fan of these ladies, your dreams for a reunion have come true. In April 2016, Dream announced they would be going on tour this summer as part of the 2016 MY2K Tour with additional performances by 98 Degrees, O-Town, and Ryan Cabrera, also known as a heavenly lineup for any soul stuck in the 90s and early 2000s.

They taught us the most important vocabulary lesson any 90s girl could learn: the definition of a scrub. TLC formed in Atlanta, Georgia in 1990, dominating the decade with their female empowerment. Throughout their career, they scored ten top-10 hits on the Billboard Hot 100, including four number-one singles “Creep,” “Waterfalls,” “No Scrubs,” and “Unpretty”. These ladies did not “keep it on the down low,” their success spanning even further than their number one singles. They have also recorded four multi platinum albums, including the 1994 CrazySexyCool, which still holds a place in history as the only album by a female group to receive a diamond certification from the Recording Industry Association of America (RIAA). Worldwide, TLC has sold over 71 million records, earning the title of the best-selling American girl group of all time. The trio has faced some hardships during their career, including the tragic death of member Lisa “Left Eye” Lopes in 2002, leaving the group as a duet. TLC was an important part of the 90s music scene, reminding us ever so politely to “stick to the rivers and the lakes that we’re used to,” no matter how tempted we are to “chase” that “waterfall”.

Music is a wonderful way to send a powerful message in an attempt to make the world a better place, and En Vogue has used their melodies to serve this purpose. The R&B/pop group were founded in 1989, releasing their debut album in 1990. In 1992, their follow-up album, Funky Divas, reached the top 10 in both the U.S. and UK. The album also doubled from its debut and went multi-platinum, introducing us to pop singles “My Lovin’ (You’re Never Gonna Get It)” and “Giving Something He Can Feel”. Overall, the group has won seven MTV Video Music Awards, three Soul Train Awards, two American Music Awards, and seven Grammy nominations. “Free your mind” to leave room for all the memories involving the musical talents of these soulful ladies.

Ireland has introduced many musical acts to the United States, including 90s girl group B*Witched. During the span of their career, these ladies enjoyed success in both Europe and North American, releasing two albums and eight singles, all earning a spot on the UK Top 20. Four of these eight singles reached the number spot on the UK Singles Chart. By 2002, they had sold over 3 million albums worldwide. These girls know how to “let the fun begin” with their catchy tunes and upbeat attitude, making any 90s soul kick back and live by the motto “c’est la vie”.

Before they were preaching to us their “spots are different, different colors” on an all-time favorite Disney Channel Original Movie, The Cheetah Girls, two of the four “cheetah sisters” were providing their harmonies to the trio, 3LW. Standing for “3 Little Women,” this girl group formed in 1999 and released their debut single, “No More (Baby I’ma Do Right)” in 2000. Their self-titled debut album, 3LW, became certified platinum by the RIAA, selling 1.3 million copies in the U.S. In 2001, the ladies went on the MTV Total Request Live tour with Destiny’s Child, Dream, Nelly, Eve, and Jessica Simpson, practically taking us back just a few years to the decade we just left. “You do or you don’t, don’t” love 3LW for their smooth sounds, but you can’t deny these ladies had a great run. Let’s face it though, chances are you do love them too.

Before Beyoncé was “crazy in love” with Jay-Z and sipping on some sweet “lemonade” mixed with a teaspoon of hit songs and a dash of fierceness, she was providing talents to this gift of a girl band. Destiny’s Child was founded in 1990 in Houston under a different name, shooting to mainstream fame in 1999 after the release of their second album, The Writing’s on the Wall, containing number-one singles “Bills, Bills, Bills,” and “Say My Name”. These “independent women” have made a name for themselves as a group, selling more than 60 million records worldwide to date. Although the ladies gave their official farewell performance at the 2006 NBA All-Star Game, fans were “not gon’ give up” on the idea of seeing the trio perform together on the stage again. We were all granted our wish during Beyoncé’s Super Bowl performance in 2013 where the girls reunited to perform “Bootylicious, “Independent Women,” and Beyoncé’s single, “Single Ladies”. We are all “survivors” of a time without new music from this 90s girl band, but we will “keep on surviving” as long as Beyoncé remains in our lives.