You’ve said that your artwork is inspired by technology, and that it explores interpersonal relationships in the 21st century, “where intimacy is often replaced with immediacy.” Can you elaborate on this idea?

There is no question that the Internet has an immediate and powerful impact on our relationships. I’m interested in the ways in which technology shapes our identities and interpersonal connections. My work explores the sensual, vulnerable, and alienating aspects of the digitization of society. I believe that the power of desire for connection can be found in the ways in which people use technology to connect with each other. This theme has been an undercurrent in my work, particularly in my solo exhibitions Tender: Intimacy in the Digital Age and Anatomy of Desire. ‘Tender’ is a play on Tinder – the name of the ubiquitous dating app whose tag-line is, “Tinder is how people meet. It’s like real life, but better.” When I say that technology often replaces intimacy with immediacy, I’m referring to the ways in which our human experience has become mediated with digital skins. Our virtual world provides a seemingly quick fix in our search for meaningful bonds. When we feel alone, we can send a text, or search for a new connection, and receive immediate feedback. These transient cyber connections can be satisfying in the short term, but are not the same as face-to-face, voice-to-ear, skin-to-skin communication. There is a power and fragility underlying this desire for connection and hidden moments of contact. 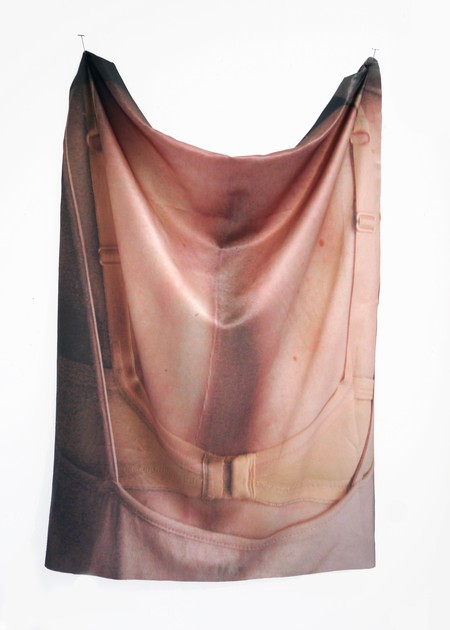 Your most recent solo exhibition, Feed Me Diamonds, featured numerous human-like sculptures that were encrusted with rhinestones, gold and glitter. Tell us more about this aspect of your artwork.

Ultimately, Feed Me Diamonds invites viewers to confront notions of narcissism, consumption, and instant gratification. In this exhibition, representations of fashion and decadence are commingled with references to illness, trauma and decay. These artworks explore the idea of saturation, and suggest that saturation is a manifestation of modern anxiety about Western-consumer culture. I became interested in the idea of ‘affluenza’ – a psychological malaise supposedly affecting wealthy young people. In my work, I started to treat accessories and symbols of wealth as a contagious infection of the skin. Throughout the exhibition, figurative sculptures are pock-marked with rhinestones which obscure their humanity. The title of the exhibition – Feed Me Diamonds – is an absurd proposition. It reflects an obsession and desperate desire for wealth and instant pleasure so strong, that someone begs to be fed diamonds with the hope that they will somehow merge with the core of their being and become a part of their identity. 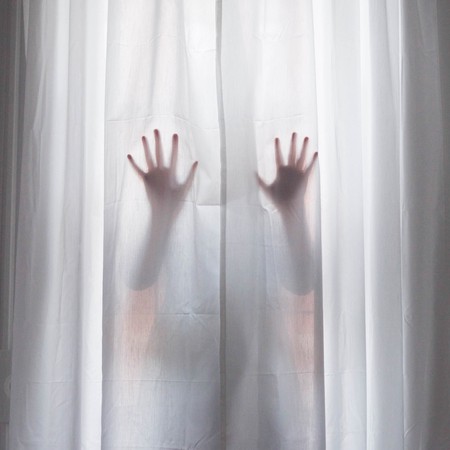 Human anatomy, skin and scars feature prominently in your work. Why does this subject interest you?

My work explores the human body as both physical surface and psychological landscape. Using imagery of human anatomy seems like an intuitive way to communicate about identity and intimacy because it is the locus of human experience. In many ways, skin is an elegant metaphor for many of the ideas that my artwork explores. Skin is an organ that covers the landscape of the body and blurs the boundaries between internal and external, and it conceals and reveals our mortality. Skin consists of multiple layers, each in a constant state of flux between synthesis and transformation. Skin not only lacks physical boundaries because it stretches from inside to outside of the body, but it is at once alive and dead. Mark C. Taylor writes, “Death, is not a momentary event but is an ongoing process whose traces line the body. At the point where I make contact with the world, I’m always already dead.” This is the place where life and death converge. Our body is at once familiar and strange. This junction of life and death also structures our relationship with the external world. 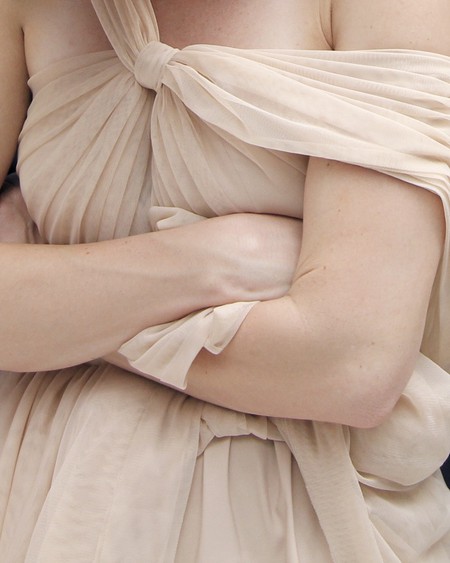 You create provocative images which depict fragmented figures – part animal, part machine – that are simultaneously unnerving and alluring and which defy easy categorization and gender identification. Tell us more about the role of fragmentation in your work.

My artwork operates in a space where contradictory ideas rub up against one and another, and I focus on the tension between control and release. My work often depicts abstract bodies that seem to exist in a space between containment and leaking. I use fragmentation as technique to render the familiar alien: ultimately the source image is distanced from its referent, and there is an elasticity between what is shown and what is understood. I incorporate fragmentation into my work because I’m interested in portraying people in their complexity through their incompleteness by using this technique. I’m also interested in the ways in which the collage process mimics plastic surgery. My studio is a kind of laboratory, where I use mixed media on Mylar to inscribe histories of violence onto hybrid bodies. Creating hybrid bodies in this way refers to scarification of the body, plastic surgery, prostheses, and pathology. 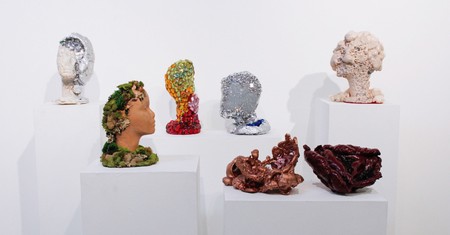 In the past, you’ve called your sculptures “Hungry Ghosts.” Why is that?

I think that the idea of the ‘hungry ghost’ relates directly to obsession and embodiment in contemporary society. In Chinese Buddhism, hungry ghosts were embodied spirits. The hungry ghost is not just periodically hungry, it is constituted by its ravenous pursuits and cannot escape its own body. Their embodiment is so much a part of them that it is also the locus of their misery. Historically, the hungry ghost was used to transform the unknown into a verifiable known. Invisible hungry ghosts were used to explain scientific processes that could not be otherwise rationalized. For instance, invisible ghosts were used to explain what happens during processes like oxidation. For me, these sculptures are hungry ghosts with diseased bodies that embody the specters of consumption, instant gratification, and guilty pleasures. This is not at all how the concept is traditionally used. I think of my sculptures as diseased by their embodiment and infected by the rhinestones that make up their skin. Their embodiment is their prison. For me, giving form to my ideas in this way is a kind of guilty pleasure.

You participated in the Bio Art Residency at the School of Visual Arts. The SVA Bio Lab sounds fascinating. Can you elaborate on your experience there and how bio art relates to your artwork?

Bio Art is an emerging field which incorporates the biological sciences into the plastic arts. I have always been fascinated by the intersection of art and science, and my artwork was deeply influenced by body architecture, biological surrealism and new technology. For instance, some of my sculptural work uses mixed media, paint and glitter to create human-like figures. During this residency, I grew actual crystals on animal bones. Not only did this process lead to the creation of sculptures, it also resulted in photographs of the crystals growing at the microscopic level. This residency allowed me to experiment with methods that are usually considered to be more scientific than artistic. This experience completely transformed how I view my art practice, and since then I have continued to incorporate scientific processes and new technology into my artwork. 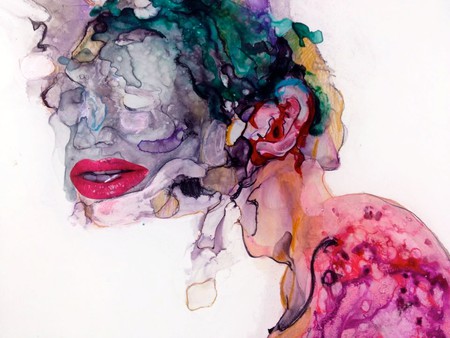 Let’s talk about the other aspects of your social practice. Can you explain your involvement in the Honey I’m Home! Project at Toronto’s 2011 Nuit Blanche Festival?

Honey I’m Home! was presented as part of The Nuit Blanche Contemporary Art Festival in Toronto in 2011. I was one of three young female artists who conceived, produced, and evaluated the project with the support of an extensive team of professionals and volunteers. This interactive film installation enabled the audience to co-create episodes of a situational comedy by playing the role of ‘father’ regardless of race, gender identity, sexual orientation or age, in an effort to disrupt both the genre of sitcom as well as the stereotypical notions of ‘family’ while engaging the audience and breaking new ground. Each Nuit Blanche guest was filmed in the partial TV studio set visible behind a glass façade while the live footage was inserted into pre-taped episodes of Honey I’m Home! and projected to the audience outside – confronting the viewers with an unusually cast ‘father’ in an otherwise traditional sitcom family. The production engaged more than 60 audience members in 60 five-minute film episodes created during a 12-hour exhibition period. Honey I’m Home! was attended by more than 500 viewers. In 2012, footage from Honey I’m Home! was displayed as an interactive gallery exhibition at Propeller Center for the Arts in Toronto. And in 2013, this project became the foundation of a research paper that we co-authored entitled, Honey I’m Home: Disrupting Traditional Gender Roles in SitComs, which was presented at the Eighth International Conference in Critical Management Studies in Manchester.

There are so many different facets to your work, and I have to ask, what are you working on these days?

Well, I was just awarded a studio space through Chashama’s studio residency program in Manhattan. Right now I’m really excited about having a new space to work in and am focused on creating new work. It’s been amazing to have a new space to work out of, since so much of my work is so large. I’ve got a number of different projects underway, but I am focused on creating work on silk and Mylar. I love working in these mediums because of their inherent delicacy, and I think it lends itself to dealing with ideas around intimacy. I once read that everyone has their own observational focal length – the distance at which they see and engage with the world. Some people go through the world with a wide vision, but I’ve always been someone who sees the world in minute detail, and I love trying to communicate that through my work.

Sarah Allen Eagen is a New York City-based artist originally from Toronto, Canada. She received her MFA from Parsons the New School of Design in 2013. Eagen has exhibited her work extensively in the United States and Canada. She has had solo exhibitions at Vitrina Gallery (New York, NY), BAU Gallery (Beacon, NY) and Chashama 461 Gallery (New York, NY). Her work has been featured in group exhibitions at The Kitchen (New York City), The Propeller Centre for the Arts (Toronto), the Nuit Blanche Contemporary Art Festival (Toronto) and at The Art Gallery of Ontario (Toronto). In 2013, she completed The School of Visual Arts Bio Art Residency, and in 2016 was awarded participation in The Chashama Studio Space Residency in Manhattan. Her artwork can be seen at www.saraheagen.com.