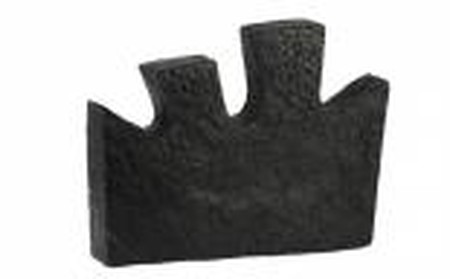 The work of American artist Louise Nevelson, one of the most significant sculptresses of the 20th century, has left an indelible mark on the history of art. Despite the multitude of influences that shine through her art, Nevelson’s work defies any specific art historical categorisation. The exhibition LOUISE NEVELSON. Creativity shaped my life in Frankfurt’s DIE GALERIE is a retrospective journey of the artist’s work in all its essential facets. 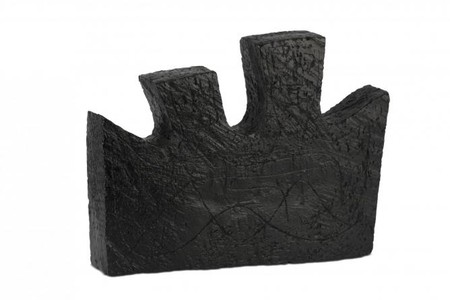 From a very young age, Nevelson was clear about her preoccupation with sculpture as a medium. ‘I want to be a sculptor. I don’t want colour to help me’ , the precocious Nevelson uttered at the mere age of nine, when her librarian asked her what she wanted to be when she grew up. Little did she know that this childhood determination would manifest itself even more stongly in adulthood. Louise Nevelson grew to be one of the most formidable feminist sculptresses, whose work has found place in many of the most renowned art collections worldwide.

Born in Kiev in 1899, her family moved to the USA in 1905, initially settling in Maine. In 1920, Louise married Charles Nevelson and made New York her home. Though married life never quite suited Nevelson, she found herself at home with her artistic environment in New York. She recalls, ‘My husband’s family was terribly refined. Within their circle you could know Beethoven, but God forbid if you were Beethoven’ . This distant spectatorship of the arts never suited Nevelson and soon after the birth of her son Myron, she separated from her husband. 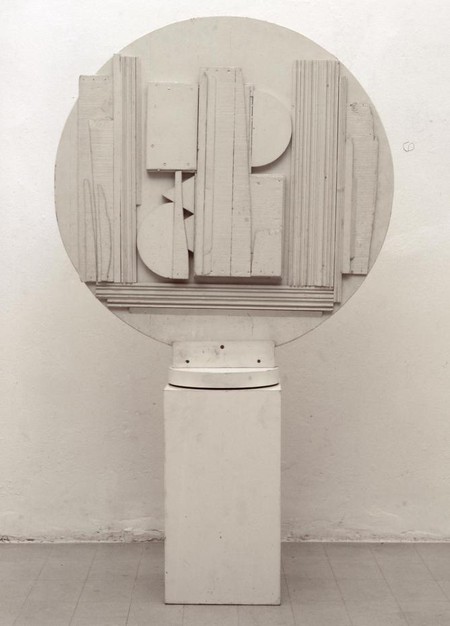 Ever since the separation Nevelson followed the beating rhythm of her ecstatic heart, which was always in pursuit of something big. In 1928, she joined the Art Students League, where she became familiar with the works of Pablo Picasso and Marcel Duchamp. She travelled through Europe, where she studied with Hans Hoffman in Munich. She assisted Diego Rivera on a mural project. She studied modern dance and drama. Nevelson cultivated a grandiose style that characterised both her appearance and her artistic practice. She wanted to be feminine and individualistic. She wanted to build an empire.

The Frankfurt exhibition is a journey through different periods in the sculptress’s life, where the multitude of influences that nourished her creative style are visible. Her early sculptural engagements with terracotta recall the influence of Pre- Columbian and Mesoamerican styles. 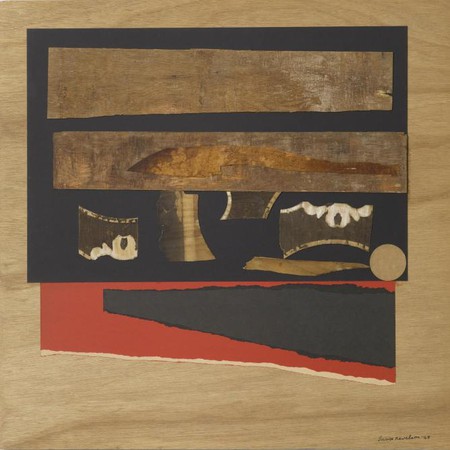 But it is the wooden assemblages, which piece together various found objects, for which Nevelson was most celebrated. These works have an almost magnetic pull and command the most attention. She believed what the creative person arrests is dependent upon their total history. Her engagement with wood was an integral part of her own personal history. Her father, when he first arrived in the USA, worked as a woodcutter and junk collector. Her childhood pastime of playing with scraps of wood embedded itself deeply into her subconscious and in the 1940s and 1950s she started creating her signature wooden monochromatic sculptures.

‘When I found cubism, it was like when some people find God, and I have never left it.’ Using all sorts of bric-a-brac scavenged from the streets of New York, the cubist preoccupation courses through Nevelson’s assemblages. By extending the legacy of Duchampian ready-mades and Giorgio de Chirico’s metaphysical interiors, she breathed new purpose into everyday objects. Despite the seeming haphazardness of the separate pieces of used wood, the conglomerate symbolises a unified whole, made possible by a monochromatic coat of paint that visually holds it together. The individual wooden objects eschew identification; they take on a poetic harmony that converts the mundane into the mystical. 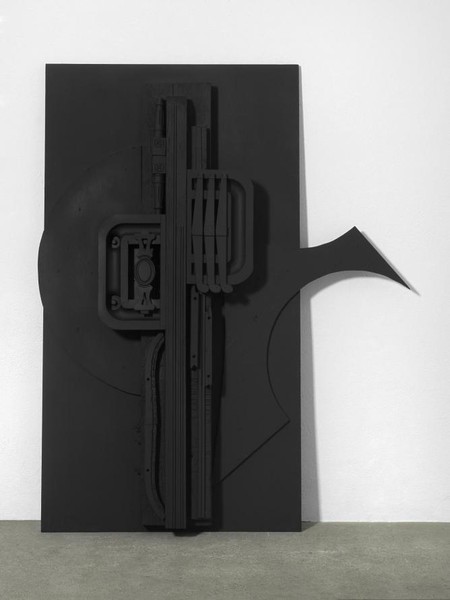 Nevelson’s choice of monochrome holds an almost sacral function that transmutes these assemblages into austere and meditative reflections. From 1953 till 1960, Nevelson painted her assemblages entirely with black. For her black was the most commanding colour that could convey harmony. ‘Because black encompasses all colours. Black is the most aristocratic colour of all. There is no colour that will give you the feeling of totality. Of peace. Of greatness. Of quietness. Of excitement. I have seen things that were transformed into black, that took on just greatness. I don’t know a lesser word.’ The exhibition features 20 of Nevelson’s black assemblages that bear testimony to her resolute confidence in what the colour could convey.

For Nevelson, black (nigredo) also represented one of the phases that defined the ephemerality of existence – that of death and an affirmation of mortality. During the late 1950s and early 1960s, she also extended this symbolism to encompass resurrection, visualised through white (albedo) monochrome; and spiritual ideality represented through gold (citrinitas). In the exhibition, these three phases can be seen to coexist and symbolise the finite nature of being. 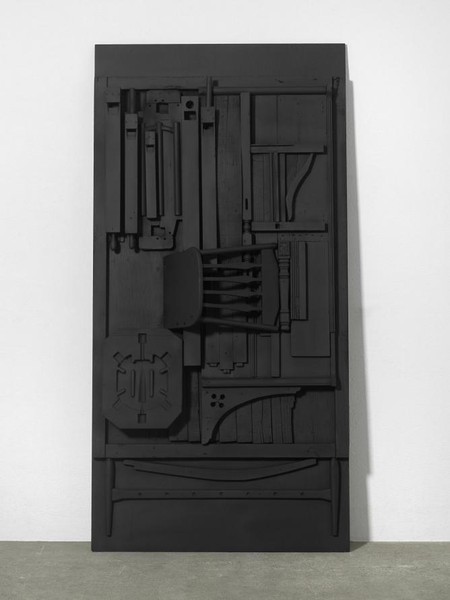 The early assemblages of the 1950s are contained within box shaped forms, which so clearly define the space to which the miscellanea are so clearly devoted. The sculptures of this period are reminiscent of the American Surrealist Joseph Cornell’s curio-boxes. They convey a sense of dramatised intimacy that is heightened by the play of shadows. But her later works from the 1970s break out of the shackles of restriction within the box, to pursue a dialogue with the surroundings.

The exhibition also pays homage to an often understated, but very integral part of Nevelson’s oeuvre – her collage works. These works, though more visually subtle than her monumental assemblages, act as playground for experimentation. She permits spontaneity and the interplay between multiple media such as metallic foil, wood and paper to create a relief-like characteristic. Unlike her sculptures, which are austere and meditative due to their monochromatic nature, Nevelson introduces occasional additions of colour into the picture plane.

Louise Nevelson’s work reflects her persona: bold, larger than life and fiercely individualistic. Throughout her 90 years of life, she rejected conventions and created an independent path in a predominantly male-dominated field. As she declared assertively, ‘Women used to be afraid. Well I wasn’t afraid. I felt like a winner. I am a winner.’ 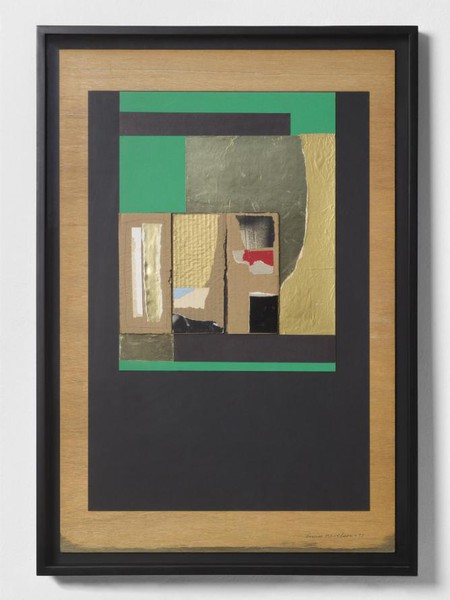 ‘Louise Nevelson. Creativity shaped my life’ is on view from 5 June to 6 September 2014 at DIE GALERIE, Frankfurt am Main, Germany. The exhibition is accompanied by a synoptic exhibition catalogue, which includes text by the artist. For further information please access the gallery website.