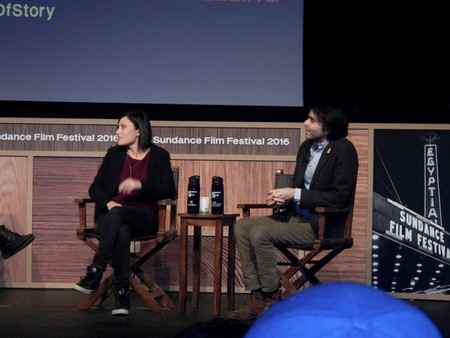 Impolex follows the journey of a young, handsome U.S. soldier by the name of Tyrone S. (played by Riley O’Bryan) who is assigned to the United States Army’s ‘Operation Paperclip,’ in which he must locate and retrieve undetonated German V-2 rockets. During his mission, Tyrone encounters a plethora of bizarre figures, from a talking octopus to an apparition of his girlfriend.

Perry’s second feature, The Color Wheel, is ironically presented in a stark, black and white monochrome composition that intensifies the odd psychosocial tensions that build between siblings. Carlen Altman plays older sister J.R., while Perry himself plays her younger brother, Colin. J.R. is suffering from the aftermath of a breakup and asks Colin to retrieve her belongings from ex-boyfriend Neil’s apartment. The short, shared road trip to retrieve J.R.’s things brings these two estranged siblings together, and forces them to confront their circumstances over the course of this infuriating expedition.

Listen Up Philip, Perry’s third feature, premiered at the 2014 Sundance Film Festival. Starring Jason Schwartzman as Philip and Elisabeth Moss as Philip’s girlfriend, Ashley, Philip’s budding success and fame expose his self-absorbed and arrogant qualities. While waiting for his sure-to-succeed second novel to come out, Philip’s discontent drives him to complete misery; he becomes irritated with crowds and the city’s noise, his relationship with Ashley deteriorates, and he becomes obsessed with promoting his work. He finally takes refuge at the summer home of his idol, Ike Zimmerman, where he finds peace through self-reflection.

Perry’s fourth film, Queen of Earth, was a tremendous success at the Berlinale in 2015. Elisabeth Moss from Mad Men stars as Catherine alongside Katherine Waterston as Virginia, in a story about two childhood friends who find themselves in something of a dilemma. Catherine, an emotionally fragile woman, has recently lost her father, and shortly afterward, her boyfriend ends their relationship. Virginia offers Catherine her family lake house as a sanctuary in her time of need. While recuperating at the lake house, these two women who grew up together discover that they have drifted apart.

Currently, Perry is engaged in two new projects: Don DeLillo’s The Names, and a rendering of the classic story, Winnie the Pooh. Perry is writing the screenplay for this animated film, which is sure to be a refreshing challenge juxtaposed with his previous works.