A Walk Around Brooklyn in 21 Perfect Instagrams 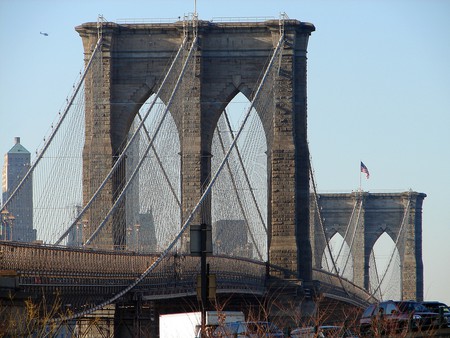 It’s not often that tourists cross the river from Manhattan to Brooklyn—but those who do find a cooler, more laid-back unforgettable vibe. For travelers who are new to the city and want to venture off the beaten path (or for locals who are just trying to rediscover the borough), we planned out a walk that hits up some of the best spots in Brooklyn. From the trendy streets of Williamsburg to the historic institutions along Eastern Parkway, this itinerary is a “best of what’s best” guide to BK. Get your walking shoes ready.

Start your tour of Brooklyn in the footsteps of Manhattan. DUMBO (Down Under Manhattan Bridge Overpass) is not only one of the most picturesque neighborhoods this side of the river, but it’s also got the best views of the city skyline bar none.

A walk in the park 👣 #dumbo

Work your way up north around the water and through historic Brooklyn Heights to see some of the most charming townhouses in the whole city—colorfully painted walk-ups on streets with real gas lamps just steps from the river. You’ll quickly understand why it’s one of the most coveted real estate spots around.

Keep walking until you reach Williamsburg. Wandering through the coffee shops, cafés, and boutiques is one of the best ways to spend a Sunday afternoon in the city.

Nothing can turn a day around quite like chicken and waffles. Stop at this Williamsburg eatery for one of the trendiest plates in town.

Drizzlin’ @sweetchicklife⠀ ⠀ Read about our visit on the blog (link in bio).

No trip to Brooklyn is complete without a stop at the borough’s iconic outdoor food market, Smorgasburg.

Stop for a drink at the Wythe Hotel, and stay for unobstructed views of Manhattan.

The view from The Ides, the sixth floor cocktail lounge at Brooklyn's Wythe Hotel. It’s conveniently placed right across the east river and on the same street as the Brooklyn Brewery, making somewhat of a pub crawl from heaven // Photo by @nick_fotograph

A post shared by National Geographic Traveller (@natgeotraveluk) on May 15, 2017 at 1:26am PDT

Vintage clothing hunters can find some of the city’s best treasures at any one of the multiple clothing resale places in Greenpoint. Spend a few hours perusing the stockpiles of oddities and antiques up and down the blocks.

Keep working your way through East Williamsburg until you reach the artists’ den of Brooklyn, Bushwick.

Be sure to wander through the streets admiring all the murals.

Work your way south through one of Brooklyn’s most charming neighborhoods, Clinton Hill. The neighborhood may be a bit on the sleepier side, but there are still plenty of parks, cafés, and great spots for families.

Catch up on Brooklyn culture at BAM, the Brooklyn Academy of Music.

Happy Mothers Day to all the moms out there(and single fathers too!)

Our visitors are so en pointe. On your next visit, explore and express yourself like @julietdoherty and the @ballerinaproject_ and share your beautiful shots with us using #mybkm. You may end up on our feed!

A stroll down Eastern Parkway’s tree-lined walkways is one of the most picturesque ways to cool down once temperatures start to rise.

The historic Kings Theatre is one of the absolute best places in town to see live music. Not only does sound soar throughout the theater, but it also has one of the most beautiful façades around town. If you have tickets to a show, be sure to get there early so that you have time to take in the awe-inspiring architecture.

When good New Yorkers die, they go to Green-Wood. The surprisingly picturesque cemetery is the final resting place of some of New York’s most famous residents, including Jean-Michel Basquiat, Leonard Bernstein, and “Boss” Tweed.

The people who live here have the best views.

One of the best spots in the city for families is Park Slope. Walk down Fifth Avenue for some great shopping and up and down the smaller streets to see historic brownstones covered with vines.

End your tour of Brooklyn in one of the borough’s more industrial, artier spots. Red Hook has got cool warehouses, booming construction, and unparalleled views of the harbor, including the iconic Statue of Liberty. (Plus, there’s an IKEA.)