A Sacrifice For Freedom: The Story Of The Battle Of Brooklyn 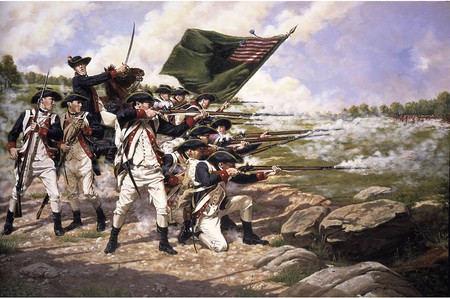 Heavy winds barreled along the East River during the final days of August 1776, and a stretch of looming clouds signaled a nor’easter. On Staten Island, thousands of British and German mercenaries boarded hundreds of frigates and prepared to cross the Verrazano–Narrows. Their mission was to crush a fledgling rebellion. General George Washington, with his meekly trained and poorly equipped troops, was already entrenched along the shores of Brooklyn, and poised to face the mighty forces of King George III. This was the first engagement the Continental Army would fight as free men. Delve into the fascinating story behind the historic Battle of Brooklyn.

Nearly two months before, in July 1776, the Committee of Five ratified the Declaration of Independence. Up until then, many — including some in the Continental Congress — believed that even after the war they would reconcile with King George III, to whom many colonists had remained loyal. However, this ‘declaration’ promised that under no uncertain terms would the colonists live as willing subjects, but rather as independent states, completely free from the British Empire. 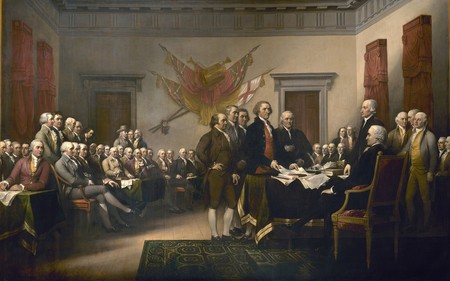 In response, British General William Howe was issued incontrovertible orders to annihilate the rebel forces and eviscerate any will for revolt. Howe was granted any forces at the crown’s disposal to fulfill this task. Hessians (German mercenaries), Scottish Black Watch Brigades (named for the black kilts they wore), and a fleet of warships commanded by Admiral Peter Parker combined to make a contingent of nearly 20,000 soldiers and seamen. In addition, when word got back to the colonists that the British intended to use foreign troops, even the loyalists knew they had reached a precipice with the king.

A decisive victory in New York City would have a dramatic impact for either side. The Hudson and East Rivers were major commerce and supply routes. A victory for Howe and his ‘Redcoats’ would essentially cut the colonial rebellion in half, isolating its northern and southern regiments with little possibility for reinforcement. Psychologically, a strategic win in New York City would serve to swell the ranks of Loyalist Regiments that were forming throughout the state. Colonials who remained loyal to the crown were already immersing themselves among groups, from tavern to tabernacle, in order to send information back to the British. 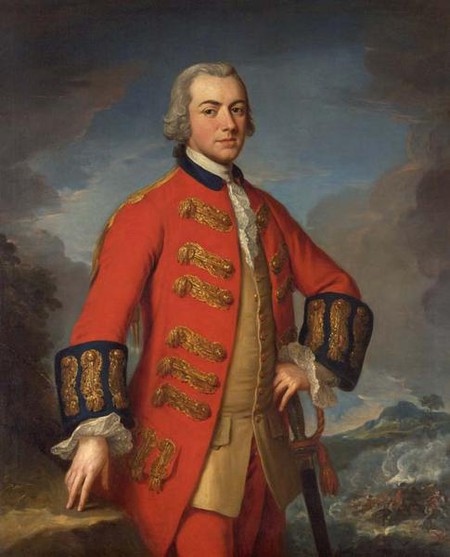 The American forces were severely outgunned. With full French assistance slow in coming, the colonials possessed no heavy artillery or navy, and because muskets were highly inaccurate, they required multiple lines of fire to be effective, leaving Continental troops lacking in numbers and discipline to match British forces in open combat. The stage was being set to trap Washington’s army, and to launch one of the bloodiest battles of the Revolutionary War.

From the start, Washington’s forces were stretched thin. He ordered General Henry Knox to build a battery of guns (which is how the Brooklyn Battery got its name), but unfortunately it was facing the wrong direction and would have little effect on the battle. When the British landed in Brooklyn Heights on August 27th, they easily overcame the Americans at Gowanus Pass. This allowed Howe’s troops to completely outflank the entire Continental Army.

The colonials were caught by surprise and forced to fight with their backs to the East River, leaving them vulnerable to attack from the British Navy. The Americans were saved only because the high winds prevented Admiral Parker’s fleet from sailing further into New York Harbor. Yet, at Denyse’s Ferry Landing, 500 Americans faced nearly 15,000 Redcoats. 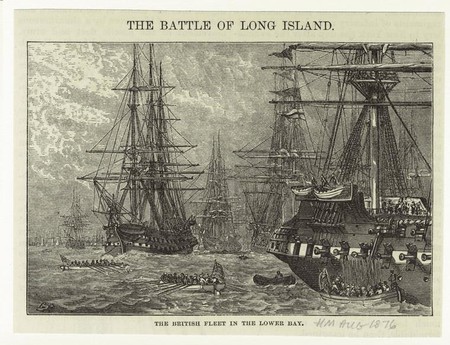 The British fleet in the lower bay 1876 | © Harper Brothers/WikiCommons

The expected nor’easter descended upon what was once a rural landscape in Brooklyn. Driving rain-gusts soaked the terrain, and fallen soldiers lay nearly absorbed into the thick mud. The smell of gunsmoke drifted through the air for miles, as residents watched in horror through their windows. The Americans fought with incredible valor and extreme sacrifice, even to the admiration of General Howe, but they were faced with the prospect of defeat. Washington was left with only the option of retreat, which was often a costly endeavor in itself.

A daring escape was planned under the cover of darkness. John Glover and his Marbleheaders — merchants by trade — along with the Massachusetts 27th Regiment led by Israel Hutchinson rowed the Continental Army across the East River, in silence, into Manhattan. Though it was a retreat, this was a brilliantly executed maneuver that saved the lives of thousands of colonial soldiers.

With the Continental forces split in two, still more troops needed to be evacuated. The Marylanders, led by John Haslet, and the Delawares, commanded by William Smallwood, were surrounded by British and Scottish Black Watch troops. Mordechai Grist volunteered to make a stand at what is now known as Old Stone House in Park Slope. Four hundred men guarded the retreat of thousands in an epic battle against 5,000 enemy troops. All but eight, one being Grist, were killed. A marker remains at a mass grave where 256 unknown soldiers were buried. 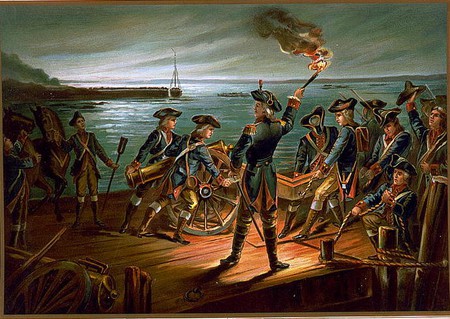 Despite their efforts, on September 15th, the British captured New York City. Although the Battle of Brooklyn ended in defeat for the colonials, their bravery and sacrifice against overwhelming odds became forever symbolic for the Americans throughout the rest of the war, and eventually in the founding of a nation. Their courage and valor embodies the guiding principles of a United States in that it is better to perish as freemen than live as subjects to tyranny.