An exhibition at the New-York Historical Society of paintings, posters and artifacts marks the centennial of the USA entering World War I. It’s a powerful display of work by artists such as John Singer Sargent and items encountered everyday on the battlefield.

Gassed is an unusual John Singer Sargent painting. The subjects are neither rich nor elegantly dressed. Sargent’s characteristically sharp focus is hazy to point to the gas-poisoned air that temporarily, or permanently, blinded the staggering soldiers. The realistic, heavily symbolic Gassed is the largest image in W​orld War I Beyond the Trenches​ at the New-York Historical Society (NYHS).

The war to end all wars

An expansion of The Pennsylvania Academy of the Fine Arts 2016 exhibit, World War I Beyond the Trenches illustrates America’s reluctant 1917 entrance into World War I through the national soul-searching which followed the 1918 Armistice and beyond. President Woodrow Wilson was inaugurated for a second term in 1917 for maintaining neutrality. American calls for intervention began in 1915 after a German submarine sank the British ocean liner Lusitania. Among the 1,198 killed were 128 Americans. Winsor McCay’s animated short documentary The Sinking of the Lusitania (1915-1918), is available for viewing in the galleries on a continuous loop.Effective propaganda, McCay’s disturbing cartoon makes Cameron’s Titanic appear more shallow than it already is. What did lead to America’s first involvement in a global conflict was the promise of a German-Mexican alliance outlined in The Zimmerman Telegram.

World War I Beyond the Trenches does not celebrate “The Great War”. The 55 works are divided into sections “Debating the War”, “Mobilization”, “Waging War”, and “Celebration and Mourning.” Alongside them are timelines concisely chronicling key events—for there are many. WWI began in 1914 with the assassination of the heir to the Austro-Hungarian Emperor Archduke Franz Ferdinand and his wife Sophie. This pitted related royal households against each other, killing 38 million of their subjects. The war further weakened Czar Nicolas II, whose ineptitude the Bolsheviks took full advantage of to start The Russian Revolution.

Along with the use of poisoned gas, WWI is responsible for other firsts. Among them are the use of planes and tanks as weapons of mechanized warfare, barbed wire for securing territory and trapping enemy troops, and America’s emergence as a global power. US nation building too had a heavy price: 116,000 soldiers were killed and an estimated 200,000 wounded. The Senate’s rejection to join The League of Nations not only broke Wilson politically and physically, it also helped accelerate World War II. 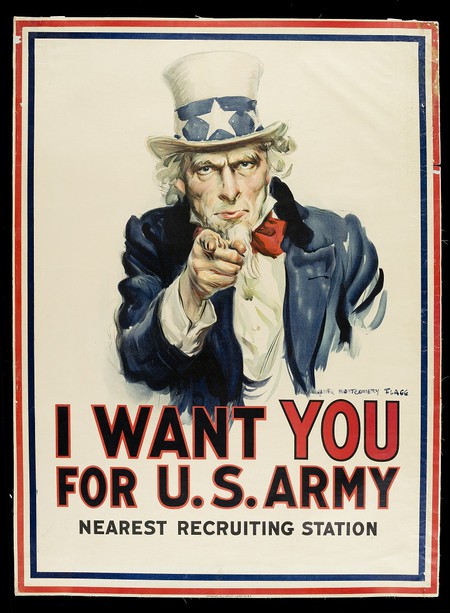 Propaganda posters, sheet music, uniforms, and a gas mask are located throughout NYHS’s main lobby. There is also a large-scale diorama deploying NYHS’s newly-acquired Robert C. Postal Collection of Toy Soldiers. They are presented in a scene which encapsulates the “great adventure” soldiers were drafted into—from landing in France, through battlefields (cotton balls simulate cannon and gun fire), gutted buildings, to medical and supply trucks.

Then there are the letters written and illustrated by soldier and sign painter Salvatore Cillis. The Italian immigrant and Washington Heights resident’s recollections are a miniature autobiography (he died in 1966) beginning with the parade on the day he left for training camp and ending with his survival of the 47-day Battle of the Argonne Forest (September–November 1918). The last letter depicts Cillis dreaming of The Statue of Liberty and saying, “We all want to come home quick.” 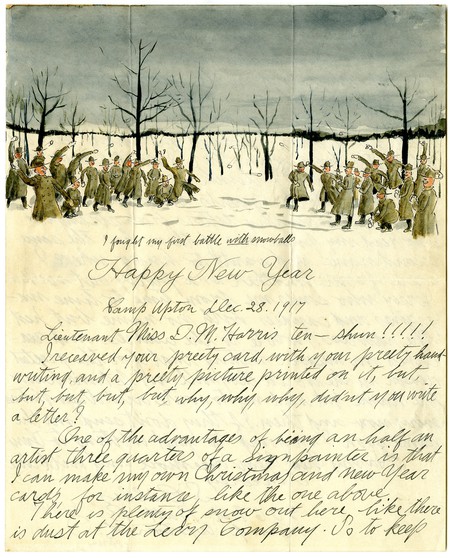 Sargent’s Gassed, on loan from London’s Imperial War Museum, is displayed in New York City for the first time. During the war, Sargent was a war artist for the British Ministry of Information; several sketches he made for them are also part of the exhibit. Edward Steichen was an aerial photographer for the American Expeditionary Force. A few photos are presented, along with his observation: “I could not deny to myself having played a role in the slaughter.” 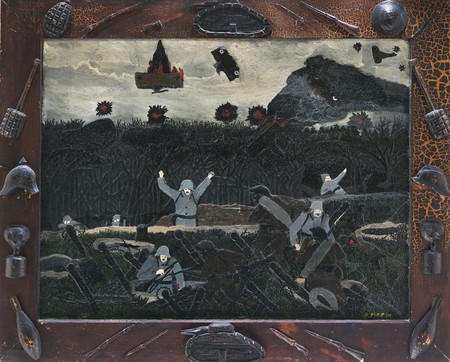 Horace Pippin, a self-taught artist, belonged to the 369th Infantry known as “Harlem’s Hell Fighters”. Pippin lost the use of his right arm after being shot; he managed to start painting again by using a poker to hold up the wounded arm. His work alone makes The End of War: Starting Home a worthwhile visit.

Pippin’s mixed-media work is the exhibition’s central voice. The artist shows the segregated, decorated unit capturing German soldiers while enduring heavy fire. The Hell Fighters are blended deliberately into the trench; their bodies are akin to those on Greek friezes and their guns form something akin to barbed wire. Along the frame Pippin constructed, are objects—tanks, bombs, knives, helmets—he encountered in the war. The items are arranged no differently to mementos glued to a family scrapbook page, only they hint at memories unforgettable for other reasons.