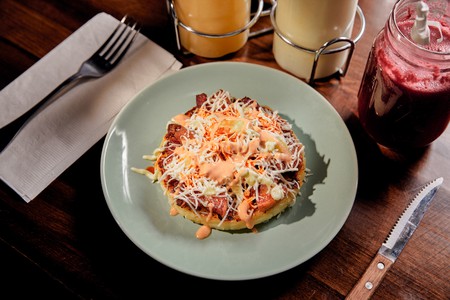 There’s no better way to experience Queens’s complex, vibrant food scene than by boarding the 7 train, the subway line that connects one end of the borough to the other.

New York City’s largest borough is home to a melting pot of the world’s cuisines. Here, the 7 train rumbles past the skyscrapers in Long Island City to the peddlers hawking plates of dumplings in Flushing. The line is fondly referred to as the International Express, and with great reason: a mere $2.75 will transport you to stops where you can indulge in authentic meals from India to Thailand to China and Colombia. 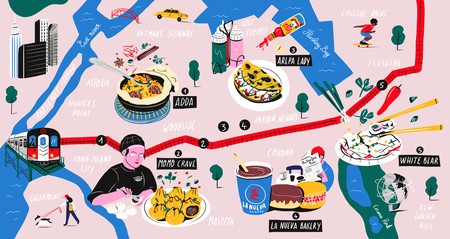 Queens has long been a hub for immigrant communities, who helped transform the borough into a global culinary destination: Flushing for Chinese food, Elmhurst for Thai, Jackson Heights (the most culturally diverse neighborhood in the world) for Indian. The best way to experience the vast food scene is to fill up your MetroCard and hop on the elevated 7 train, stopping off at the following restaurants, storefronts and bakeries for unforgettable dishes while exploring singular corners of the city. 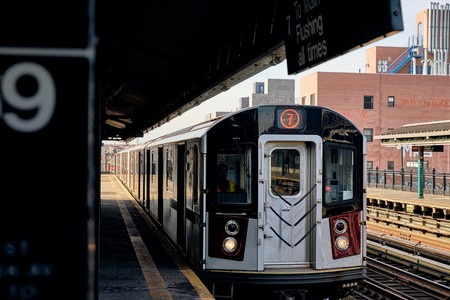 Adda is perched on Thomson Avenue, a sleepy stretch between the bustling chaos of Long Island City and the more muted, residential section of Sunnyside. But it’s here in this casual, narrow restaurant that regional Indian cuisine shines. 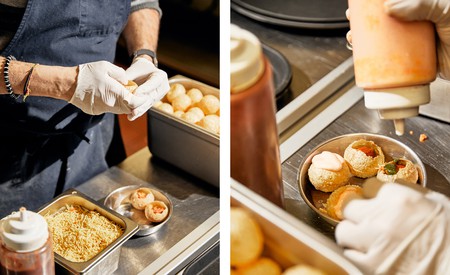 The hotspot comes from Roni Mazumdar and Chintan Pandya, the same duo behind Rahi, an Indian restaurant in Greenwich Village. At Adda, the kitchen churns out an array of Indian comfort food. There are plates you might be familiar with, like red-stained tandoori chicken, coupled with the exotic and esoteric, like bheja fry: goat brains resembling soft scrambled eggs, whisked with ginger, red onions and chili and paired with plush pao (Indian buttered rolls). 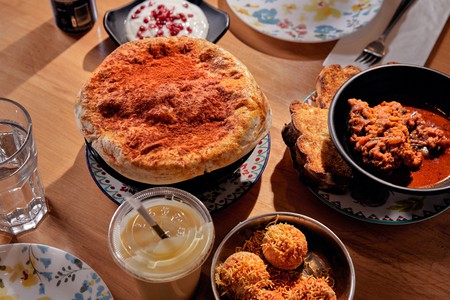 The delicate cubes of paneer are curdled in house, often found bobbing in fenugreek curry or swiped with a touch of garlic. Hunks of butter chicken emerge glistening and wonderfully tender, swimming in makhani curry. And the lucknow dum biryani is a crowd pleaser — an enormous pot filled with basmati rice, saffron and slow-cooked goat and sealed beneath dough that’s crisped up in the oven. It arrives to the table looking like a drum, ready to be sliced into.

At Momo Crave, a small kitchen shuttles out paper bowls teeming with carefully pleated dumplings. But these dumplings are not the sort you’d find at dim sum. These are momos, a South Asian dumpling native to Tibet, North India and Nepal. 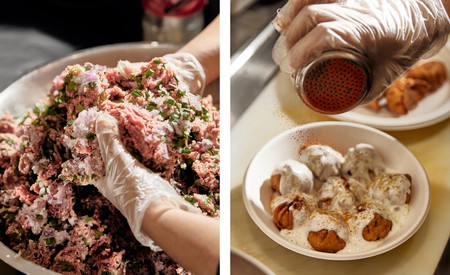 The quaint storefront is run by two Nepalese friends, who fuse the landscape of Nepal with the reaping of Queens. Momos are often merely steamed – a basket of translucent orbs slathered in fiery chili oil – but here, momos are a confluence of the borough’s extensive culinary scene, a blending of Indian, Mexican and Nepali influences, woven together into one complex tapestry.

Chaat, a savory Indian street food, gets transformed into momo form. These deep-fried momos, jammed with beef or chicken marbled with spices, swim in sweet yogurt, tamarind and green chutney. Crackly yellow banana chips are tangled on top like a pile of coins, flush with nubs of sev (crunchy noodles). 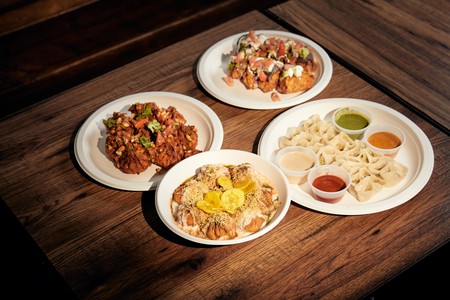 There’s obvious influence from Mexico, thanks to the wealth of carts peddling tacos under the 7 train. The kitchen has dreamed up taco momos, crafted out of deep-fried dough masquerading as crunchy taco shells, dotted with alternating layers of sour cream, black beans, guacamole and salsa.

And there are Nepali momos, of course, some coated in chili paste and hidden under a fistful of roasted soybeans, others swollen with water-buffalo meat or simply chicken shot through with chives.

The Arepa Lady is, in fact, a lady. Her name is Maria Piedad Cano, and she is a Colombia-born former lawyer who for decades could be found flipping arepas at her cart in the shadow of the 7 train, passing hot disks of corn dripping with mozzarella to neighborhood locals who knew where to find her. 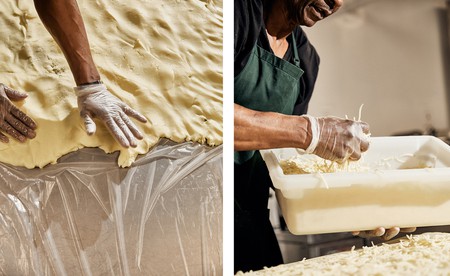 Nowadays, Cano’s sons have opened a brick-and-mortar restaurant in Jackson Heights, cooking up the same arepas she made at her far-flung cart on Roosevelt Avenue. The space is simple and unadorned, strewn with brown tables and chairs, but it buzzes with a cacophony of Spanish and English and the sizzling of corn slapped against the grill.

Here, the menu is split into four different sections for arepas. The arepa de queso is a dense puck of corn stuffed with cheese; the arepa de choclo is a flatter ring of golden-brown marbled corn, folded over into a half moon; arepa rellenas are closer to a sandwich (cheese and meat hugged by two crisp corn cakes); and the arepa de tela, made from cornmeal, provides a crunchier base. 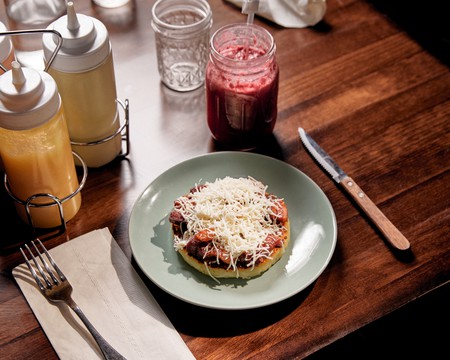 Each arepa can be topped or filled with cheese, chorizo, chicharron, carne asada, pollo asado or shredded beef, and arrive at the table with a heavy showering of queso. A cart of three colorful squeeze bottles is placed beside you, too, available to drench arepas with green garlic aioli, ketchup swirled with mayonnaise and sweet blitzed pineapple.

On restaurant-thronged 37th Avenue sits La Nueva Bakery, a family-run Uruguayan bakery. The large space is flanked by cases filled with Argentinian, Uruguayan and Colombian pastries, as well as a dizzying selection of Italian cakes. Behind the counter are boxes brimming with squat squares of pan de queso and skinny batons of golden-brown bread, repeatedly fetched and replaced from the kitchen by the staff. 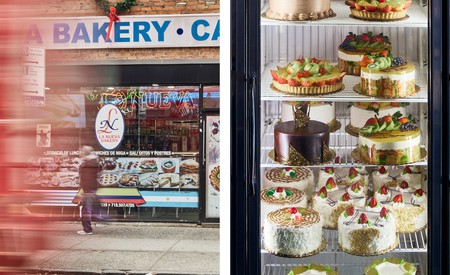 Flaky shells are piped with sweet dulce de leche; empanadas are jammed with meat and cheese and sealed with a braid | Zack DeZon / © Culture Trip

For something a little less sweet, there are wonderful empanadas, scorched on top, glistening from the egg wash, and sealed with a tight braid, palmable half-moons packed with meat and cheese.

Once you’ve made a selection (pastries and baked goods are gloriously cheap so it’s worth stocking up on several different kinds), join the locals at one of the many tables to savor your bounty.

The end of the 7 train deposits you in Flushing, home to a Chinatown far more diverse and culinarily ambitious than Manhattan’s shrinking iteration. Just a block from the subway station is an unassuming sliver of a space, crowded with exactly five tables.

Welcome to White Bear. A menu in Mandarin is affixed to the wall – scrawled with a laundry list of wontons, noodles, rice cakes and bean curd – with some offerings occasionally translated into English. In the teeny kitchen behind the counter, two chefs roll and stretch out dough, shaking pans and slipping noodles running with oil onto plastic plates. 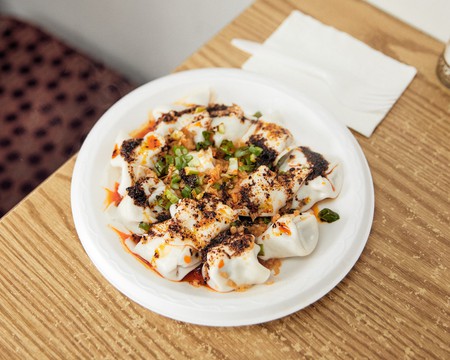 If you walk in and pause for even a few seconds, the chefs will brusquely bark at you: “Number 6?” They’ve guessed correctly, of course. You are here for the wontons slick with chili oil, a plate of 12 steamed translucent rounds packed with pork and daubed with clumps of blackened chili oil and bits of pickled vegetables.

These white globes are often quickly devoured and quite filling, but you can also purchase a sack of nearly a hundred frozen wontons, to be warmed up at home when you simply need a taste of Queens. 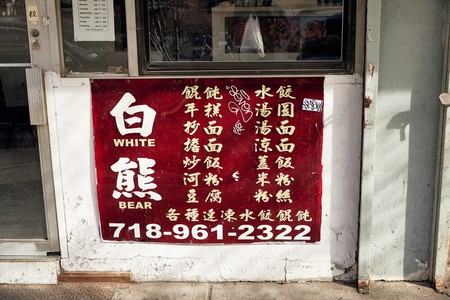