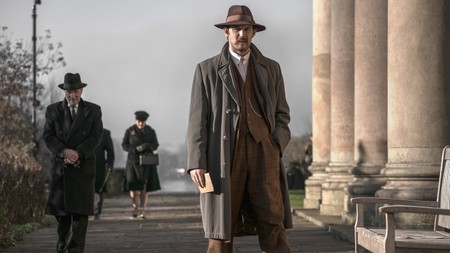 In The Last Witness, a dogged British newshound played by Alex Pettyfer discovers that Stalin’s Russia concealed its wartime executions of 22,000 Poles.

There was nothing new in last March’s attempted murder, probably by Russian agents, of the former MI6 informer Sergei V. Skripal and his daughter Yulia with the use of military-grade nerve agents. They follow the London assassinations by poisoning of the Bulgarian dissident writer Georgi Markov in 1978 and of the former FSB agent Alexander Litvinenko in 2006. The less publicized hanging of Ivan Krivozertsev, near Bristol in 1947, is a focal point of the effective new British thriller The Last Witness.

The movie theorizes that Mikhail Loboda (the name Krivozertsev went by in Britain) didn’t hang himself but was throttled by an agent of the NKVD (the Russian secret police) and then hung by the neck from a tree to make his death look like a suicide.

Though Loboda was a barely literate farmworker, he had, in May 1945, given a highly articulate statement to a former London consular official of the Polish government at a displaced persons camp at Verden (Aller) in Germany. Loboda described how he had witnessed NKVD-guarded Polish prisoners from Smolensk digging trenches—shortly to be their graves—in Katyn Forest in March 1940. He also heard shots in the forest and knew that the prisoners had not returned.

Loboda’s detailed evidence proved beyond a doubt that the NKVD—not the German army, which arrived in Katyn in 1941—was responsible for the killings of 4,000 Polish officers and others at Katyn. The death toll from Katyn and associated murder sites at this stage in World War II eventually amounted to 22,000 members of the Polish intelligentsia. This ventured genocide was authorized by Stalin to destroy the Polish state.

The Last Witness‘s Stephen Underwood, a reporter on a small local newspaper in the Bristol area, stumbles on the suicide by drowning of a soldier from an internment camp for displaced Poles. An unfulfilled sleuth frustrated by the assignments given to him by his conservative editor, Frank Hamilton (Michael Gambon), Stephen has a copy of The Big Sleep on his desk in his rented room. This might be a nod to the mysterious watery death of the Sternwood family’s chauffeur in Raymond Chandler’s novel, since the Pole’s suicide is only tangentially linked to what Stephen discovers about Katyn.

The drowned man leads Stephen to the nearby internment camp for displaced Poles where he discovers the presence of Loboda (Robert Wieckiewicz, who played Lech Wałęsa in Andrzej Wajda’s 2013 biopic). Suspicious of Loboda’s stewarding by a Polish liaison officer (Will Thorp), and why a Russian should be residing at the camp, Stephen breaks into the Nissen hut where Loboda sleeps and steals a journal he keeps in a tin box. It contains an account by a Polish soldier of his transportation to Katyn; it tails off shortly before he was executed. Loboda had taken it from the corpse’s decomposing body when he was hired by the Germans to help uncover the mass grave.

Realizing that Russian responsibility for the Katyn killings has been suppressed, Stephen tries to build a case, which puts him at risk of being murdered by British security forces anxious to preserve the post-war accord with Russia. Hamilton won’t have any truck with Stephen’s proposed story; privately, Hamilton might have pangs of conscience.

His investigation depends on the trustworthiness of his girlfriend Jeanette (Talulah Riley), whose estranged husband (Henry Lloyd-Hughes) is a ruthless British security chief anxious to obliterate any evidence Loboda produces. Fearful for Stephen’s safety, Jeanette makes a tragic mistake involving a talismanic apple. The orchard-wood where it comes from turns into a locus of death—and thus invoked Katyn itself. 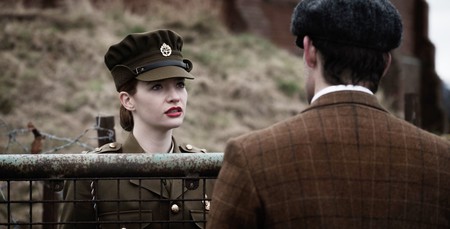 Directed and co-written (with Paul Szambowski) by TV veteran Piotr Szkopiak, whose maternal grandfather was executed at Katyn, The Last Witness initially comes on like a episode of Foyle’s War. That’s a compliment rather than a criticism: Anthony Horowitz’s famous detective series starring Michael Kitchen excelled at rooting wartime and postwar matters of national security in small-town crimes. The Last Witness does the same: the shadow of Katyn never being obscured by the domestic story involving Stephen, Jeanette, and Stephen’s newspaper.

And as the movie proceeds, it shrugs off its televisual atmosphere and pacing, becoming a brooding and increasingly fatalistic noir in which Stephen’s opportunities for disclosing what he knows diminish until there are none left. The film’s climax is shocking. Jeanette’s striving for redemption is also unexpected.

Pettyfer’s Stephen is no Chief Inspector Foyle or Philip Marlowe to be sure, but he makes up for his lack of shrewdness with pigheadedness and integrity. Dourness personified, his mouth hidden by a bushy moustache, one eye socket scarred, his cloth cap and check coats weirdly archaic, he is a man without charm or wit, but a blunt, taciturn lone wolf operator. At one point, he has a meeting with a jaded secret service drone (Ian Midlane, wonderful)—albeit in London, this is Chandler’s milieu and Pettyfer fits into it perfectly.

Stephen intrigues the viewer precisely because he makes no effort to be ingratiating. Unable to serve on the front in World War II, and carrying a chip on his shoulder because his brother served as a captain, he would have made an excellent protagonist of a wartime TV series of his own.

The Last Witness will be released on VOD and Digital HD on May 29.