A Brief History of the Pinstripe Bowl 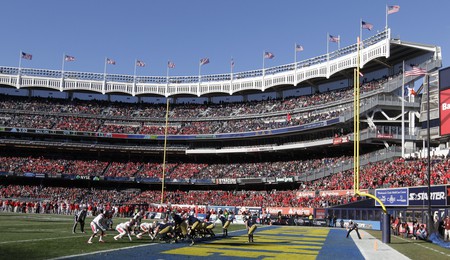 Yankee Stadium is, of course, home to the New York Yankees. While the stadium located in the Bronx is home to the most successful team in Major League Baseball history, it can also adapt for other visitors and sports as well.

The facility has been home to New York City FC of Major League Soccer since 2015, and has hosted the Pinstripe Bowl, an annual NCAA Division I football bowl game, since 2010.

The Pinstripe Bowl was the brainchild of Yankees’ then-minority owner Hal Steinbrenner, as well as then-New York City mayor Michael Bloomberg, then-Big East commissioner John Marinatto, and then-Big 12 commissioner Dan Beebe. The bowl game, first announced on Sept. 30, 2009, would be the first college football bowl game held within NYC since the 1962 Gotham Bowl, a game played between the University of Nebraska and University of Miami at the original Yankee Stadium.

With the constant shuffling and alterations to the NCAA conferences, the Pinstripe Bowl has changed as well, now associated with teams from the Atlantic Coast Conference (through 2019) and the Big Ten Conference (until 2021); a relationship that began in 2014.

In 2017, Boston College and University of Iowa meet on Dec. 27. It is the second Pinstripe Bowl appearance for the Eagles, and the first for the Hawkeyes.

Here’s a look back at these games played at Yankee Stadium.

Syracuse defeated Kansas State 36-34 in front of 38,274 spectators at the inaugural Pinstripe Bowl. Adrian Hilburn scored a touchdown to get the Wildcats within two points with 1:13 remaining, but was penalized for unsportsmanlike conduct for celebrating. Kansas State’s two-point conversion, now from the 17-yard line after the 15-yard penalty, failed. The NCAA later changed its rules regarding touchdown celebrations because of this incident.

Rutgers, located in nearby New Brunswick, N.J., defeated Iowa State 27-13 in front of 38,328. Redshirt freshman running back Jawan Jamison was named the game’s MVP after rushing for 131 yards and two touchdowns on 27 carries.

Syracuse, the Big East co-champion, defeated West Virginia 38-14 in front of 39,098. The Orange utilized a 23-point third quarter to build a 35-14 advantage that was too much for the Mountaineers to overcome on the snowy day. Prince-Tyson Gulley had touchdown runs of 33, 67, and nine yards for the Orange.

Penn State, participating in its first bowl game following sanctions imposed as a result of the university’s child sex abuse scandal, defeated Boston College 31-30 in overtime in front of 49,012. The Eagles missed their extra point in OT as the Nittany Lions responded with a touchdown and PAT on their ensuing possession to escape with the victory.

Duke won its first bowl game in 54 years, defeating Indiana 44-41 in overtime in front of 37,218. Ross Martin booted a 36-yard field goal in overtime to give the Blue Devils the victory. The teams amassed a combined 1,203 yards with the Hoosiers totaling 667 on 99 plays.

Northwestern, the underdog, upset No. 22/23 ranked Pittsburgh 31-24 in front of 37,918. Wildcats running back Justin Jackson had 224 yards and three touchdowns on 32 carries to lead the way.