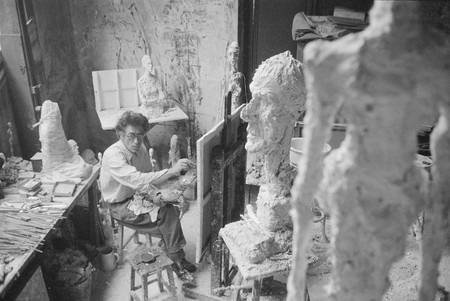 With a gaze extending beyond the emaciated, elongated figures that Swiss sculptor Alberto Giacometti is best known for, the Guggenheim’s eponymous retrospective delves thoroughly into the renowned artist’s practice through nearly 200 artworks—including sculptures, paintings, and sketches.

Though he worked across the modernist spheres of Surrealism, Cubism, and Expressionism, Giacometti (1901–1966) rarely escapes the haunting aesthetic that served as only one aspect of his multi-faceted oeuvre. The artist’s name conjures images of slim, towering figures seemingly made of molten grit—yet he deeply and expansively investigated the human condition over his four-decade career.

Giacometti is the first significant American museum exhibition of the artist’s work in over 15 years. Featuring the towering sculptures that visitors will recognize alongside plaster works and sketches that have never been exhibited in the United States until now, the Guggenheim’s current survey provides an intensive and long-awaited glimpse into the life and contributions of this influential artist. 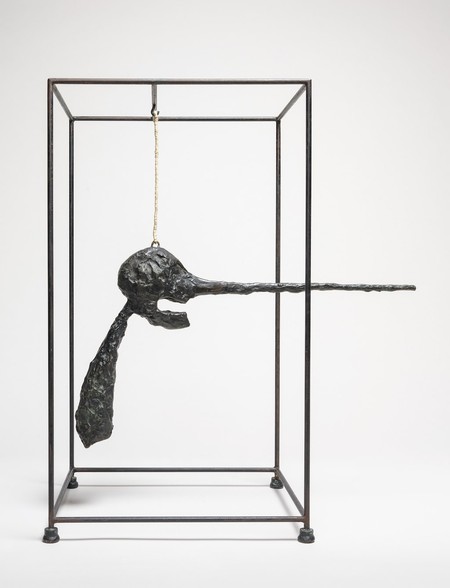 There’s a looming threat present in The Nose, an arresting and discomforting bronze, wire, rope, and steel sculpture. Though Giacometti forged this work after he parted from the Surrealists in the 1930s, The Nose possesses a fantastical, sardonic air. An anguished, hanging figure is imprisoned within the confines of a cell, though his exaggerated nose extends beyond the space in between the front bars. The sculpture is understood as a reaction to postwar trauma; though the subject may presumably swing outside the cell, he remains beholden to it by his head. 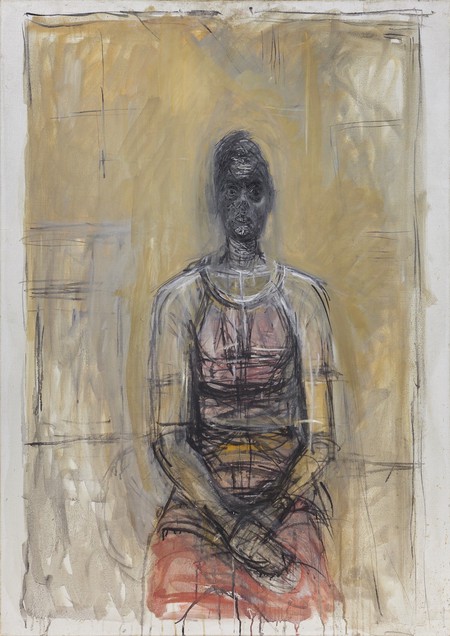 This oil on canvas rendering of “Caroline”—the pseudonym Giacometti used for a woman whom he met at a Montparnasse bar—is one of at least 30 portraits the artist created of this subject from 1960 until his death in 1966. The color of Caroline’s dress is unusual given Giacometti’s preferred earthen palette; however, the viewer’s gaze is drawn to the intensity of her grimacing face. 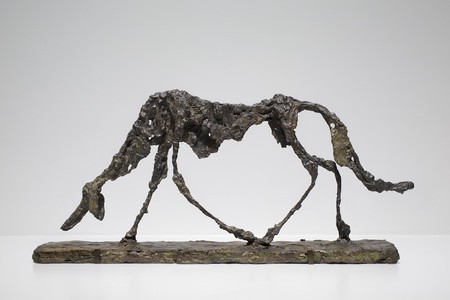 As Giacometti mainly rendered the human form, The Dog is one of his few animal depictions. His canine subject bears the same rough, overworked texture as standing men and women; but The Dog is unusual in that it was cast from memory. 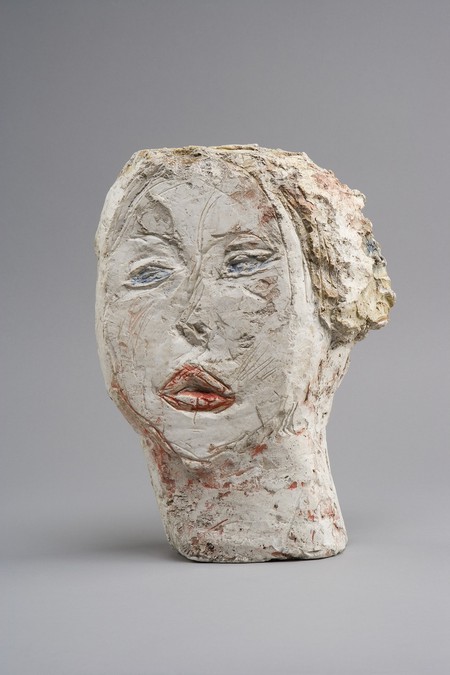 Early in his career, Giacometti ventured into the art of sculpting plaster. Head of a Woman (Flora Mayo) is an uncharacteristically colorful depiction of the artist’s former lover and muse, Flora Mayo. Mayo was an American-born sculptor in her own right, who crossed paths with Giacometti while they both took classes at the Academie de la Grande Chaumiere in Paris. The two parted ways when Mayo returned to the United States in the early 1930s. 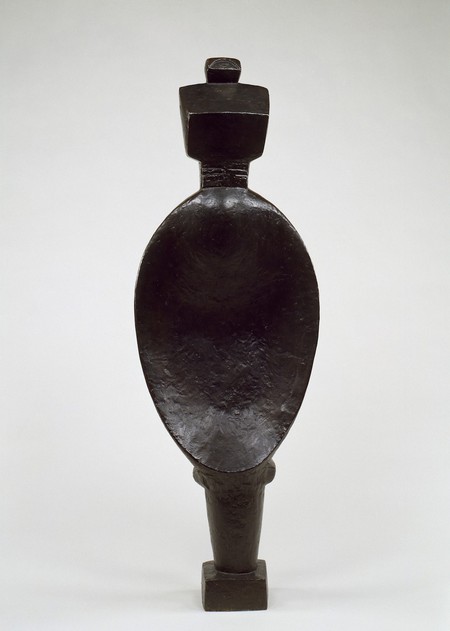 Giacometti’s bronze Spoon Woman evokes the smooth curves of Constantin Brâncuși’s influential modernist aesthetic, merged with the African and Oceanic aesthetics that so deeply inspired Giacometti throughout his career. More specifically, this sculpture was likely inspired by wakemia—ceremonial women carved by Dan artisans of West Africa. 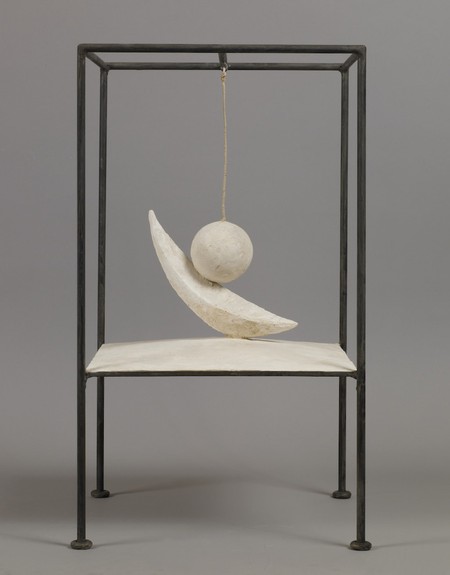 It was Suspended Ball that caught the eye of Surrealist leader André Breton when the sculpture was exhibited in Paris in 1930. The suspension of two geometric, almost celestial forms within an airy cage encapsulated the dream-like inscrutability that the Surrealists sought to manifest. Suspended Ball is considered one of Giacometti’s most important and pivotal works, and it would helm his brief transition to Surrealism through the mid-1930s. 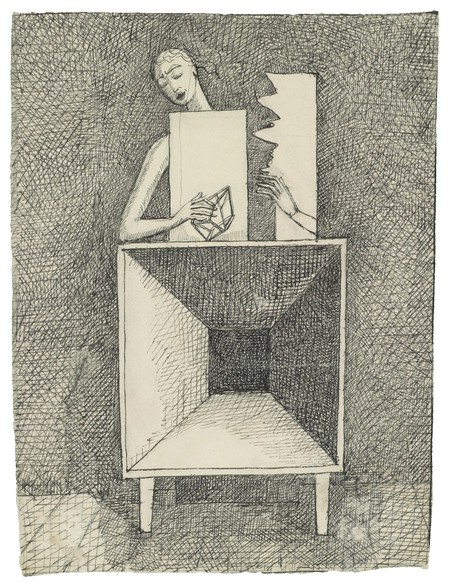 The cacophony of cross-hatching that envelopes the entire background of Giacometti’s Surrealist Composition fosters an illusory scene that plays with space, depth, and dimension. The Surrealists aimed to bleed the dreamscape into the waking world, where symbolic objects and figures exist and interact without blatant context. 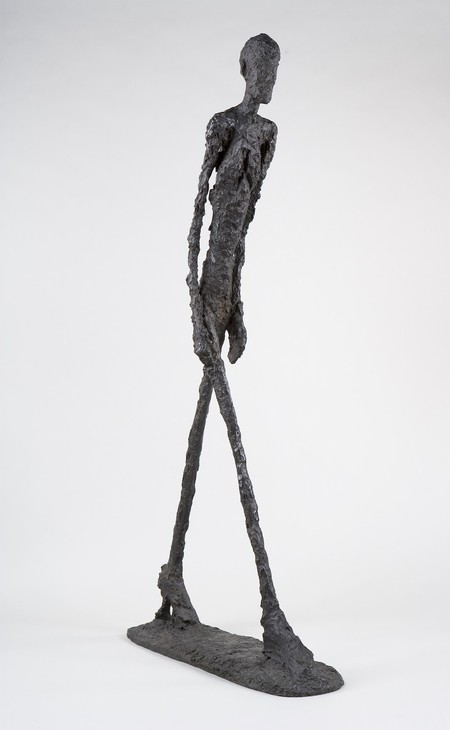 It wouldn’t be a Giacometti retrospective without the exhibition of his most celebrated postwar sculptures. Anchored into a bronze base by his oversized feet, Giacometti’s Walking Man I still communicates movement and stride—though his skeletal form evokes the hush of uneasiness that continued to disrupt postwar life.