Fascinating Native American Folk Tales That You Should Know

In a land full of rivers, mountains, lakes, and forest animals, the indigenous people used folk tales to pass down traditions. Native Americans have an incredible number of stories that have endured through generations, and they are all extraordinarily fascinating. 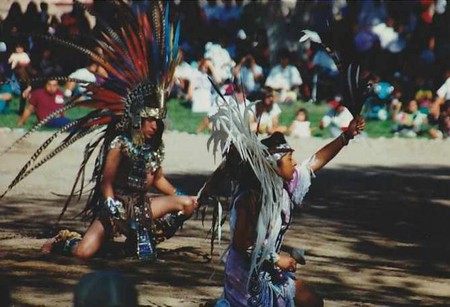 This first myth comes to us from the Inuit people, who lived and still live in the very northernmost parts of North America. They tell of Crow, who told them stories of the blue sky and the light that they did not have in the arctic. They begged him to bring it to them, and Crow flew south. He came upon a village in the sun and followed a young girl into the chieftain’s hut by turning himself into a speck of dust. He floated into a child’s ear and told him to play with the orbs of light that were in a box in the hut, and then to bring one outside. Then Crow changed himself back and took the ball of light in his beak and flew back North, once there the orb shattered on the ground and gave the Inuit people daylight. However, Crow was old and tired, he said that he must rest every six months before bringing the light again. So the Inuit people have six months of daylight and six months of darkness, and they are always kind to Crow.

The Maid of the Mist

The Ongiaras Tribe of what is now New York were a peaceful people who lived beside a great waterfall that was later named Niagara Falls. They have a number of myths surrounding the Falls, the most important of which is arguably the story of the Maid of the Mist. The tribe had suddenly fallen on hard times and many of their people were being killed in mysterious ways, when they decided to sacrifice the most beautiful maiden of their village to the falls. The maiden, wearing a white doeskin robe and flowers, stepped into a white birch bark canoe and fell over the Falls to her death. Her father, the chief, was heartbroken and soon followed her. Hinum, the thunder god that lived beneath the falls, gently caught the maiden in his arms and led her back to the cave where he lived with his two sons. The maiden married one of the sons, who told her that a giant snake was hurting her people. In spirit, the maiden warned her tribe of the danger and they mortally wounded the beast, which became the Horseshoe Falls. 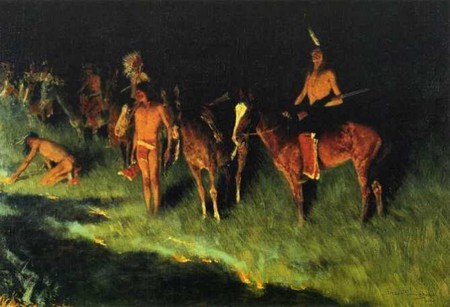 Hawaii has its own rich culture and history full of myths and legends, mostly surrounding the origins of the islands and the great volcanoes that created them. One that really stands apart and deals with love is the story of Ohi’a, a bold young man, and a beautiful maiden named Lehua. The two young lovers fell for each other at first sight at a bonfire, and were soon married. However, one day Pele, a goddess, came down from the volcano and saw Ohi’a. When he rejected her advances and returned to his wife Lehua, Pele was furious. She turned him into an ugly, twisted tree for spurning her. Lehua begged her to turn her into a tree as well, for she could never be without her love. The other gods above saw her weeping, and turned her into a beautiful red flower that bloomed on the twisted tree. To this day if you pick a red Lahua flower on an Ohi’a tree, the gods will send Lahua’s tears on the island in mighty rainstorms.

While there are many myths surrounding the beginnings of fire, this one comes from the Cherokee tribe that used to exist in what now is Alabama. The legend says that Bear first had fire, and carried it with him and his family wherever they went. One day in the forest, they found many delicious acorns on the ground, so Bear put the fire at the edge of the woods while they ate the acorns. They kept walking farther and farther away from Fire, until they could no longer hear Fire calling out to them. A human walking by heard Fire yell out ‘feed me, feed me!’ so he fed Fire sticks and twigs to revive it. When Bear returned, Fire was angry at him for leaving and chased him away with his bright light. Fire then belonged to Man, and they were both very happy.

Coyote and the Columbia

This myth comes from the Sahaptin people who live beside the Columbia River in Oregon. Coyote was walking along the road on a hot day, and since he was very hot, he said, ‘let there be a cloud.’ And so there was. He was still very hot, so Coyote said, ‘let there be rain from the cloud.’ And there was. Coyote then said, ‘I want a stream to walk in and cool off my feet.’ So a little stream came pouring down from the rain. It wasn’t big enough, so Coyote said ‘let there be more water.’ And then there was. Coyote was swept up in the river and nearly drowned, finally coming up on the shore of the new riverbed, almost dead. The lesson here, of course, is to not be greedy. 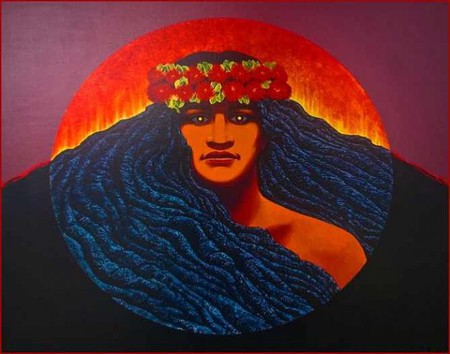 Another Inuit myth, this legend tells us of the first tears. In the story, a man is hunting for food to feed Woman and Son. He is hunting along the sea when he sees a huge herd of seals. He is glad when he spots one at the back that does not seem to see him. Man is so happy to see how fat and healthy this one is, it will feed Woman and Son for many days. When he is about to sneak up on the seal and kill it, suddenly the seal swims away into the sea. Man is very disappointed, and water starts to come out of his eyes. Woman and Son hear his cries and rush over to him from the Igloo. When he tells them of the seal, they too start to cry. This is the beginning of tears. Later, Man and Son catch seals and use their skin to create traps for future seals.

Why the Opossum’s Tail is Bare

In the beginning, many animals had long and bushy tails that they used to keep themselves warm, brush away flies, and wave about. Yet some animals had lost their tails in fights with other animals; one such animal was Rabbit, who was jealous of Opossum’s tail. Opossum’s tail was bushy and beautiful; he often strutted back and forth in front of the other animals waving it to show it off, and Rabbit decided to play a trick on him for his pride. Rabbit enlisted Cricket to pretend to comb it for the dance that night. While combing Opossum’s tail and wrapping it in a red cord, Opossum was soothed to sleep. When he woke, his tail was completely wrapped in red cord. During the dance, Opossum unwrapped his tail from the cord and danced in front of all the other animals, proclaiming how beautiful his tail was. The other animals cheered and laughed at him; while he was asleep Cricket had cut off every single hair. Looking down at his bald tail, Opossum was so surprised that he fell over in shock, much as opossums do today. 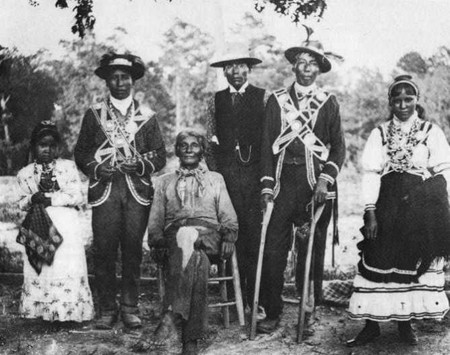 Choctaw Group | © Zewu~commonswiki/Wikicommons
Give us feedback