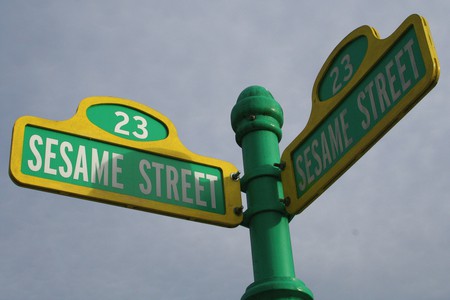 Manhattan is everything to everybody, an island of dreams that has lived on television since it first went on the air. Below are just a few choice depictions of Gotham’s range, from the gentrification-proof brownstone of Sesame Street to the gritty uptown of The Night Of.

By now surely the whole world knows that Tom’s Restaurant, down the street from Columbia University, was used for the exterior shots of Monk’s Coffee Shop, the gang’s ubiquitous hang-out spot in Seinfeld. Only slightly less familiar are Jerry’s apartment (at 129 W 81st Street) and Al Yeganeh’s soup stall (at 56th Street and 8th Ave), which inspired the famous “Soup Nazi” episode (the real Jerry Seinfeld is still banned for life).

Lucy and Ricky Ricardo resided at 623 East 68th Street, but any attempts to find their real Upper East Side apartment are doomed, as 69th Street runs straight into the East River in the mid-500s. I Love Lucy was unique for its time in that it was shot in front a live studio audience rather than relying on canned laughter, which Lucille Ball and the show’s producers intended to capture the live immediacy of radio, where she had established herself in showbiz.

One of the most syndicated franchises in the history of television went for deep dive into the annals of the New York City Police Department for this spin-off featuring high-profile cases investigated by Detective Bobby Goren (Vincent D’Onofrio) and his partner, Alexandra Eames (Kathryn Erbe). Criminal Intent also featured some of the strangest instances of Law & Order’s “ripped from the headlines” approach, with later episodes featuring Robert Carradine as a deranged chess master and Neil Patrick Harris as a Dahmer-esque serial killer.

Sex and the City

Nobody ever accused Sex and the City of not making the most of its Manhattan setting, as the city after-hours informed Carrie Bradshaw’s (Sarah Jessica Parker) columns (based on the real Bradshaw’s articles for the New York Observer), with an endless barrage of hip restaurants, insane Park Avenue hotels, and Carrie’s apartment at 66 Perry Street and Bleeker (which was removed from Sex and the City-themed tours after continued complaints from the real life residents).

The blueprint for every New York-based roommate relationship thereafter, the surprisingly durable Odd Couple starred Tony Randall and Jack Klugman as a pair of divorcees whose neurotically uptight/slob dichotomy consistently threatens to destroy each other’s sanity. Their address, 1049 Park Avenue, would likely be unaffordable today with the pair’s combined income of alimony payments and unreliable sports writing.

Originally developed under the name Insomnia Cafe, Friends requires a little suspension of disbelief when it comes to matching its aimless twenty-something heroes to their luxurious Manhattan condominiums—not to mention that the real Central Perk coffee shop is a Mediterranean restaurant called Little Own and the fountain from the opening (often mistaken for the Cherry Hill Fountain) is nowhere to be found. At least Chandler’s workplace, the Solow Building on Fifth Avenue, is real and even doubled for Mugatu’s headquarters in Zoolander (2001).

Unlike the many imaginary renderings of New York that film on L.A. sound-stages, Louie is recognizably shot in the real city and captures the borough in all its dubious glory. The opening sequence alone follows Louis CK from the West 4th subway station to Ben’s Pizzeria on MacDougal and finally the famous Comedy Cellar. Other notable locales include the East Village’s Veselka, the Olive Tree Café, and the Hudson Diner.

The fantastic HBO limited series The Night Of, in which the hapless Nasir takes the rap for the murder of a woman he inadvertently picks up outside of St. Mark’s Church in the Bowery, owes much of its accuracy to native New Yorker Richard Price’s screenplay. After stopping for gas within sight of the Broadway Line viaduct, the characters proceed to her 87th Street townhouse, only for it to become the scene of a grisly crime.

New York does have a famous Night Court, at 100 Centre Street, which is probably the one the producers of Night Court were thinking of, even if the building in the bass-heavy opening credits is actually home to New York’s Supreme Court. In the current television climate, it’s hard to believe that Night Court once passed for gritty, realistic television, though at least one of its repeat offenders went on to fame: “urban hillbilly” Bob Wheeler was played by Brent Spiner, later Data on Star Trek: The Next Generation.

Danny DeVito was working as a beautician just a few years prior to being cast as Louie De Palma, dispatcher for the Sunshine Cab Company on Taxi, which managed to retain some greasy Manhattan swagger despite being filmed in Los Angeles, thanks to memorable exterior shots of the Brooklyn Bridge and Dover Garage on Hudson Street and casting of actors with New York cred like Bronx-born Judd Hirsch and Long Island-raised comedian Andy Kaufman.

How do you get to Sesame Street? Well, it depends on whether you side with the show’s original art director, who claimed the show was on the Upper West Side, or its producer, who envisioned 123 Sesame Street as an Alphabet City brownstone. Either way, Bert, Ernie, and Elmo have evaded gentrification for almost 50 years, while Oscar the Grouch’s curbside trashcan has been joined by a recycling center and a compost bin.

Mozart in the Jungle

Few shows have utilized Manhattan’s highbrow arts scene with as much fidelity as Mozart in the Jungle. Although the New York Symphony where Gael Garcia Bernal’s maestro Rodrigo conducts is fictional, they’ve staged concerts at real-life locations like Rikers Island and the Washington Square Park arch in addition to the Public Theater on Lafayette Street, where the show’s orchestra normally plays.

In this All in the Family spin-off, George and Louise Jefferson relocate from working-class Queens to glamorous East 85th Street, where a deluxe “apartment in the sky” today sells for an average of $1,995,000. The last audiences saw them, the Jeffersons were doing well for themselves: after the show was abruptly cancelled without a finale, they appeared in the final episode of The Fresh Prince of Bel-Air and bought the Banks family’s house in Los Angeles.

In this innovative Carl Reiner-created sitcom, which ran from 1961 to 1966,Rob Petrie (played by Van Dyke) commutes from his New Rochelle home (his wife was played by the late Mary Tyler Moore) to the Manhattan studio where, in a reflexive twist, he’s a head writer for the fictional Alan Brady Show. The show endures in popularity and aired two colorized episodes in December 2016.

Marvel’s most recent Netflix superhero series was criticized for its inauthentic fight scenes, but one thing it managed to get mostly right was its Manhattan geography, which observed a Marvel tradition in setting its action in the real New York rather than an imaginary Gotham or Metropolis. Exteriors for the Rand Corporation were filmed at One Chase Manhattan Plaza, Colleen Wing’s Chinatown dojo on Munroe Street, and sinister Hatchet Gang’s lair at the Golden Sand Seafood Restaurant, while Danny’s old residence is in Gramercy Park.