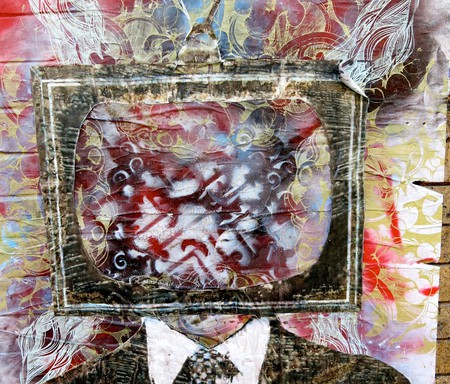 <a href="https://www.flickr.com/photos/gazeronly/10519053586/" target="_blank" rel="noopener noreferrer">"your filthy mind should get together with mine" (graffiti in Brooklyn) | © torbakhopper / Flickr</a>

Brooklyn has always dominated the small screen—even when it passes for downtown New York or Marvel’s increasingly nebulous “Hell’s Kitchen.” Just ask Brooklyn residents disrupted from their morning coffee by constant filming. Early TV shows often addressed fundamentally Brooklyn-esque themes of cultural or class difference or financial security, issues that still serve as ripe subjects for modern shows, which don’t simply mine the popularity of Brooklyn as a youth-destination—they interrogate and renew the borough of Ralph Kramden and Dev Shah.

Brooklyn has meant authenticity from the beginning: Jackie Gleason set The Honeymooners in the working-class Bedford-Stuyvesant of his youth, in a time when television rarely depicted realistic lower-middle-class domesticity. Bus driver Ralph Kramden’s infamous “One of these days…” catchphrase doesn’t play today, but the gritty truth behind the show—of a couple’s struggles in a multi-ethnic urban landscape of constantly broken appliances and the stress work places on marriage—are barely leavened by comedy.

For better and worse, the show that cemented the “hipster” in the popular imagination and launched a million think-pieces, Girls’ vision of delayed adults pursuing vaguely artistic careers while working dead end jobs in Williamsburg and Greenpoint barely existed in real life by the time the show finished airing. Still, Girls perfected the Brooklyn-centric template that has flourished onscreen ever since, not to mention Lena Dunham’s always-pertinent take on the illusion of success, crisis of early adulthood, and the self-seriousness of a certain brand of Tinder date. It doesn’t take living in Brooklyn to be moved by, but it does help.

The so-called Hell’s Kitchen of Daredevil and Jessica Jones looked suspiciously like North Brooklyn, but Luke Cage went even further, passing off trademark Brooklyn locales as Harlem. But no harm, no foul, as Luke Cage’s combination of musical revue and comic book action proved successful across all boundaries, even if certain touches (like the use of a portrait of Biggie Smalls that echoes the famous mural on Bedford) carry a special weight for Brooklyn-savvy viewers.

It’s hard to believe now, but between Welcome Back, Kotter and Saturday Night Fever, there was a time when John Travolta was Brooklyn. Alumni-turned-teacher Kotter teaches a diverse class of slackers known as “the Sweathogs” at a Bensonhurst high school modeled on the New Utrecht Training School (that is, N.U.T.S.), which just happens to have been the same high school attended by Scott Baio, David Geffen, and cult movie icon John Saxon.

Brooklyn Heights entered the lexicon in this mid-1960s sitcom following teenage twins Patty and Cathy Lane (both played by Duke), who moved to Brooklyn from California primarily due to more lax child labor laws. The move proved fortunate for Duke, who happened to be a native of Elmhurst, Queens, and presumably found Brooklyn less of a stretch. The changing status of Brooklyn was explored in a 1999 television movie, Still Rockin’ In Brooklyn Heights, that revisited the characters as adults.

Something of a counterpoint to Ralph Kramden’s Brooklyn, the idyllic family life of obstetrician Cliff Huxtable was a façade in at least one major way: the exteriors of the Huxtables’ Brooklyn Heights brownstone were shot in Manhattan’s Greenwich Village. All that notwithstanding, The Cosby Show epitomized an upwardly mobile Brooklyn and lead to a flourishing in African-American-centered sitcoms, nearly all of which took their cues from the Huxtables, from The Fresh Prince of Bel-Air to spin-off A Different World.

Brooklyn remains relevant even in the 31st century of Futurama as inadvertent time traveler Philip J. Fry was born in Flatbush, which he finds in ruins—though other parts of Brooklyn seem to have endured the natural consequence of gentrification, becoming the site of Past-O-Rama, where cowboys chase woolly mammoths and tourists can view Al Sharpton’s burial chambers and the historic 47th Street Butter Churns.

Of all the contemporary shows targeting the early-20s millennial permanent-intern demographic, the withering comedy Search Party is the one that nails the awkward empathy and social-media-trained hyper-awareness of recent graduates with the most painfully accurate results. Dory (Arrested Development’s Alia Shawkat) becomes invested in the disappearance of a college acquaintance (largely just to have a project to distract her from her unfulfilling life) and journeys with her friends, including a compulsive narcissist and a shallow actress, into a netherworld of cocktail bars (notably Ramona on Franklin and Greenpoint Ave) and Red Hook New Age cults that are uncompromisingly true to life.

Kat Dennings’s breakout role began as something of a cliché, featuring cash-strapped roommates in Williamsburg who work at a diner while dreaming of opening their own cupcake shop. But by its later seasons, 2 Broke Girls became surprisingly open about the dire straits faced not only by the generation that came of age just as the market collapsed but alspo the lives of the Ukrainian and Polish immigrants watching their longtime neighborhoods become hot twenty-something brunch grounds. Brooklyn’s past representation is also frequently spoofed: upstairs neighbor Sophie Kachinsky owns a cleaning company called Sophie’s Choice.

Perhaps the most stereotypically Brooklyn show ever made, Bored to Death features a Park Slope writer (Jason Schwartzman) who moonlights as a detective, advertising his services on Craigslist after finding his career flagging and romantic prospects mostly squashed. The show’s creator and lead character, Jonathan Ames, loosely based the show on his own experiences as a struggling writer, making for sharp observational comedy and often wince-inducing social stumbles courtesy of supporting actors Zach Galifianakis (as a comic book artist) and Ted Danson (as a magazine editor).

The crisis of options faced by young consumers is part of Aziz Ansari’s project with the acclaimed Master of None, partially set and shot in Brooklyn. Themes include contending with stereotypes—as both Dev Shah (Ansari’s character) and Taiwanese-American best friend Brian Chang find themselves romantically and professionally pigeonholed—and intersectionality, dramatized in second-season episode “New York, I Love You.”

As befits a show infatuated with ’90s-era techno-conspiracy thrillers and sporting a synth-heavy score, the Brooklyn of Mr. Robot is decidedly retro, with a secretive cabal of hackers called fsociety meeting in a disused arcade off Surf Avenue in Coney Island—which is anything but deserted even in the off-season—and frequently films at Flatbush’s Brooklyn College and Bushwick’s Paphos Diner.

A list of Brooklyn landmarks featured in Comedy Central’s Broad City would be never ending, but it’s the spirit of the borough rather than its geography that is the most perfectly captured by Illana Glazer and Abbi Jaconson as they face go-nowhere jobs, hedonism’s diminishing returns, and roommates who never leave the damn apartment. Broad City is second only to Search Party in its grasp of its fallible characters who are never treated preciously, and Brooklyn is not mined for hipster cache as much as explored for its mix of the bleeding edge and the perennial.

You wouldn’t mistake Fox’s Brooklyn Nine-Nine for premium cable programming—it’s a throwback to the TV sitcom format—but part of the joke comes from exploiting the cliché-ridden cop show and combining its tropes with Andy Samberg’s goofball detective and his Brooklynite cronies. The show it most resembles might be M.A.S.H., as the surprisingly durable Brooklyn Nine-Nine hasn’t shied away from tackling controversies in law enforcement through its madcap lens.