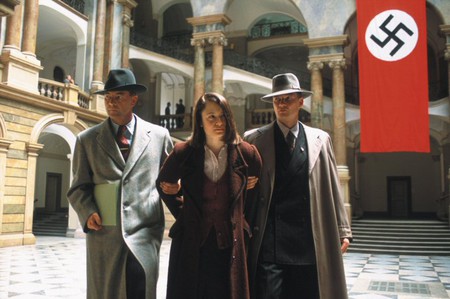 This year’s movies feature a curious but inspiring crop of protagonists who stand tall against human bulldozers – among them a violated Frenchwoman who pays back her violator in kind, a guilt-ridden Belgian doctor, an English carpenter who can’t use a computer, a retired Brazilian music critic, and a GI armed with bandages. We salute them and nine other heroic resisters here.

To put a cause before your life – as the 21-year-old anti-Nazi agitator Sophie Scholl did – is one thing. To then confront your interrogators with composure born of incontestable reason, knowing they are sharpening a guillotine blade, is another. Gracing Marc Rothemund’s docudrama-like Sophie Scholl, Julia Jentsch’s un-frilled portrayal of the Munich University White Rose resistance fighter (below), who was arrested by the Gestapo (top) on February 22, 1943 and beheaded a few hours later, is immaculate in its coolness. 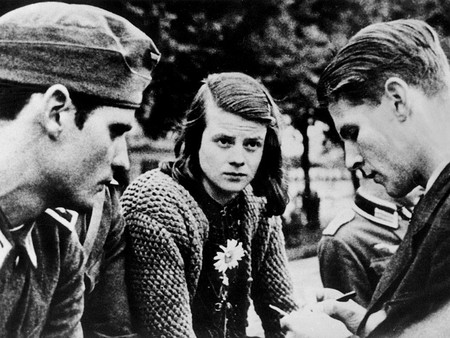 Mel Gibson’s ferocious World War II combat film tells the story of the Virginian conscientious objector and Seventh-day Adventist Desmond Doss (Andrew Garfield) who refused to bear arms but served as a medic with the US Army. Under heavy fire at Okinawa, Doss saved fifty downed riflemen of the 77th Infantry – maybe more. The fresh-faced Garfield posits Doss as a humanitarian alternative to deadly WWI hero Alvin York, but Gibson’s exorbitant poeticizing of the bloody carnage nullifies the pacifist message. 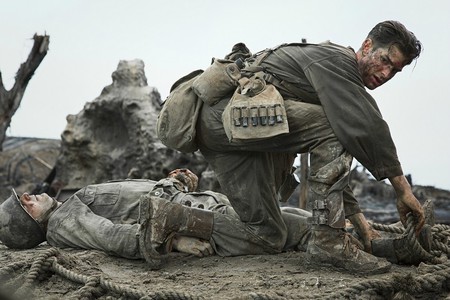 In Jean-Pierre and Luc Dardenne’s searching drama, overworked doctor Jenny (Haenel) ignores an after-hours caller at the clinic she’s managing in a rough section of Liege. News of the woman’s subsequent death fills her with guilt – but it proves a liberating force. Turning detective, Jenny discovers the woman was an immigrant who’d been forced into prostitution, and she makes a life-changing sacrifice. Haenel is formidable in her restraint – Jenny becomes an everyday saint minus affectations of saintliness. 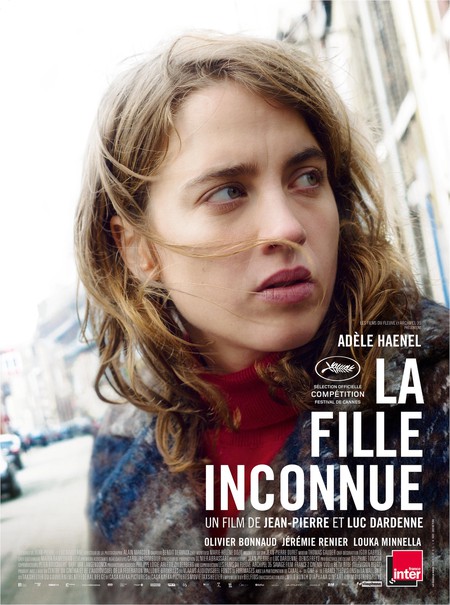 Many of Ken Loach’s films center on the routine betrayal of working people by those who are charged with leaping them. A hardworking Newcastle carpenter prevented from working by his heart condition, Dave Johns’s Daniel is callously steered into a maze of bureaucratic and digital obfuscation by a state job center and is denied the welfare sickness benefits that will enable him to survive. The protest he makes is scarcely radical – but it declaims government perfidy in emphatic black and white. 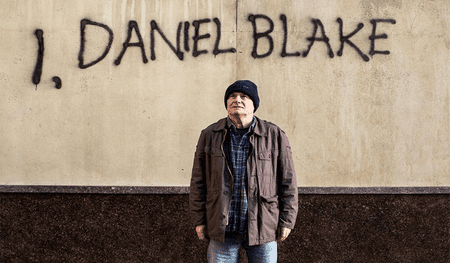 Mark Ashton (1960-1987) was the co-founder of the Lesbians and Gays Support the Miners group that rallied to the support of Britain’s beleaguered mining community during the cataclysmic 1984 strike. Beyond his impertinent quiff, there’s nothing outré about the American actor Ben Schnetzer’s portrayal of Ashton in Matthew Warchus’s upbeat comedy drama Pride, which depicts LGSM’s self-billeting on the Welsh mining village of Onllwyn. The thaw that sets in and prompts chauvinistic locals to embrace their visitors is largely attributable to Ashton, played with calm, dignity, and aplomb by the excellent Schnetzer.

On an epic cattle drive from Texas to Abilene, the cool, pragmatic ramrod Matt leads a mutiny against John Wayne’s tyrannical trail boss – his adopted father. The climactic fistfight pitches Clift, as slender as a girl, against Wayne’s monolithic bulk. Director Howard Hawks’s greatest Western honors male professionalism, as did many of his films, but it also functions as a post-war parable about the struggle between labor and capital. 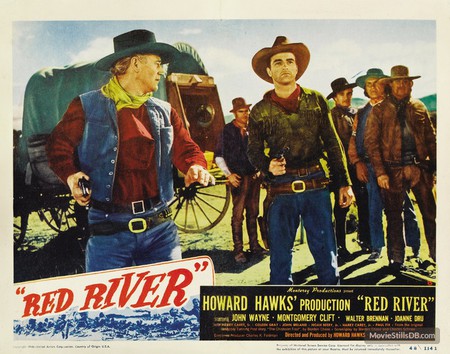 Another Montgomery Clift film, another principled Garth. It’s hard not to see the bloodline of Red River‘s Matt in Jo Van Fleet’s Ella Garth, the 89-year-old matriarch who, in Elia Kazan’s Depression-era melodrama holds out against the Tennessee Valley Authority’s attempt to purchase her family’s island in the Tennessee River before it floods the land. Fleet, miraculously, was only 45 when she played Ella, a wily bastion of anti-New Deal rhetoric. Not unsympathetic as the TVA man sent to persuade her to sell up, Clift found himself sharing the screen with an adversary as ornery as Wayne’s.

In Kleber Mendonça Filho’s trenchant drama, which depicts a contest between individualism and traditionalism on one hand and corporate greed and corruption on the other, the first lady of Brazilian film and TV gives a career performance. Like Ella in Wild River, Braga’s Clara – a sensual widowed musicologist living in a gorgeous seafront property in Recife – is determined to hold onto her home. Clara’s arc is different to Ella’s, however. Serene for a long stretch of the movie, she switchblades into red-hot fury and fights fire with fire as the real-estate company seeking to evict her stoops to the foulest of tactics. You wouldn’t want to mess with her.

Tom Courtenay in ‘The Loneliness of the Long-Distance Runner‘ (1962)

Social misfit Colin Smith (Courtenay), the anti-hero of “angry young man” author Alan Sillitoe’s story, is a borstal (reform school) inmate whose distance running skills carry the institution’s hopes when it competes against a posh public school in a prestigious cross-country race. Having outflanked the field, Colin does something unthinkable to thwart the hypocritical governor who wants to bask in his reflected glory. Tony Richardson’s film was a howl of youthful anti-establishment defiance that anticipated Mike Leigh’s Meantime and Alan Clarke’s Made in Britain. 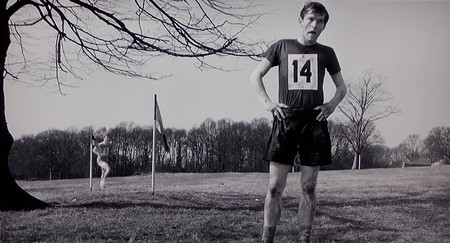 The awarding of seven statuettes to Out of Africa and none to Steven Spielberg’s The Color Purple (from its 11 nominations) on Oscar night 1986 remains one of the great miscarriages of justice in Hollywood history – and it smacks of racism. Despite the allegations that Spielberg’s adaptation prettified Alice Walker’s story, it’s impossible not to regard the moment when Celie (Goldberg) points a poker at her brutal husband (Danny Glover) as pivotal in the cinema’s representation of feminism, black or white. 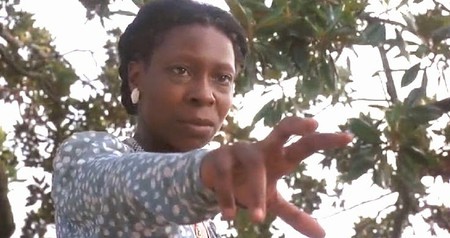 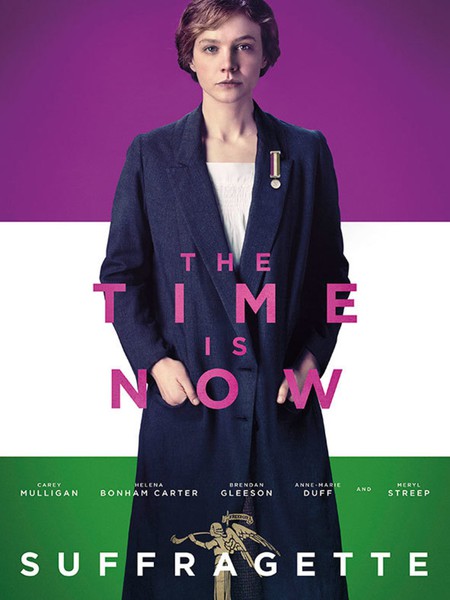 Raped at home by a masked intruder, video game CEO (and serial killer’s daughter) Michèle picks herself up, dusts herself off, and decides that the next time they “have sex,” it will be on her terms. Isabelle Huppert slips like mercury through Paul Verhoeven’s black comedy about the refusal of victimhood. It’s not only one of her greatest performances, it’s one of her drollest.

Ian Hart’s working-class Liverpudlian Communist is the sympathetic protagonist of Ken Loach’s Spanish Civil War drama. Yet the most passionate member of the Marxist militia with whom he enlists is Blanca – a slip of a girl and his sometime lover – whose ideological commitment to the cause brooks no wavering. Rosana Pastor’s steely performance made her the spirit of the movie. In 2015, the Goya-winning actress and left-wing activist was elected as a Member of Congress for Valencia. 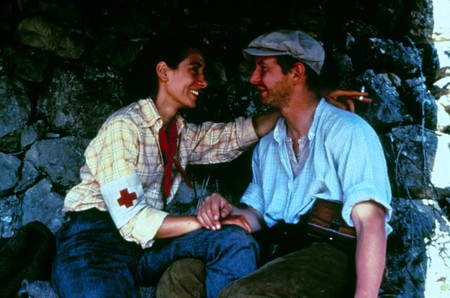 This bracing biopic of the London new wave rocker Dury (Andy Serkis) enfolds his attack on the British charity industry. Partially crippled by polio at age seven, Dury was angered by insensitive attempts to recruit him as an ambassador for 1981’s International Year of the Disabled. He responded with the single “Spasticus Autisticus,” which rousingly co-opted Kirk Douglas’s “I’m Spartacus!” rallying cry from the Stanley Kubrick epic.