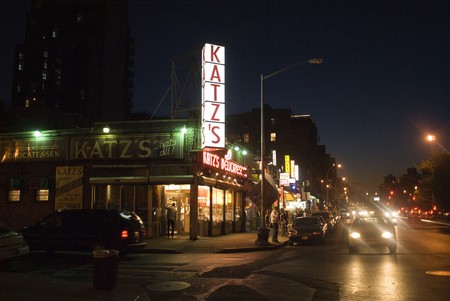 Manhattan is instantly recognizable from its countless appearances in film and television — you can hardly walk down a block without getting that weird feeling of déjà vu that comes from being in the most-photographed city in the world (besides L.A. and Vancouver, which are often trying to pass for NY anyway).

While natives might shrug at the ubiquitous presence of film crews and the occasional disruptions in traffic due to the filming of an action movie set piece, visitors to New York usually have a couple of tried-and-true landmarks in mind. Unfortunately, Manhattan is also one of the fastest-changing locales on the planet, so famous restaurants and exteriors are often closed or unrecognizable. Here are a few of the borough’s longest-enduring hotspots, courtesy of movies from Breakfast At Tiffany’s to American Psycho. 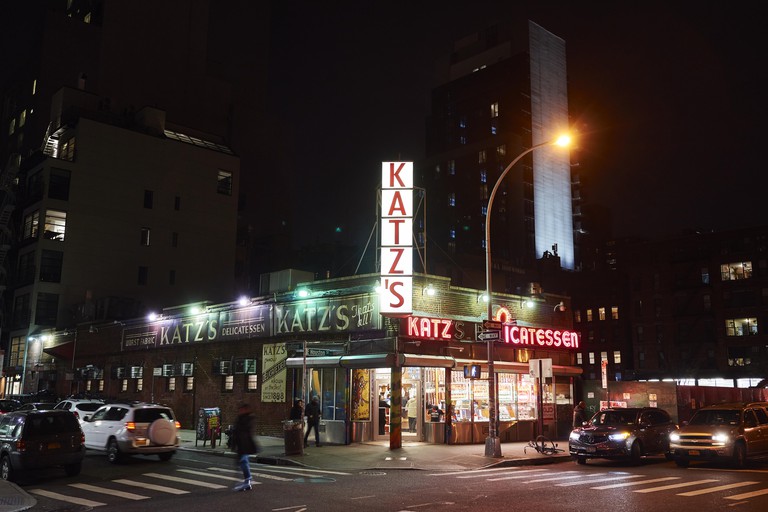 Katz's Delicatessen (est. 1888), a famous New York City restaurant, is known for its Pastrami sandwiches. | © Tommy Liggett / Shutterstock
Book Now
Any discussion of New York City landmarks inevitably begins with two movies: Ghostbustersand When Harry Met Sally, the latter partly set at Katz’s Delicatessen on Houston Street on the Lower East Side. But Katz’s doesn’t need Meg Ryan for its claim on Manhattan distinction – with its cavernous interior filled with signed portraits of movie stars and city luminaries, it is an institution all on its own.

Restaurant, American, 0
Facebook
Email
Twitter
Pinterest
Copy link
Share
Similar to Katz’s, Sardi’s interior is decked out in signed photographs — memorably parodied on television’s The Critic— and is a well-known tourist eatery with a central location (in this case, Times Square). But the best onscreen appearance to Sardi’s has got to be Muppets Take Manhattan, when Kermit’s portrait comes to replace that of an irate Liza Minnelli.

Building, Library, Park
Facebook
Email
Twitter
Pinterest
Copy link
Share
Map View
Given the choice between the emblematic firehouse and the New York Public Library — just two of the highly-visible NY locales checklisted in 1984’s Ghostbusters —we say, err on the side of the library, with its famous lions and pigeon-covered front steps in the center of scenic Bryant Park.

Park, Building
Facebook
Email
Twitter
Pinterest
Copy link
Share
Map View
Extending from Canal Street to Broome between Bowery and Lafayette, Little Italy was once much larger — the second Godfather movie catches the district in its prime, during the ecstatic Feast of San Gennaro, but it is still well worth a visit today.
https://youtu.be/qJr92K_hKl0 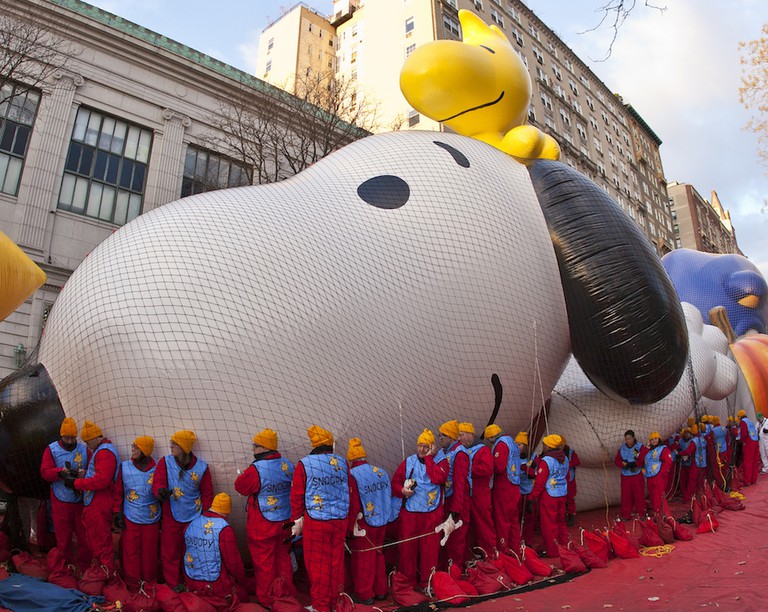 87th Annual Macy's Thanksgiving Day Parade | © Anthony Quintano, Flickr
Miracle On 34th Street is more than an extended commercial for Macy’s (it’s a holiday classic after all, and probably the most-recognized Christmas story after Charles Dickens’ A Christmas Carol), but Manhattan’s most celebrated department store certainly gets a lot of screen time, making the store a site of December pilgrimages to this day. 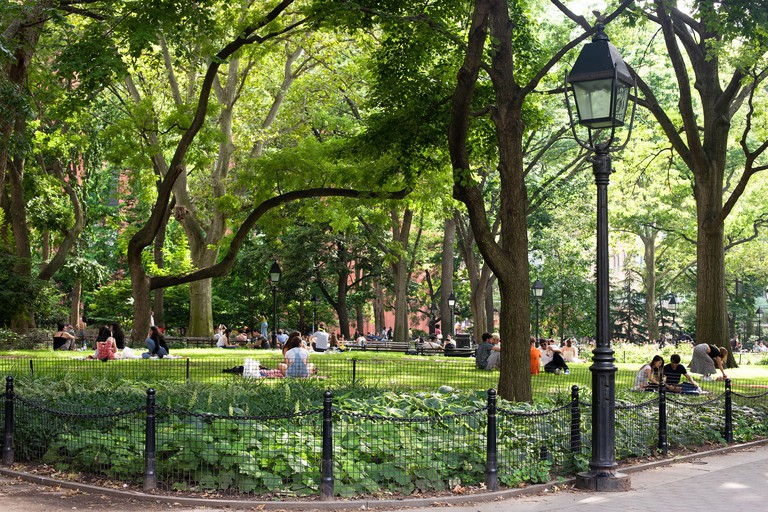 People relaxing on a Summer afternoon scene at Washington Square Park in Manhattan | © Littleny / Alamy Stock Photo
Kidswas the most controversial movie of its era, but time has made it an art-house classic, with its unflinching depiction of urban New York City skater kids. With only a few exceptions, its stars were cast from the crew of teenagers who hung around Washington Square Park, where the movie is partially set — something that the cast has frequently complained about since, as the public often fails to distinguish between actor and fictional character.

The swanky 21 Club is a natural location for Wall Street, Oliver Stone’s “greed is good” 1980s mission statement, where Gordon Gecko (Michael Douglas) takes lunch with his acolyte Charlie Sheen. Beginning as a speakeasy during the Prohibition era, the 21 Club went on to become the site of the original “power lunch”.

Pizzeria, Restaurant, American
Facebook
Email
Twitter
Pinterest
Copy link
Share
Map View
Joe’s is far from the only Manhattan pizza joint to have appeared onscreen in blockbuster movies, but the central location — just off Bleecker Street — and overall excellence of the food makes it worth mentioning for its cameo in the original Tobey Maguire Spider-Man, where the erstwhile Peter Parker is briefly a delivery boy. 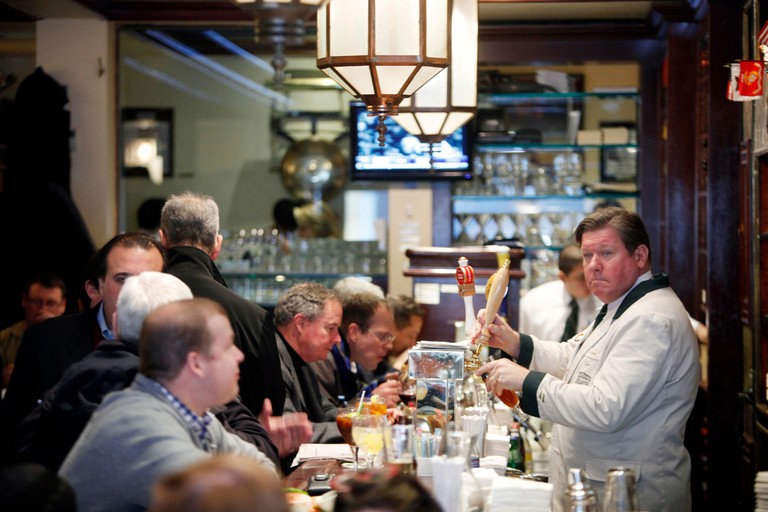 The original novel on which 2000’s American Psycho is based made an art out of product placement, with every song, suit, and restaurant that happens to catch the homicidal interest of Patrick Bateman getting a lengthy soliloquy. The film version kept many of these, including a seminal scene at clubby steak joint Smith & Wollensky. 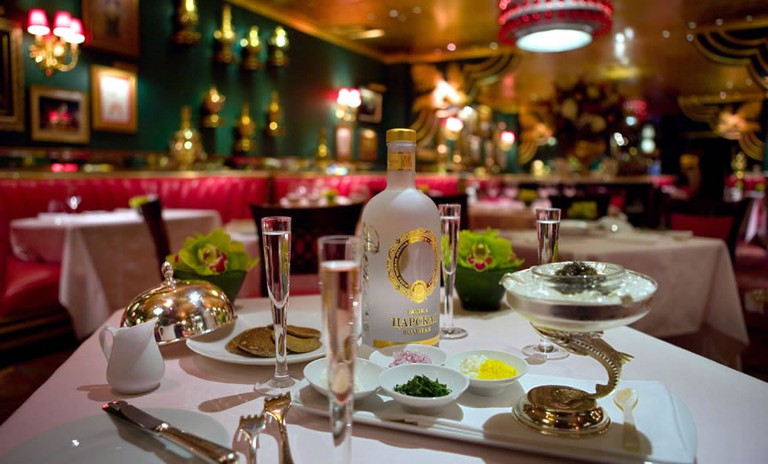 “Opulent” doesn’t begin to cover the famous Russian Tea Room, whose hipness and high-price vodka are a bit of an in-joke for New Yorkers. Perhaps its most famous onscreen appearance was in 1982’s Tootsie, where a cross-dressing Dustin Hoffman goes to untraditional lengths to revive his character’s acting career. 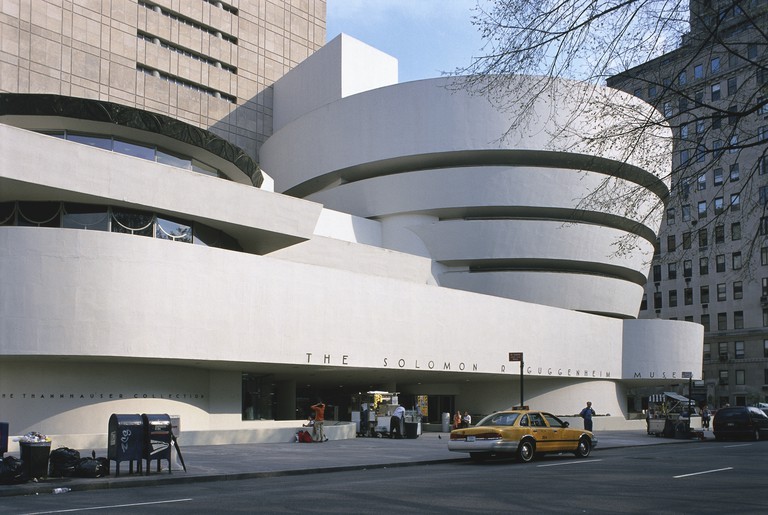 Park
Facebook
Email
Twitter
Pinterest
Copy link
Share
Map View
New York highways have hosted many on-screen chases and crashes over the years, but one of the best and most death-defying, has got to be that from Vanilla Sky, filmed uptown on Riverside Drive, which disfigures a womanizing Tom Cruise in the English-language remake of the Spanish film Open Your Eyes.
Give us feedback