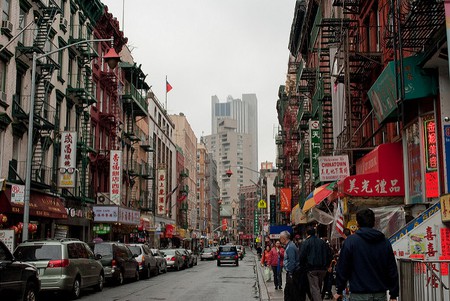 Manhattan’s Chinatown is more than a neighborhood, it’s one of New York’s most recognizable areas, home to the largest concentration of Chinese in the western hemisphere and a natural destination for tourists who frequent its outdoor markets, partake of its festive evenings, or simply eat lunch at Joe’s Shanghai.

Unsurprisingly, Chinatown has also had a vivid life in motion pictures, making early appearances in detective fare like Torchy Blane in Chinatown (1939) and the musical On The Town (1949) – in which it is treated as an essential element of the modern city – prior to its current status as a mainstay of chase scenes and dining room set pieces (recall Seinfeld’s famous “Cartwright!” gag). And then there are the films in which it is allowed to be more than a shorthand for NYC diversity and displays its real-life locations and culture. Below are our choice of films that show off Chinatown in all its rush-hour hubbub and streetlit vivacity.

Without a doubt, one of the most-requested tourist stops in Chinatown is Wu’s Diamond Garden Seafood restaurant, where Will Smith and Tommy Lee Jones hit up an elusive alien for information in Men In Black 3 and take part in an epic fight in Wu’s crepe-paper and neon-lit establishment which would, of course, never fit inside the often-cramped quarters of the real Chinatown.

For an authentic Chinatown drama that examines the duality of American/Chinese culture, look no further than the excellent Saving Face, starring Twin Peaks’ Joan Chen. Essentially acted in two languages, Mandarin and English, Saving Face makes the most of its Chinatown setting in this tale of a Chinese-American surgeon’s struggle to come out to her traditionally-minded mother.

For a movie about hell, Devil’s Advocate spends a lot of time in Manhattan. Al Pacino’s Satan takes a stroll through Chinatown with Keanu Reeves’s impressionable lawyer winding up on Houston after cutting through the intersection at Mott and Canal, at one point standing directly in front of the United Orient Bank.

Given Chinatown’s reputation as an exotic food haven, perhaps it is inevitable that a film based entirely on an illicit gourmet club’s quest to eat a Komodo Dragon should feature it at some point. Marlon Brando spoofs his Godfather character The Freshman‘s jaunt around the island of Manhattan, which wouldn’t be complete without hapless film student Matthew Broderick stopping over in Chinatown along the way.

Year of the Dragon, Michael Cimino’s story of a Vietnam vet-turned-cop (Mickey Rourke) fighting Chinese gangs in New York, certainly makes the most of its location, but proved controversial for its depiction of the Asian community, resulting in a disclaimer that runs over the opening credits.

Darren Aronofsky’s dazzling Pi locates the home of its puzzled mathematician hero in Chinatown, where his mental isolation is driven home by his status as a minority in the neighborhood and by the squalid state of his apartment. Asked by Filmmaker magazine about his ethnically diverse cast after the movie’s release, Aronofsky replied, “Well, that’s Chinatown.”

Lurid thriller 9½ Weeks features a Chelsea gallery worker (Kim Basinger) who romances Mickey Rourke’s Wall Street broker after meeting him – where else? – in Chinatown, which forms the original backdrop for a romance so steamy that the film is available in at least two cuts: a tepid R-rated one or the much-more acclaimed unrated edition.

Woody Allen’s comedy Alice is set in motion when its titular heroine (Mia Farrow), hoping to rejuvenate her love life, purchases a mysterious herb from the redoubtable Dr. Yang (Keye Luke) in Chinatown. The culture clash between pampered, upper-class Alice and the exotic world into which she descends is made painfully clear in an early sequence in which her limousine struggles to make tight turns through the area’s twisting streets.

The film that killed the Spider-franchise (for a whole three years until the latest reboot), The Amazing Spider-Man 2 centers on Peter Parker’s fateful romance with Gwen Stacy (Emma Stone), whom he meets outside of the Nom Wah Tea Parlor, the same dim sum eatery that previously appeared in films like Radio Days and King of New York.

Abel Ferrara is justly famous for his utilization of New York locations and King of New York, starring Christopher Walken, makes the most of its setting, particularly in a Chinatown shootout between Walken’s henchmen and the Chinese Tong gangs, in which Ferrara returns to the environs of his 1987 film China Girl.

Spike Lee’s Oldboy transplants the violent 2003 South Korean revenge flick of the same name to New York’s Chinatown, where Joe Doucett (Josh Brolin) is taken prisoner by a mysterious captor. One clue, discovered midway through the film, is that the food Joe is daily fed in captivity comes from the same Chinese restaurant.